Everything you wanted to know about black holes, supernova, and quasars but were afraid to ask. 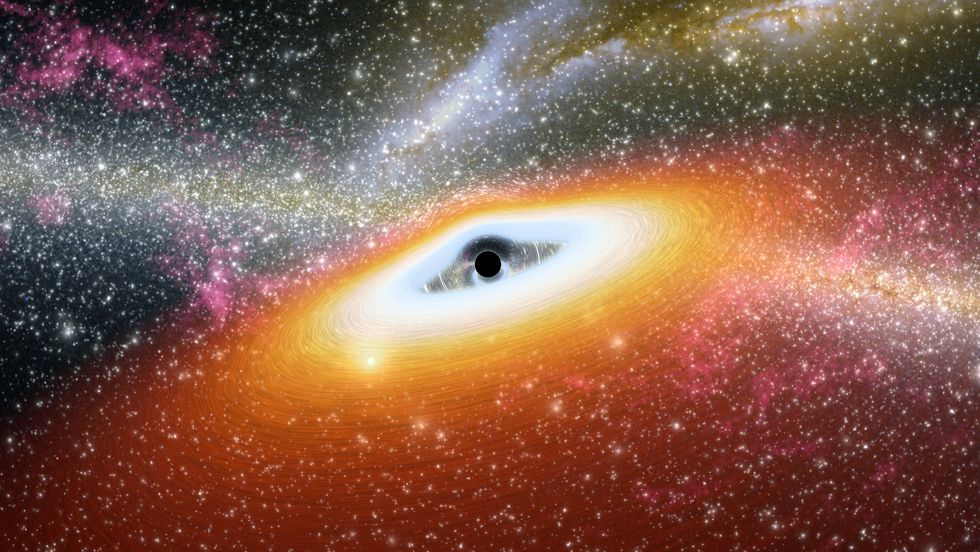 This artist's conception illustrates one of the most primitive supermassive black holes known (central black dot) at the core of a young, star-rich galaxy. (Photo by: Photo12/UIG via Getty Images)

In the vast outreach of space, there exist cosmic events so unbelievably strange and powerful, they’ve changed the way we view the universe and ourselves in it. The inhuman distances make dimensional and spatial comparison difficult to accomplish. But that hasn’t stopped us from looking out into the stars and trying to make sense of it all. Over the past nearly three decades, we’ve used the Hubble Space Telescope to look out into the universe.

Current estimates for some time have pointed to there being some 100 - 200 billion galaxies in our observable universe. Some astrophysicists believe that this could be underselling the real estate of the cosmos and think that there could actually be 2 trillion galaxies in total. Either way, the observable universe as we know it is unfathomably big, and that’s without taking into account string theory and other possible dimensions. Within this great universe nestled in the heart of faraway galaxies and outer rims of places millions upon billions of light years away, we look into some of the most fascinating phenomena in outer space. The quasar pistons that fire off from the mysterious black hole engines of your universe, cascading and dying stars that shine brighter than a whole galaxy for a few universal moments; these are the giants of the macrocosm.

Artist's rendering of the accretion disk in ULAS J1120+0641, a very distant quasar powered by a black hole with a mass two billion times that of the Sun.

Black holes and the quasar blast

Black holes are objects that have an incredible amount of mass and density, so much that not even light can escape the confines of its gravity. The theory of black holes’ existence has been around for nearly two centuries. While it’s still impossible to directly see a black hole, the advent of space telescopes with special tools allowed us to detect them. We’re able to find black holes due to the effects of gravitational attraction on the stars and planets around them. Scientists have proved that there is most likely a supermassive black hole at the center of every galaxy.

Black holes come in varying sizes. Some can be as small as a single atom, but its mass as dense as a mountain range. Stellar black holes are around the mass of our Sun, these are usually created when a large star explodes in a supernova. Supermassive black holes are many million times the mass of the Sun.

One of the latest natures of black holes to be discovered was the blast of star-like objects emitting from galactic centers. This is the quasar, which is a jetlike stream of energy in epic proportion compared to other space objects around it. These two occurrences in the universe go hand-in-hand. Hubble has been able to get a better grasp on both supermassive black holes and quasars. Some black holes are 3 billion times the mass of the Sun with equally powerful quasars jets and glowing discs of material surrounding it. European Space Agency (ESA) astronomer Duccio Macchetto stated that:

"Hubble provided strong evidence that all galaxies contain black holes millions or billions of times heavier than our sun. This has quite dramatically changed our view of galaxies. I am convinced that Hubble over the next ten years will find that black holes play a much more important role in the formation and evolution of galaxies than we believe today. Who knows, it may even influence our picture of the whole structure of the Universe...?"

For a long time, one of the most perplexing questions in astrophysics was the mechanism behind quasars which are intrinsically linked with these black holes. Short for “quasi-stellar radio source,” a quasar is one of the brightest known objects in the universe. Some are believed to produce 10 to 100 times more energy than the entire Milky Way in a space confined to the size of our solar system.

A majority of quasars are billions of lightyears away from earth and are monitored by measuring the spectrum of their light. While we don’t know the exact operations behind a quasar, we do have a few ideas. Current scientific consensus leads to astronomers to agreeing that quasars are produced by supermassive black holes which are consuming the matter around them. As the matter is sucked into the hole and spins around, large amounts of radiation in the form of x-rays, visible light rays, gamma rays and radio waves are blasted off. This type of churning chaotic friction created by the gravitational pull and stresses then erupts and the escaping energy forms the quasar. The connections between quasars and black holes are intrinsically linked. Supernovas are also responsible for the creation of black holes. The way that all of this adds up is slowly coming together as scientists and astronomers put the cosmic pieces in their place.

Astronomers have discovered a giant supernova that is smothered in its own dust. In this artist's rendering, an outer shell of gas and dust -- which erupted from the star hundreds of years ago -- obscures the supernova within. (Photo by: Universal History Archive/UIG via Getty Images)

Historical discoveries of quasars and supernova

Quasars were discovered in 1963 by Caltech astronomer Maarten Schmidt, this discovery was instrumental in supporting the Big Bang theory. Schmidt spotted the first quasar while working at the Mt. Palomar Observatory. It was at first mistaken for a star as it was billions of light years away. Thanks to the telescopes at Mount Palomar at this time and the advances in radio astronomy, the universe was beginning to become a lot bigger of a place –nearly increasing tenfold at the time.

Maarten Schmidt was studying radio waves emitting from something called Source 3C 273. He thought it peculiar that the radio signals seemed to be coming from a star. The spectrum produced bright spectral lines and hydrogen gas emissions that were shifting into different wavelengths. Redshift and blueshift describe how lights shift towards different wavelengths to determine if the objects are moving closer or further away from us.

“An object with that red shift must be located billions of light-years away. It must be brighter than a million galaxies to appear as bright as a star at that great distance.”

This would lead to 3C 273 becoming known as the first quasar. Following this discovery, many more quasars throughout the universe would be found – some even further away than 3C 273. As we gazed back in time, scientists garnered further evidence for the big bang and were able to chart out the history of younger galaxies in the early universe.

But this wasn’t the first time that distant objects in the night sky were mistaken for stars. Various times in human history, even before the telescope was invented – humans discovered supernova which they mistook for regular stars.

A supernova is an exceedingly bright start that lasts for only a moment in time. It is the end of a star’s life. A supernova can briefly outshine a whole galaxy and produce more energy than the Sun in a matter of moments. NASA considers the supernova to be the largest explosion that takes place in space.

One famous supernova that we know today as the Crab Nebula, was seen throughout the world around 1054. Korean astronomers recorded this explosion in their records and Native Americans may have been inspired by it according to their rock paintings dated to that time. The supernova was so bright that it could be seen during the day.

The term supernova was first used in the 1930s, by Walter Baade and Fritz Zwicky when they witnessed an exploding star called S ANdromedae or SN 1885A.

A supernova is the death of a star and there are a whole lot of stars in the universe. On average, it’s predicted that a supernova occurs once every 50 years in a galaxy like the Milky Way. That means that a star is likely exploding every second somewhere in the universe.

Scientists are getting better at witnessing these types of events. In 2008, astronomers witnessed the initial act of the explosion. For years they’d predicted an outburst of X-rays, which was confirmed as they watched the evolution of the explosion right from the start.

As our telescopes grow larger and become more advanced, we will be able to dive into the secrets and intricacies that these phenomenon display. They may be distant but are important to understanding the pillars and foundations of what holds up our universe.