The Seven Wonders of the Ancient World were marvels of architecture, human ingenuity, and engineering on a scale that even the greatest artists of contemporary times would have a hard time replicating today. These man-made structures were all built sometime during the classical era and stretched across the current known western-world at that time. In books and writings that reference the historian Herodotus (484 – 425 BCE) and Callimachus of Cyrene (305 – 240 BCE) from the Museum of Alexandria, scholars over the years discovered the lists of the seven wonders of classical antiquity.

The list we currently reference today was compiled in the Middle Ages and only includes places that the ancient Greeks had visited or conquered. Only one of the seven ancient wonders still stands – and arguably one of the most famous ones at that, the Great Pyramid of Giza.

From a time spanning roughly between 2650 – 3rd Century BCE, these masterpieces dotted the landscapes for a variety of purposes. Some were great tombs housing the remains of powerful kings, monolithic statues praising great deities and others were frankly just about testing the limits of what was possible in the early technological and civilized prowess of mankind.

While the majority of these constructions were destroyed, in 2007 over 100 million people voted to declare a New Seven Wonders of the World. Many of these places are UNESCO Heritage Sites (UNESCO was not responsible for this new list,) but nonetheless, people felt that these newly championed wonders represented a shared global heritage throughout the entire world.

This new list is equally as monumental and powerful as the one that preceded it, boasting such man-made creations like the Roman Colosseum or the Incan city of Machu Picchu. There have been many differing lists put out through the years with some criteria even including natural wonders of the world.  The only official list – due to Herodotus’ efforts which has stood the test of time – is the original ancient wonders of the world.

So without further ado, this is the full ancient list in its entirety. 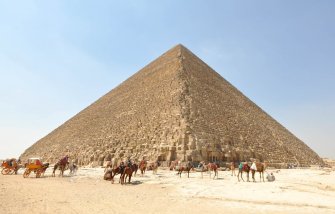 The Great Pyramid, commissioned and built by the Pharaoh Khufu, is one of the oldest buildings in existence. It is 456 ft. high and thought to be nearly 4500 years old. It is the largest and oldest of all of the ancient pyramids. Its magnificence and construction has puzzled scholars for years. It’s made of some 2 million stone blocks that weigh around 2 to 30 tons each.

Recently in 2013, archaeologists discovered the first primary historical document during the construction of the pyramid. Logbooks over 4500 years old titled the Diary of Merer recorded the daily activities of workers who helped build the pyramid. These papyri described the transportation of limestone from a harbor nearby. It is the only ancient wonder still in existence. 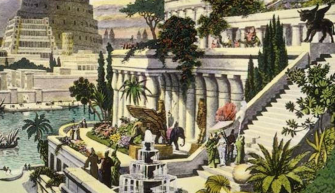 The Hanging Gardens of Babylon were supposedly built around 600 BC. Herodotus claimed that the walls stretched for 56 miles, 80 feet thick and reached 320 feet high. Records state that it was destroyed by an earthquake in 1st century BCE. Their existence is debated as the history was not chronicled in Babylonian records but through exterior sources. According to ancient sources, the gardens were built by Babylonian king Nebuchadnezzar II for his wife Amytis in 600 BCE.

The Hanging Gardens were most likely built as huge rooftop gardens with foundations of multi-level terraces. With a column structure, they would have been filled in with dirt to allow large areas of plants and trees to grow. Over the years as this lush vegetation began to grow over the sides, it would give the effect that the plants hanging down were floating in a mountain landscape. This would have been a sight to behold in Babylon. 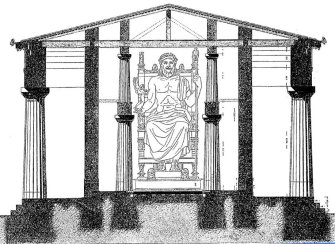 Statue of Zeus at Olympia, Greece

The Statue of Zeus was sculpted and built in 435 BCE. It was 40 feet tall and stood for hundreds of years before being destroyed by Christian leaders in the 5th and 6th centuries. The statue was a chryselephantine statue – made of ivory and gold. There are no remains of the statue nor were there many picture representations of it either. Doubts remain about the full scope of this wonder, but there is much to be known about Zeus’s builder, Phidias an Athenian sculptor.

The Statue of Zeus resided in a temple in the City of Olympia, which was an important cultural center for the ancient Greeks. It was home to the original Olympic games and its patron deity was the God of Gods Zeus. Descriptions of the statue are sparse but it’s believed that the parts of the body were made of ivory, while Zeus’ beard and clothes were made of gold. A coin from that time shows his likeness and archeologists post that he would have been holding a Victory in his right hand and scepter in his other hand. The cloak was ornamented with many bright colors. Temple of Artemis at Ephesus

The Temple of Artemis took over 120 years to be built before being completed in 550 BCE. It was dedicated to the Greek goddess Artemis. Ephesus was a Greek Colony in Asia minor and the construction project was sponsored by King Croesus of Lydia. Many ancient accounts were awestruck by the beauty of power that this structure elicited.

It was supported by 127 60 foot columns, with the max height of the temple standing 425 feet high and stretching back some 225 feet. In 356 BCE, a man named Herostratus sought out to set fire to the temple. His reasoning was to achieve everlasting fame and be associated with destroying something so wonderful. The Ephesians wanted to make sure his name would not stand the test of time, but historians wrote it down anyways. Years later, Alexander the Great would propose to rebuild the temple but the Ephesians refused. 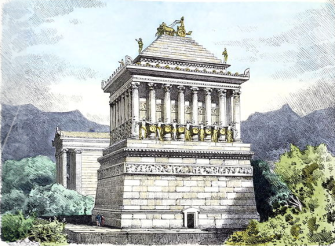 The Mausoleum of Maussollos at Halicarnassus was built in 351 BCE and rose to around 135 feet high. Its status as one of the seven wonders of the ancient world doesn’t derive from its size or strength, but because of the intricacies of the sculpture reliefs it had to adorn its four walls.

The building was designed by Greek architects and four leading sculptors who were responsible for each side. There were 36 columns and 10-foot statues of Greeks battling Amazons, marble chariots and step pyramids leading to the pinnacle of the structure. Some of these pieces of art have survived today. It was damaged over time by a number of earthquakes before being totally destroyed and ransacked in 1494 by European Crusaders. 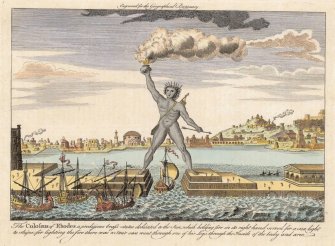 The Colossus of Rhodes was a statue dedicated to the god Helios. It was constructed between 292 and 280 BCE. At 110 feet tall it overlooked the harbor of Rhodes and stood on a base similar to the Statue of Liberty – which was modeled on the Colossus. The statue was commissioned after the Rhodians defeated an invading army in 304 BCE. Notably, the statue only stood for 56 years before being knocked out by an earthquake.

The statue was made purely out of bronze. Its ruins had become an attraction for over 800 years following its fall. Some ancient sources claimed that some of the fingers of the Colossus were larger than many statues at that time. Eventually, the ruins were sold to a Jewish merchant in 654. 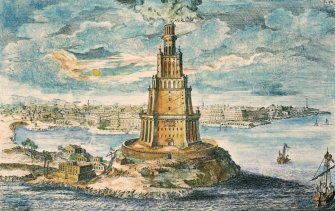 Its construction was completed in 280 BCE. It was the third tallest building following the pyramids. A mirror built inside the lighthouse allowed it to be seen as far our as 35 miles into the sea. It was built with a square base and topped off in a circular fashion to build it out to its final height. Many depictions can be found throughout the historical record.

If you see a political movement embodying all of these traits, watch out.
Up Next
Surprising Science