A key thought experiment, the "tragedy of the commons," is widely misunderstood, especially among certain kinds of economists. Elinor Ostrom won a Nobel Prize for showing how irrational they can be. 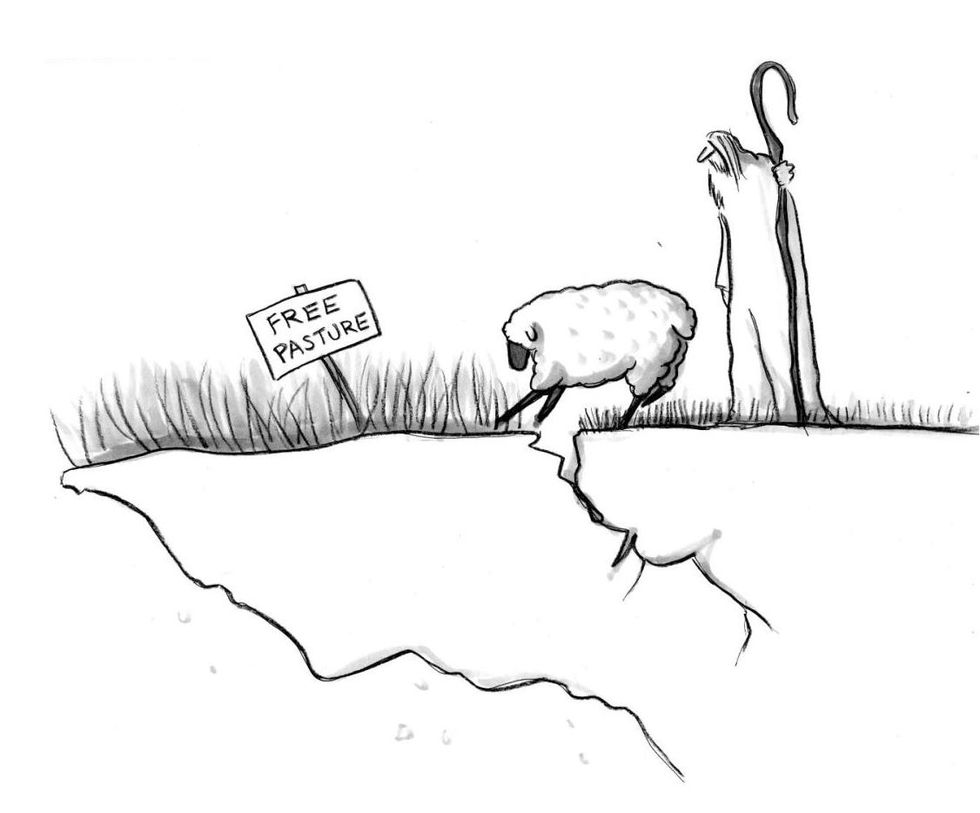 This is diablog 7 between David Sloan Wilson (DSW, head of the Evolution Institute and author of Does Altruism Exist?) and me (JB).

1. JB: Humans basically can’t survive without cooperating (~economics) and sharing resources (~politics). Both of which risk a “rational” doom through “tragedy of the commons” thinking.

2. JB: Garrett Hardin popularized this rational parable of herdsman destroying a public pasture. Since “each ... seeks to maximize his gain,” and anyone can profit by adding cattle (grazing is free) everyone will, thus ensuring overgrazing and collective tragedy.

3. JB: But you’ve worked with Elinor Ostrom, who showed how groups commonly overcome Hardin’s mistaken logic. Can you explain his error and Ostrom’s work?

4. DSW: Hardin just ignored common social controls. Ostrom studied how real groups around the world manage their common resources, and derived eight design principles for avoiding overexploitation. Her findings — that groups can manage common resources without property rights or top-down regulation — so surprised economists that they awarded her (a little-known political scientist) the 2009 Nobel Prize.

5) DSW: My related collaboration showed that the evolutionary dynamics of cooperation in all social species map nicely onto Ostrom’s principles. Groups can only work well if they suppress disruptive self-serving behaviors (e.g., by using social controls to prevent overuse of common resources).

6) DSW: Ostrom’s work on modern group collaboration converges with Boehm’s work on the genetic evolution of human teamwork. And the Evolution Institute has created online resources (called PROSOCIAL) to help any group use Ostrom’s principles.

7) JB: Ostrom’s work illustrates how unrealistic and unrational economist-style thinking can sometimes be. Hardin’s herder scenario was first used (~1830) to counter “invisible hand” beliefs, by showing how self-interest could create bad outcomes (see spontaneous disorder). Harding later said that it’s only in an “unmanaged” commons that self-interest and freedom “brings ruin to all.”

9) JB: Surely pitting self-interest against collective self-preservation is stupid and irrational. Especially in markets (~the most powerful social forces on earth) self-maximization must be prevented from becoming systemically self-destructive.

Know your needs. Don’t damage what supplies them. Don’t let others either — or you’re doomed.

Communities either heed that logic of “needism,” or they perish.

For the next post in this diablog series, click here (Is Economics Built On A "Monumental Mistake?").

Illustration by Julia Suits, The New Yorker Cartoonist & author of The Extraordinary Catalog of Peculiar Inventions