Is Evolution Teeming with Unseen Teamwork? (Second in Diablog Series)

Many believe that evolution plays only ruthless "red in tooth and claw" games. But that view tends to ignore that nature is teeming with unseen or underappreciated teamwork. 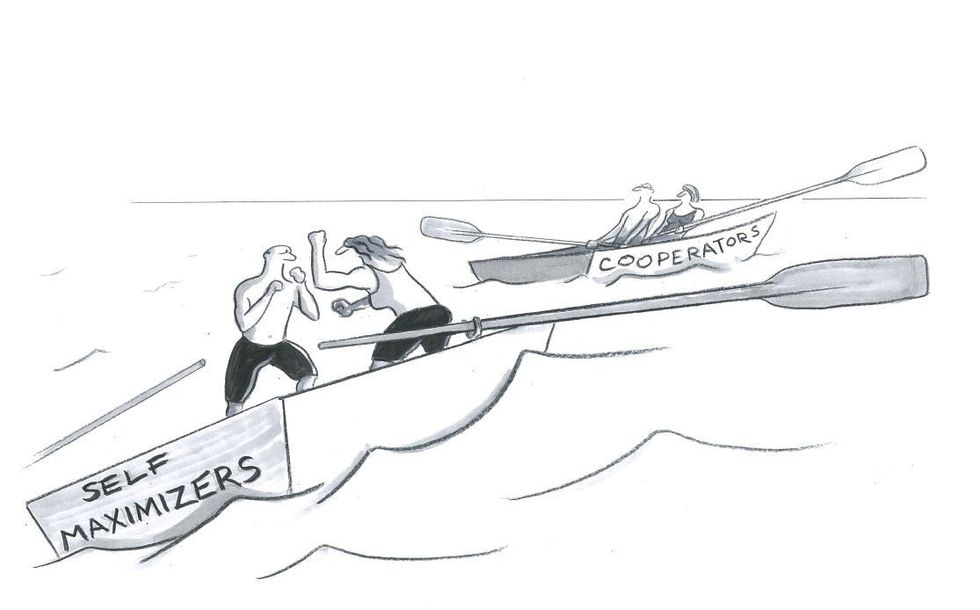 This is the second in a diablog series between David Sloan Wilson (DSW, head of The Evolution Institute, author of Does Altruism Exist) and me (JB).

Evolutionists often use a selfishness vs. altruism frame that, strictly speaking, doesn’t seem logically complete. Its neat “self OR other” carving excludes cooperation wherein both “self AND other” gain (not at each other’s expense). And “self or other” logic doesn’t help distinguish useful kinds of “others” (teammate, co-breeder, friend, foe, food, etc.).

Genes compete “selfishly” against their rivals (alleles) for a single slot in future generations. But if they don’t cooperate well with every other gene in their body/vehicle/team, they reduce their own survival prospects. Evolution seems at this level to have a built-in “for the team” logic — or at least a “not at the expense of the team” logic.

Within vehicles, the game isn’t zero-sum like Monopoly; it’s like a rowing crew — I can’t win unless my teammates win. And my gaining at my teammates’ expense likely weakens the boat. That sort of selfishness can become self-sinking.

DSW: I must hammer home the relentless logic of relative fitness. Natural selection works only on fitness differences, and multilevel selection theory locates the relevant differences in a nested hierarchy.

Typically, the relevant fitness for a gene in an organism isn’t different than for the other genes in the same organism. They are all in the same boat, and their fitness at the team/body/vehicle level is what counts.

But sometimes genes do increase at the expense of other genes within the same organism (intragenomic conflict), just as members of sports teams sometimes play to advance selfish interests at the expense of the team. That creates opposing levels of selection.

In your Monopoly and rowing examples, selection at one level is unopposed by selection at other levels, which makes them evolutionary no-brainers. However, fitness differences can exist between (a) genes within organisms, (b) individuals within groups, (c) groups within multigroup populations ... and so on.

Many people (including scientists) reason about evolution by heuristically imagining an individual choosing between two traits. They assume that what will evolve is what the individual would choose. Thus, a rower considering rowing hard or slacking off can see that she’ll only benefit if her team wins. So it’s smarter to row hard and that’s also what’s naturally selected.

But in more complex cases the relevant fitness differences aren’t as clear, and can exist at multiple levels. Individual heuristic thinking can’t substitute for a proper model.

JB: OK, so we agree that evolution’s games aren’t always simply competitive. Built-in cooperative elements complicate life, and create openings for counterproductive selfishness. Certain relative fitness gains (if harmful to necessary others/teammates) can sink your own boat. And such team/vehicular relationships exist not only in evolution; they’re common in politics, economics, and everyday life. Let's stop ignoring their logic.