Every Selfish Gene Must Also Cooperate

Is ruthless selfishness natural and rational? The idea that this is just how “selfish genes” and evolution work is unnaturally selective. Without certain kinds of cooperation, no gene can survive (that's using the term cooperative in a similar metaphoric way that genes can be described as "selfish"). 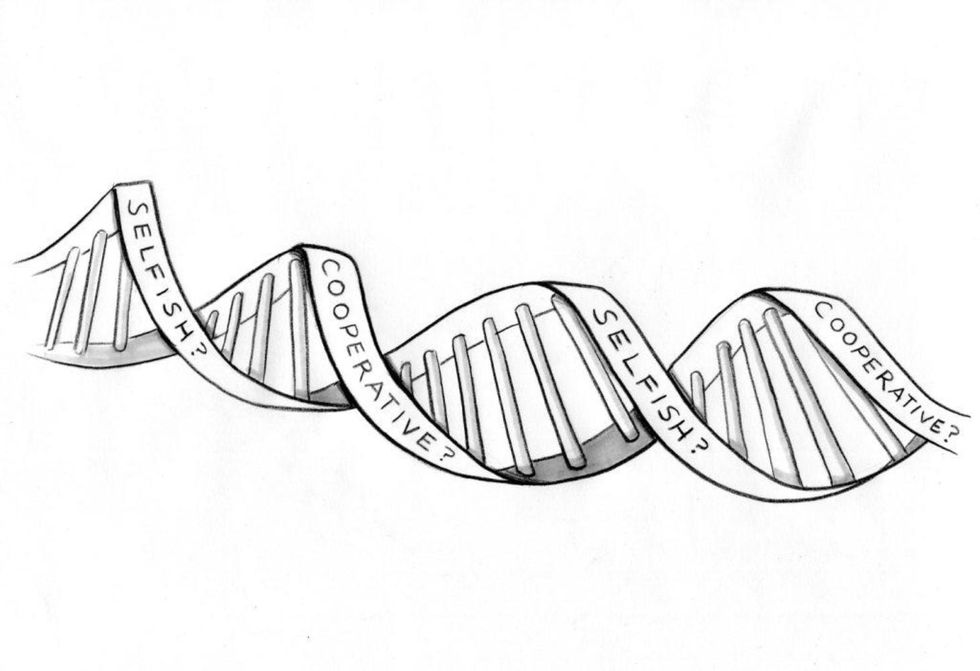 Is "ruthless selfishness" natural and rational? The idea that this is just how “selfish genes” and evolution work is unnaturally selective. Here’s why:

2. In The Selfish Gene, Richard Dawkins popularized, spectacularly, the idea that selfishness is natural. In stellar prose Dawkins presented his ideas so successfully that they became influential beyond the book’s readership. But The Selfish Gene had an oddly selective focus and contained “rogue sentences.” E.g., “a society based simply on the gene’s law of universal ruthless selfishness would be a very very nasty society.” In getting individuals to “cooperate generously and unselfishly towards a common good, you can expect little help from biological nature ... because we are born selfish.”

3. Dawkins focusses on selfishness and altruism, defining X as altruistic if it increases “another such entity’s welfare [Y’s] at the expense of its own. Selfish behavior has exactly the opposite effect.” His scheme is binary and zero-sum: X gains by Y’s loss. It accurately describes genes competing against their alleles (their variants) for the single slot of dominance in future populations. But Dawkins’s selfishness and altruistic aren’t the only logically possible outcomes, e.g., X and Y both lose, or X and Y both gain. While many biologists confuse cooperation with altruism, using Dawkins definitions, win-win cooperation is neither selfish nor altruistic. Regardless, evolution doesn’t ignore cooperation’s advantages.

4. For Dawkins the devil isn’t in the details, but in straying too far from them. He over-extrapolates from incomplete categories, and commits a “fallacy of composition.” Those involve extending properties of parts inappropriately to wholes. An absurd example is: Each atom in a teacup is invisible, therefore the teacup is invisible. Similarly, projecting a “selfish” zero-sum property of genes onto everything built by genes, to conclude everything that has “evolved ... should be selfish” is mistaken (if, using Dawkins’s definition, selfish gain is at the expense of others).

6. Dawkins does describe needed cooperation: Every “selfish” gene needs a vehicle (body) and its many other genes (at least 181) for the “intricate cooperative venture” of propagation. Genes that cooperate well with vehicle mates prosper. Those that harm their vehicles don’t. So Dawkins’s “little help” from nature is actually a selection for certain kinds of cooperation.

7. Sadly the cooperative aspects of evolution aren’t so well known. And those “rogue sentences” have lent the shield of science to the bad idea that a “universal ruthlessness” governs biology. Cooperation abounds. All genes need it.

8. Game theory led Dawkins to modify his initial position; he subsequently wrote about how in evolution “cooperation and mutual assistance can flourish.” Studying “the Prisoner’s Dilemma” proved that cooperating generously can be an evolutionarily stable strategy, with higher productivity than selfishness.

10. In the 30th-anniversary edition, Dawkins noted that “‘born selfish’ is misleading,” and asked readers to, “mentally delete that rogue sentence and others like it.” Sadly, the unsimple details of nature’s mix of competition and cooperation haven’t spread as successfully as the initial rogue proclamations.

11. The cooperative aspect of genes in vehicles provides a cautious general maxim. Nature selects against all that damages the vehicle(s) it depends on. Just as no gene can survive without its vehicle, neither can parts of any interdependent aggregate (e.g., individuals of an interdependent social species need others in their survival vehicles). This “vehicular viability” logic maps evolutionary and logical limits to selfishness. We’re likely the first species to know this, or to have any non-genetically determined choice about the matter.

The pop science of selfishness needs an upgrade. Cooperation, selfishness, and altruism are all natural and rational. Each is sometimes fittest for the circumstances. Dawkins says he could have called his book The Cooperative Gene. Evolution would be better understood if he had.