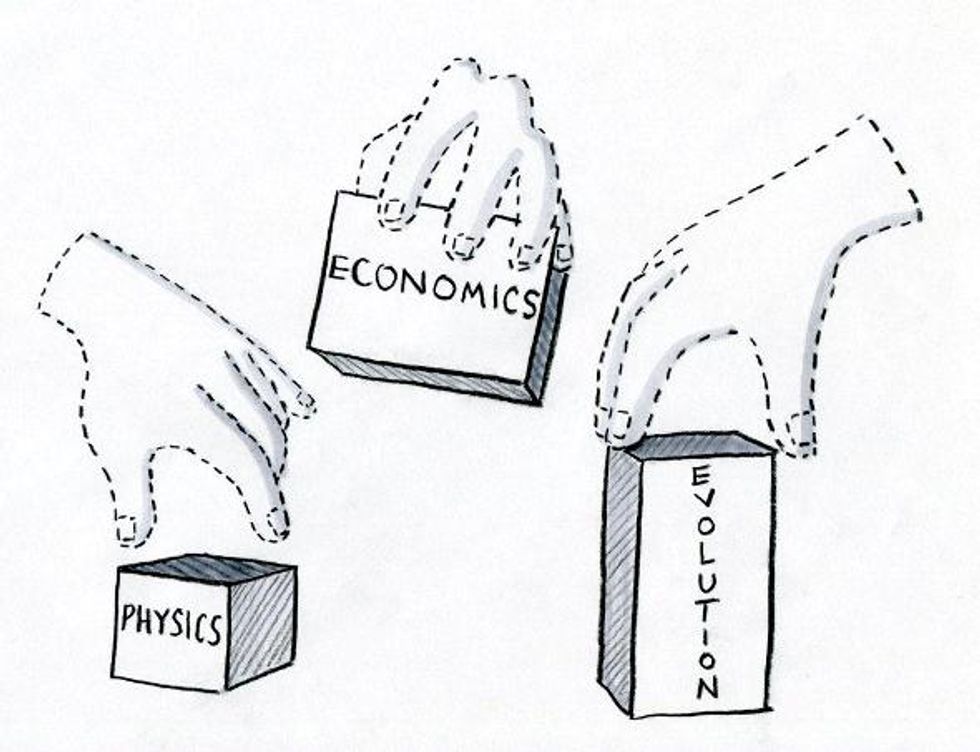 Metaphors can be our shortest stories: their compact explanations often shape our view of the truth. But like stories taken out of context, badly mixed metaphors from biology and physics mislead many economists. And Shakespeare’s “invisible hand” is partly to blame. Here's how:

2. Adam Smith popularized the “invisible hand” idea. He lectured on Shakespearean imagery and would have known of the line “And with thy bloody and invisible hand” in Macbeth. Smith first used the phrase in his History of Astronomy: “nor was the invisible hand of Jupiter ever apprehended to be employed," meaning no hand-of-god was needed to explain astronomy.

3. Perhaps the most prominent “invisible hand” in biology is in evolution, where we know it produces unintelligently, undesigned results. Yet competition in biology doesn’t guarantee efficiency (“tree trunks are standing monuments to waste”) and regularly delivers foreseeable disaster. Unless it’s intelligently guided, competition in economics can be as dumb as trees.

5. Newton’s science is metaphorically and structurally different than Darwin’s. Newton’s systems have closed causality and converge on mechanically calculable patterns. Physicists have good mathematical tools for predicting their specific results. But Darwin described open, generative, and divergent processes with less predictable outcomes. The shapes of these processes are stable, but their resulting “endless forms” aren’t as pre-calculable. Economics, though it loves physicsy-math-tools, has unavoidable evolution-like aspects (and evolutionists don’t find physicsy-math-models to be that useful).

Nature gave us tools to avoid the dangers of dumb “invisible hand” self-organization. Perhaps the point of being human is to use our evolved capacities for foresight and intelligent social coordination to organize a relationally rational way to live.