Pythagoras was a cult leader, Socrates loved to dance + 8 other revelations

Philosophers often get depicted like sages in ivory towers without a practical or human side. A gossip-filled book from the 3rd century can fix that. 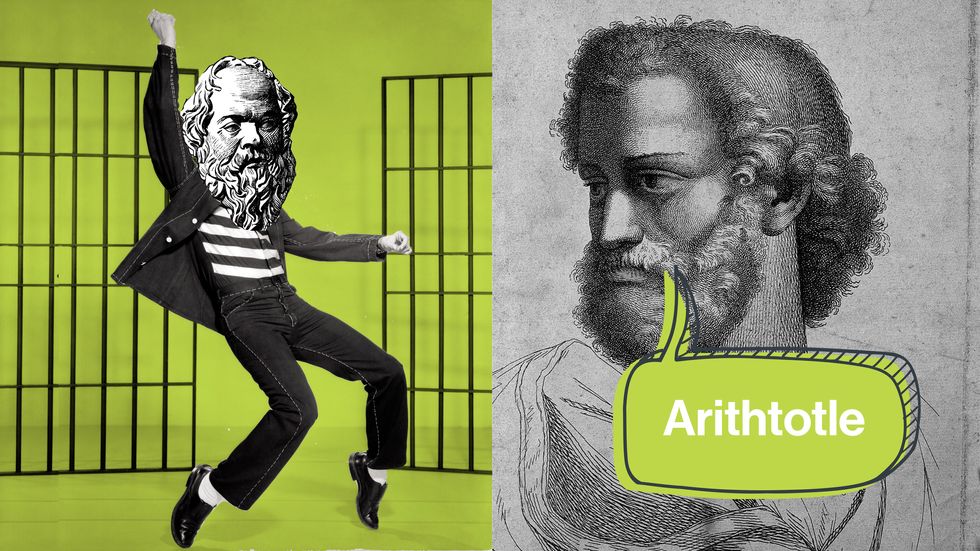 People have been gossiping about celebrity lifestyles since the dawn of fame, but we often focus our attention on the lives of actors, athletes, and attention seekers. Famous academics and philosophers usually get a little more privacy.

This doesn’t mean their lives are any less interesting, however. An entire book, Lives of the Eminent Philosophers by Diogenes Laërtius, was written on the subject in the third century. A new edition reminds us that even eggheads can be just as amusing as rock stars.

Here are some of the most demystifying life stories of 10 famous philosophers. Take some of the details here with a grain of salt though, the book is rather uncritically written, and many details lack sources. Other details are supposedly confirmed by sources long since lost.

This hasn’t stopped other philosophers, Nietzsche and Montaigne among them, from admiring the text and it shouldn't stop you.

Socrates is held in extremely high esteem as both a great philosopher and academia's great martyr. In Diogenes’ biography, we are reminded of Socrates the man. He tells us of how Socrates served in the army, was often found socializing downtown, and edited his friends’ plays—including Euripides, one of the big three ancient Greek tragedians.

Perhaps most amusingly, Diogenes tells us that Socrates loved to dance and thought that “such exercise helped to keep the body in good condition.” He also learned how to play the lyre as an old man, just like your crazy uncle during his mid-life crisis, and "he saw no absurdity in learning a new accomplishment."

In a showing of tremendous wit, when his wife told him he suffered unjustly, he asked her, “Would you have me suffer justly?" He also supposedly told a man that he would both regret both getting married and being single, perhaps explaining that last remark.

Plato’s most famous student, Aristotle would go on to touch every branch of human thought that existed at the time. He tutored Alexander the great, wrote an ethical theory that still has a punch, and founded his own academy in Athens.

The most interesting detail that Diogenes tells us about Aristotle is that he had a lisp or stutter. Given that many of Aristotle's works were given as lectures and recorded later, we must imagine that he either embraced it or worked around it. Diogenes gives us sources for this claim, but his book has long since become the authority on the matter. Accurate or not, Aristotle makes it on to many lists of celebrities with speech impediments.

Thales is the first philosopher in the western intellectual tradition and is most famous for his argument that water is the fundamental substance of the universe. He was also a noted mathematician, businessman, and sage.

Diogenes reminds us of his sharp wit. He records that when asked if there was a difference between life and death Thales responded that there was not. When he was then asked, “Why then, do you not die?” Thales retorted “Because it makes no difference.” On another occasion, he was asked which was older, nighttime or daytime. He replied, “Night is older, by one day.”

Plato (left) and his student Aristotle (Right) as imagined by Raphael.

Plato’s contribution to western thought is impossible to overstate. Philosopher Alfred Whitehead went so far as to suggest that all of European philosophy was “a series of footnotes to Plato.”

Diogenes tells us a great many things about him. His name, allegedly, was given to him by his wrestling coach on account of his "robust figure"—the name is derived from the Greek word platys, meaning 'broad'. Plato was skilled enough to participate in the Isthmian Games, which attracted athletes from all over Greece.

Platon was a common name, however, it would be strange for a family so wealthy and noble as Plato's not to name him for an immediate male relative. Diogenes tells us that Plato's real name was Aristocles, but this is impossible to confirm. Plato also called himself "Plato" later in his life, making the issue more difficult. In any case, we might know one of the greatest thinkers of all time by his stage name!

Solon was an Athenian aristocrat who gave the city a very effective code of laws. Chosen to lead the city by virtue of his wisdom, he lowered the requirements for public office to a level that made the later Athenian Democracy possible.

Diogenes writes that Athens had passed a law threatening to kill any man who even suggested a continuation of the long and bloody Salaminian war. Solon, knowing that Athens could win, feigned insanity and ran into the Agora with a garland on his head as though he were an Olympic champion. In his pretend delirium he recited a poem he had composed to rouse the public to war. It worked, and he became a war hero as a result. This bizarre piece of political theatre made his career, and the golden age of Athens, possible. Epicurus was a hedonistic philosopher who tried to come up with a new way of living that would maximize the pleasure gained over the course of a lifetime. His answer was to live a moderate, temperate life in a large house with your friends and to study philosophy. Overindulgence, long the stock and trade of the hedonists, was seen as the cause of suffering.

The only remaining works of Epicurus are to be found in this book, a few letters that he wrote are reproduced in full while an extensive bibliography of lost works is given. Diogenes agrees with other sources that he had and probably died of a severe kidney stone problem. However, the biography given here accounts that Epicurus had a happy death, as recounted in this poem.

Farewell, my friends; the truths I taught hold fast:
Thus Epicurus spake, and breathed his last.
He sat in a warm bath and neat wine quaffed,
And straightway found chill death in that same draught. Democritus was a thinker who is best remembered for arguing that the universe was made up of atoms. He and the other atomists had no empirical evidence for their claims but largely stumbled into modern science anyway.

Diogenes explains that he would go on trips to far-off lands to learn and socialize with friends. Upon his return, he would be so broke that he had to live off his brother, kind of like that one friend of yours who always posts pictures of their exotic travels but then can’t afford to go out when they get back. He later earned a fortune as a result of "foreseeing the future"—using his masterful grasp of science to predict weather and seasons.

The namesake for the Pythagorean theorem, Pythagoras was a mystic who saw mathematics everywhere he looked and managed a small cult. His followers had a myriad of strange rules; none of them could eat beans, the right shoe had to go on first, and long vows of silence were the norm.

He died as strangely as he lived. When he and his cult were attacked by a mob, Pythagoras fled. While modern scholars debate if he was killed or escaped to die in exile, Diogenes tells us he was killed. While running away from the mob, he came across a field of beans. Since he found them unsuitable to eat, he refused to run across them. The mob caught up and killed him.

Zeno of Elea is famous for inventing the dialectic method of argument and coming up with some famous paradoxes. He famously argued that movement is impossible.

Diogenes tells us that he was arrested for conspiracy against the tyrannical ruler of Elea. Zeno refused to give up his friends but did agree to whisper a secret to the tyrant that would be advantageous to him. When the tyrant allowed Zeno to approach his ear, the great philosopher “laid hold of it with his teeth and did not let go until stabbed to death.”

The author of The Lives of Eminent Philosophers himself shared a name with an eminent philosopher. Diogenes the Cynic was a thinker in the school of cynicism. He lived in a barrel, owned only a bowl, and once told Alexander the Great to move out of the way and stop blocking the sunlight. His life would inspire the Stoics, whose philosophy continues to inspire us today.

We learn in this book that he was once kidnapped by pirates and sold as a slave. As he stood on the auction block, he was asked his trade. He responded with, “I know how to govern men, does anybody need a master?” He was eagerly snatched up by a man who used him as a tutor for his children. Sources differ on if that man chose to free him immediately or not.