The philosophers of ancient Greece were among the greatest thinkers to ever grace humanity. Despite their importance, many people are familiar only with a few names of some of the relative latecomers to the Greek philosophical scene. To correct this, we have collected 7 Greek philosophers you probably haven’t heard of… and an introduction to why you ought to know them. 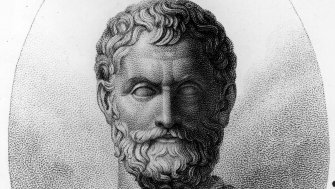 The first philosopher of the western canon, Thales is best remembered for his metaphysics which argued that everything originated from water and that water somehow constituted all other elements. He left no writings, and most of what we know of him is given to us by Aristotle, who may have misinterpreted his viewpoints.

Thales also devoted time to astronomy and was the first person to predict a solar eclipse accurately. He was a noted mathematician and is said to have measured the height of the great pyramid using the length of its shadow. He was credited with discovering magnetism in the west and used it as the basis of his theory of Panpsychism. To top it off, he invented futures contracts to strike it rich in the olive oil business.

While many of his inspirations and sources were mythic, Thales is said to have moved beyond myth and towards naturalistic explanations of the world. This entitles him to the title of the first philosopher. Isaac Asimov was so impressed with his prediction of an eclipse as to declare the event “The birth of science.” 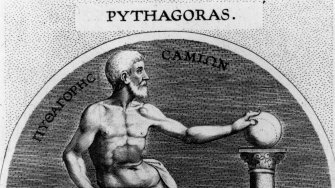 Pythagoras was a Greek mathematician, philosopher, and mystic. He is best known for the similarly named theorem, for which we have no proof that he was the author. He did most of his work in southern Italy and wrote nothing down. Leaving us, again, with the notes and stories of others to go on.

Pythagoras was a sage who founded a small religion of devoted followers. The eating of beans and plucking of garland was banned, among many other things. He preached a doctrine of reincarnation and was well known for his ideas on what happened to us after death. His school praised the contemplative life and the members studied mathematics and esoteric knowledge.

While he probably didn’t prove the theorem that bears his name, he is said to have known “the truth of the theorem” and made an enormous sacrifice to the gods in honor of the discovery. His mystical approach to numbers also lead him to discover the relationships between harmonic notes in music and attempt to describe the world regarding math; an activity science carries on to this day.

His influence is difficult to overstate. Plato borrowed several Pythagorean concepts in his metaphysics, and many Pythagoreans were respected thinkers for some time after his death. 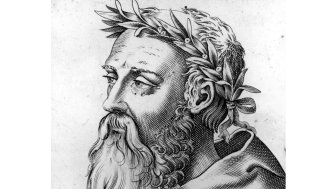 A philosopher active around 500 BCE on what is now the Turkish mainland, he was unlike many other philosophers on this list (and many from the Greek era). He wrote a book; fragments of which were quoted by later thinkers. This gives us a direct path to his thoughts.

Like many other pre-Socratics, he developed a cosmology. His cosmos has no beginning or end and is fundamentally made of fire. This fire can transform to become water, earth, and air. It is always in flux but keeps the elements in proportion. This constant change was the way of everything and was needed to keep the world stable. After all, if a river did not flow it would hardly be a river.

Going off of this, he argued that change was good and it was best to recognize that conflict and strife needn’t be avoided like most people think.

Plato alleged that Heraclitus denied the possibility of knowledge, as the world would change too fast to allow for lasting accurate information about it. However, Heraclitus did support the idea that attaining wisdom was possible, if difficult. He thought little of his fellow philosophers, saying they knew a great many things of little value.

He also had a rather odd way of going about philosophy. As he felt that wisdom should be earned, he wrote obscurely, so much so that his book was challenging to read, and ancient authors dubbed him The Riddler. 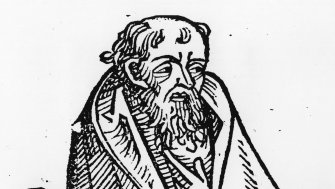 A philosopher who lived on the southwest coast of Italy, he was one of the most influential pre-Socratic thinkers. In stark contrast to Heraclitus, Parmenides argued that change was an illusion based on our faulty image of reality. He explained that nothing could be created or destroyed and everything was really “one being.” That is, all substances are part of the same larger whole.

As he thought that it was impossible to conceive of “nothingness” he also argued that empty space was an impossibility. This lead him to declare motion to be impossible, as any movement would require empty space to move into.

Parmenides’ work greatly influenced the philosophers after him, who tried to reconcile his arguments with the world as it seemed to be. Plato would later use him as a significant inspiration in building his cosmology. Plato would also steal his idea that reason alone had access to truth.

Not to be confused with Zeno of Citium, this Zeno was a pioneer of the reductio ad absurdum argument, and Aristotle credited him with co-inventing the dialectic method of philosophy. He is best remembered for his paradoxes. Although only nine of the dozens he wrote survive, they are as famous as they are troublesome.

His best-known paradox suggests that movement is impossible. He asks us to imagine a runner on a track. He notes that before the runner can run the whole length, they must first run the first half, then a quarter, then an eighth, and so on. However, as you can’t finish an infinite number of steps in a finite time, he argues that the runner cannot reach the end of the track and movement is impossible. A video introduction to the problem can be viewed here. 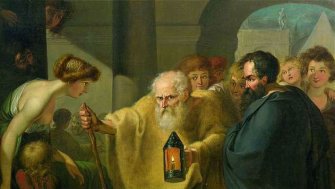 Diogenes Searching for an Honest Man by Johann Tischbein

One of the strangest philosophers ever to live. Diogenes was the epitome of the classical philosopher as a man who practiced what they taught. Diogenes founded the Cynical school of philosophy, a school dedicated to simple living and virtue.

Advocating a simple, disciplined, self-sufficient life, Diogenes lived in a large jar and owned nothing but a cloak and staff. He begged for food and avoided luxuries like the plague. He is said to have written a few (lost) essays but is better known for using actions to educate. He would walk down the street backward in an attempt to make people question why they walked forwards and begged from statues to show that he was not concerned with rejection. When he was presented with Zeno’s paradox demonstrating that movement was impossible, he is said to have stood up and walked away.

A famous story relates that Alexander the Great visited him in his pot before setting out to conquer the world. When Alexander asked what the cynic might want from the King of Greece, Diogenes asked him to get out of his sunlight. His teachings would ultimately inspire the Stoic school of philosophy long after the Cynics had vanished.

The founder of the Stoic school of philosophy, Zeno was heavily influenced by the Cynics. Initially a wealthy merchant, he became interested in philosophy during a trip to Athens and grew to be a highly regarded teacher. He wrote many books and essays, though none survive beyond the stray quotation elsewhere.

Stoicism is a philosophy dedicated to helping its students live the good life. The ancient Stoics believed the universe had a rational, perhaps divine, structure to it and held that while the laws of physics dictated what happened externally, we were still free to choose how we would react to it. They argued that a rational man should strive to live virtuously, and devoted a great deal of time to the question of ethics.

Zeno’s philosophy went on to inspire countless others, from Emperor Marcus Aurelius to Cubs coach Joe Maddon and continues to be a source of inspiration for many people today.

Related
The Present
Radical idea: Redraw the U.S. map as a nation of city-states
While cities drive national economic growth, their political geography means they cannot effectively deal with inequality, poverty, and other socioeconomic problems.
The Learning Curve
Why do high IQ people stagnate in their careers? Emotional intelligence
Research suggests that emotional intelligence is more vital for success than IQ.
The Present
Even in the age of AI, some problems are just too difficult for computers
Computers are growing more powerful and more capable, but everything has limits
The Future
How the metaverse will revolutionize K-12 and higher education
Imagine going on a tour through the human circulatory system as a tiny cell. That is just one example of education in the metaverse.
Starts With A Bang
Ask Ethan: What are white holes, and do they really exist?
In General Relativity, white holes are just as mathematically plausible as black holes. Black holes are real; what about white holes?
Up Next
Politics & Current Affairs
What the U.S. promises North Korea for giving up its nuclear weapons
The White House shares its vision of what the U.S. and its allies can offer to North Korea in exchange for denuclearization.