The happiness contradiction: Essential ways to find value in life from Epicurus

Are we going about being happy all wrong? One Greek philosopher thinks so, and he has advice for you. 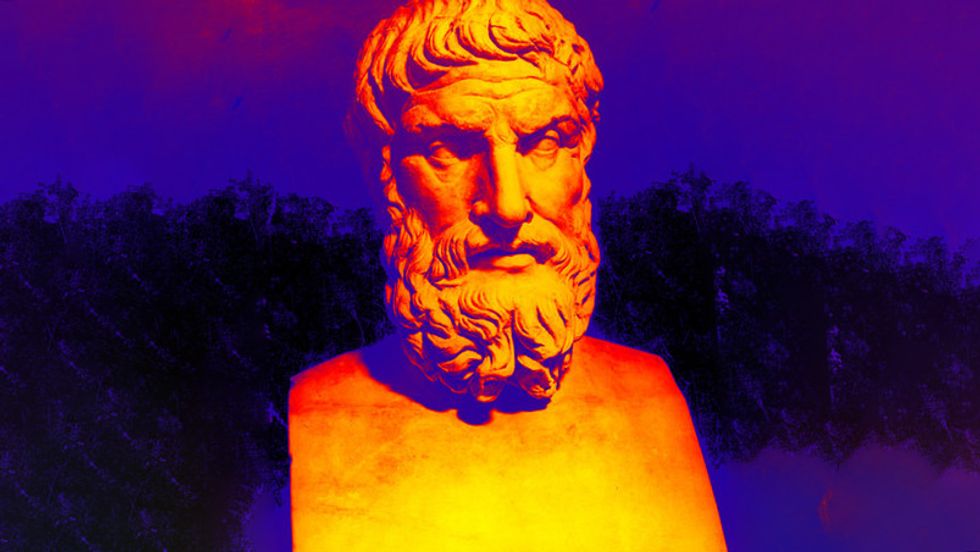 What makes you happy? Money, power, friends, booze, overeating, sex, drugs, or perhaps rock-and-roll? Most people worry about how to be happy, yet most people aren’t very good at acting on what they know will make them happy right now.

The problem of what makes us happy and how to act on that knowledge is one of the oldest problems in philosophy and one which has received the most attention. Ideas on how to be happy are some of the most applicable ideas philosophers have ever had.

Here, we have a philosopher who devoted his time to a radical method for happiness that can help you today.

Epicurus was a Hellenistic philosopher who focused on what makes us happy and how we can work to make ourselves happiest. He also has an extensive philosophy that covers topics such as physics, epistemology, the social contract, and religion which I encourage you to read up on. He and several of his friends moved into a large house that they called the "Garden”. They lived communally, although a hierarchy existed between members. They lived simply, devoted time to reflection and contemplation, and avoided civic life. In this commune, the Epicureans sought happiness. The sign on the door explained as much to passersby and the nature of the school was known around the Greek world. The experiment was mostly successful, and spin-off communes followed.

While not all of us can move into a large country house and live communally with our best friends, we can still learn from Epicurus and his movement. A few of his ideas are readily applicable even 2000 years later.

Epicurus was unwavering in his endorsement of friendship as a critical route to happiness. Cicero quotes him as saying that, ”of all the things which wisdom has contrived which contribute to a blessed life, none is more important, more fruitful, than friendship.”

While we all love our friends, we all tend to spend too little time with them. Epicurus’ communal house is a direct solution to this problem by making everybody’s friends available and accessible. He places friendship as a greater good than high-quality material items; saying that, “with whom a person eats is of greater importance than what is eaten.”

Epicurus, being a Greek philosopher, was very concerned with moderation. While he knew that it is enjoyable to overindulge, he also knew that too much luxury would make us look at our normal circumstances in despair. This reduces the happiness we have in the long run.

The solution to this is to have simple material goods on a regular and to not binge on the things we love. Of course, moderation must also be taken in moderation, and the occasional luxury is fine. The problem is when we have too much.

Epicurus himself ate little more than bread, olives, and cheese. He argued that this made any luxury foods equivalent to a great feast in terms of pleasure obtained from eating them.

You can't live on bread alone, but you may be happier if you try.

On the types of pleasure

Epicurus understood that there were many kinds of pleasures and pains. We can look at them in two simple ways, moving and static pleasures. He also promoted seeking mental pleasures over physical ones. Mental pleasures are things like the study of philosophy, reflection, and enjoying time with friends. These things don’t lead to the creation of later desires which can foul us up in our search for pleasure. We should also avoid civic engagement as it can lead to unsatisfiable desires.

Physical pleasures, like sex, wine, and luxury goods, can easily lead to the unsatisfiable desire for more and he advises that you avoid indulging in them too much.

Isn't this guy a hedonist? This doesn't sound very hedonistic.

Epicureanism is a hedonistic philosophy. This means that it is based on the idea that the most important thing in life is happiness or the avoidance of pain. While we often associate hedonism with vice, debauchery, and wickedness, Epicurus takes a more moderate approach.

His philosophy also has definite overtones of a eudemonic one, in which the goal of life is to live virtuously or well. He even argued that “It is impossible to live a pleasant life without living wisely and well and justly and it is impossible to live wisely and well and justly without living a pleasant life.” However, as Epicurus is explicitly setting the goal of life as happiness, it remains a hedonistic philosophy.

If it all worked so well, where are all the Epicureans?

His followers set up communes across the Mediterranean world. The early Christian Church helped put the movement down in the 3rd century and converted the buildings into monasteries. The damnation of the Epicureans lasted for centuries. Dante placed them prominently in the 6th circle of hell, that made for heretics, in the novel Inferno. While his philosophy has been rehabilitated, we often still consider his communes to be the original frat houses where the wine flowed freely.

Pictured: The cast of Animal House, which depicts people living together in a horribly unvirtuous way. Not pictured: Epicureans. (Credit to Universal Pictures)

While not of all us can move into a commune with our best friends right now, unless you want to try co-op housing, all of us can use the insights gained from one the most extensive attempts to change how we view happiness in human history. I’ll leave you with a quote from an early Epicurean on how to be happy in four steps. Use them as you will:

Don't worry about death;
What is good is easy to get,
What is terrible is easy to endure