The Netherlands has long been known for having one of the lowest crime rates in the world. It’s so low that, while the U.S. struggles with prison overcrowding, the Dutch have shut down dozens of prisons in recent years because there were no criminals to fill the cells.

It’s not necessarily good news for prison workers, as DutchNews wrote about prison closures in 2013:

“[The closures] led to a storm of protest from prison workers, [so] the government began ‘importing’ prisoners from Belgium and Norway to fill the gap and keep some prisons open.”

After several prisons closed in 2017, only 700 of the 2,000 displaced workers were placed in other law enforcement positions. It’s yet unclear what will happen to the officials working at the prisons set to shut down.

Why is the Dutch crime rate so low? 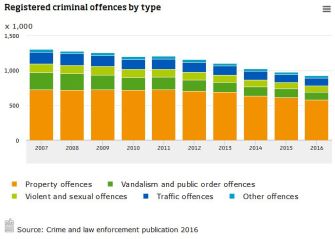 Incarceration practices could partly explain the low number: While the U.S. leads the world in incarceration rates at a figure of 716 per 100,000 citizens, the Netherlands only puts 69 per 100,000 people in prison. The Dutch also have a lower recidivism rate.

Studies on Dutch prisons have shown that shortening sentences and offering programs to convicts, both while incarcerated and after released, have shown positive impacts on recidivism rates and reintegration.

Other factors might also explain the country’s low crime: culture, a booming economy and a low unemployment rate, and strict gun laws.

However, a leaked Dutch police report from 2017 reveals that the low rates might not be accurate.

Senior Dutch officials wrote that scarce police resources and citizens’ lack of faith in policing could put them at ‘an insurmountable disadvantage’ by criminals who are acting with impunity.

Until more data and better research emerge, it remains an open question how closely the statistics reflect the reality of crime in the Netherlands.

NASA unveils 3 ways it will defend Earth from catastrophic asteroids

The chances of an asteroid large enough to be a threat to areas where human beings are concentrated are small. Still, it’s what’s known as a “high impact” result.