Invasive species: How the tegu lizard could invade the South

With the tegu’s successful occupation of Florida’s ecosystems, a new study predicts that this invasive species could potentially spread across the southern U.S. and into Mexico. But these voracious lizards are just another incident in our devastating history of invasive species. 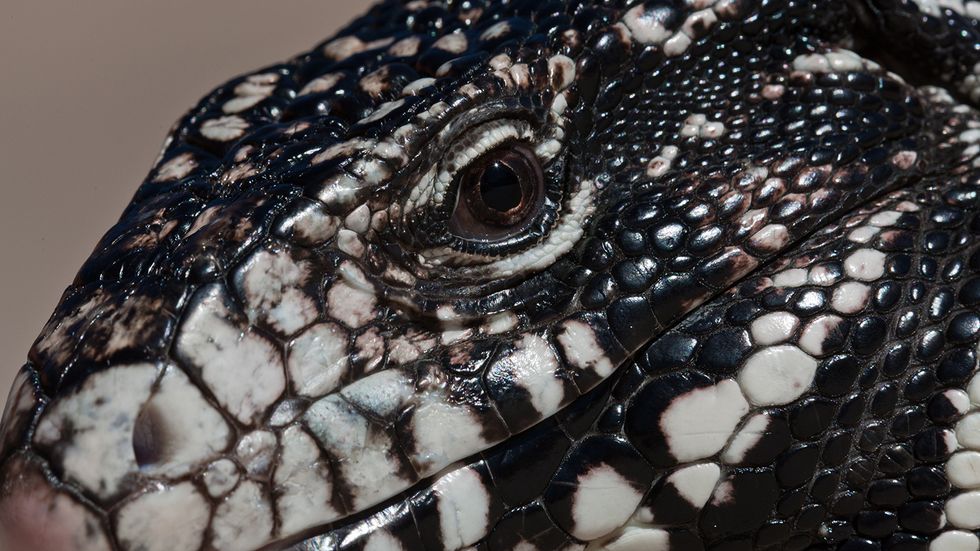 Take a moment to consider your perfect neighbor. I'm going to assume the image you conjured wasn't a 4-foot lizard with an insatiable appetite, giant claws, and a powerful tail it can ferociously whip at aggressors. Unfortunately, that's exactly the neighbor Floridians got.

Known as tegu, these giant South American lizards have recently moved into Florida's ecosystems, becoming one of the state's most aggressive invasive species. But they may not just be Florida's problem for long. A recent study published in Nature modeled the potential spread of the species and found that these lizards could extend their range far beyond the Sunshine State.

Like many other invasive species, tegus came to the United States as pets. As cited in the study, reptiles are incredibly popular on the international pet trade. Between 2000 and 2015, as many as 79,000 live tegus may have been imported into the U.S.—with an undetermined number breed in captivity.

Individually, exotic pets like tegus aren't much of a problem. However, they quickly become one when they either escape their enclosures or are released into the wild by owners unwilling to continue their care.

If enough are released, these animals may develop breeding populations in the region, escalating from nuisance to invasive species. Since invasive species are not native, the ecosystem provides no evolutionary checks and balances, leaving the invaders free to breed, feed, and spread aggressively.

In fact, the National Wildlife Federation estimates that “[a]pproximately 42 percent of threatened or endangered species are at risk due to invasive species."

This cycle is especially taxing on Florida's ecosystems, where reptiles can easily thrive thanks to a combination of subtropical climate, habitats similar to those they left, and relatively few native competitors. The state is also a central hub in the exotic pet trade.

To date, two tegus species have set up shop in Florida: Salvator merianae (the Argentine black and white tegu) and Tumpinambis teguixin sensu lato (the Colombian gold tegu). They pose a significant danger to many local species—such as alligators, turtles, and ground-nesting birds—as these long-clawed lizards can easily dig up nests to devour eggs.

“They are voracious, omnivorous predatory lizards that can live in a variety of habitats, but we can't know what is going to happen or how intense this invasion is going to become until the effects are upon us," Lee Fitzgerald, a professor at Texas A&M University and study co-author, told Reuters.

Not your dream neighbor: A male Argentine Black and White Tegu (Salvator merianae) mounts a female that has been dead for two days and attempts to mate. (Photo by Ivan Sazima via Wikimedia Commons)

Fitzgerald and his co-authors built species distribution models and projected those models onto North America to estimate the prospective range of the tegus. They found that much of Mexico and the southern United States would provide suitable habitat for at least one species of tegu.

The study also notes that there are “no known localities where tegus have been extirpated as a result of hunting" and that “[u]nder climate change scenarios in North America and the potential for niche shifts to occur, the invasion of tegu lizards could possibly be even more extensive than our models indicate."

Of course, tegu are not the only invasive reptiles to wreak havoc on Florida's delicate ecology. The state hosts a population of Burmese pythons that have turned the Everglades into their personal sex pad.

Like the tegu, this snake species was imported into the U.S. as a pet. After enough either escaped captivity or intentional release, they managed to establish a breeding population. Who knew caring for a 12-foot, 70-pound snake would be so difficult?

Also like the tegu, these pythons prey on native species that have no natural defenses against them, while simultaneously outcompeting local predators for resources. As cited by the United States Geological Survey, a 2012 study showed populations of raccoons, opossums, and bobcats have dropped 99.3, 98.9, and 87.5 percent respectively in the southernmost regions of Everglades National Park. Marsh rabbits, cottontail rabbits, and foxes have effectively disappeared from this region.

Tegu lizards: One link in a destructive chain

Florida may be a special case, but it hardly stands alone. In the United States, there are approximately 50,000 non-native species. Of those, roughly 4,300 are considered invasive. Every state plays host to invasive species and not just reptiles. Non-native birds, fish, mammals, and even plants have massively damaged local ecosystems.

English ivy, for example, was originally introduced to North America as an ornamental plant designed to elicit images of quaint English cottages. Today, it is a threat to biodiversity in the Pacific Northwest, where it grows uncontrollably, suppresses native vegetation, and destroys wildlife habitat.

But the onus doesn't just fall on negligent gardeners and pet owners. Invasive species have been introduced to the United States through a myriad of routes: from commerce (the nutria was bred for its fur) to land management (Asian carps were introduced to control weeds and parasites in aquaculture) to complete and total accidents (the emerald ash borer is believed to have immigrated on wooden packing materials from China).

Even Shakespeare enthusiasts shoulder some of the blame. In the 19th century, the American Acclimation Society deemed it necessary to introduce North America to every bird mentioned in the Bard's oeuvre. Its members released skylarks, nightingales, and song thrushes. None of them survived.

Then, in March 1890, a society member named Eugene Schifeffelin released 60 starlings into Central Park. Today, there are millions of the poxy birds devouring crops, spreading disease, and competing with native species across the continent.

Invasion of the birdy snatchers

But let's not look to the follies of others and shake our heads with too much haughty superiority. If you are American, there's a good chance your household is one of the 30.4 percent harboring the country's most pernicious invasive species. I am, of course, talking about the house cat.

Cats were introduced to North America by European colonialists, and thanks to our patronage, these cuddly killers have enjoyed an evolutionary free ride. Today, there are more than 100 million feral and outdoor felines roaming our parks, neighborhoods, and backyards, killing more than a billion birds annually. When other taxa are considered, the average outdoor cat kills around two animals per week, for a yearly kill count of more than a hundred critters.

Consider the story of Tibbles the cat. Tibbles was brought to Stephens Island, New Zealand, by her owner, a local lighthouse keeper. She was the first mammalian predator to ever live on the island, so local bird species had not evolved the necessary defenses. The Stephen Island's wren didn't even fly because it had no need to. Within a year or two, Tibbles and her offspring would hunt the Stephen Island's wren to extinction and push several other species to the brink.

While the Tibbles case is extreme, the level of predation brought on by cats is ruinous. The problem is so bad that the Western Governors' Association listed feral cats as one of its top 50 invasive species concerns. With the addition of climate change and habitat loss, many bird species are being decimated at unsustainable levels.

If you're a dog lover, this may seem the perfect opportunity to lord it over your furball-loving friend, but hold off. While the canine isn't considered invasive to North America, the species can still massively impact biodiversity and impede recovery efforts.

In India, dogs reportedly attack 80 species, of which 31 are threatened and four critically endangered. Another study found that “[d]ogs have caused around 10 extinctions and threaten another 156 species" and lists canines as one of four species with the most pervasive ecological impacts—the others being cats, rats, and pigs.

Pushing back the invasive tide

Want to help mitigate the impact of invasive species in your region? The U.S. Fish & Wildlife Service has an excellent guide for how to prevent introducing invasive species and what to do if you recognize one. For information more specific to your area, you can contact your local USFWS office or visit its website.

The one thing all invasive species have in common is that they were introduced to their new homes by human activity. Given the vast reach of globalization—not to mention mishaps, accidents, chance occurrences, and blatant disregard—invasive species will no doubt continue to be a problem well into the future. However, with these simple steps, a little knowledge, and some forethought, we may be able to prevent at least some invasions on the potential scale of the tegu.