Alien species winding up where they don’t belong is getting to be a worryingly ho-hum occurrence, from Asian kudzu creeping its way across the eastern U.S., to lion fish eating their way through Caribbean coral reefs, to zebra and quagga mussels from eastern European waters throwing Great Lakes ecosystems out of whack. But this invader is different: It bites.

Florida is now home to three breeding populations of West African Nile monitors. Just to be clear, these are not cute little things. Nile monitors are the largest lizards in Africa, and now the biggest ones in Florida. These flesh-eaters grow to be as long as 2 meters (roughly six feet). They’re aggressive predators who eat mammals—wait, that’s us—birds, reptiles, amphibians, fish and eggs. 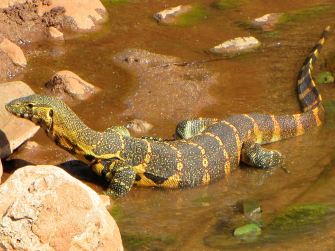 It’s believed the monitors were first shipped to the U.S. as young pets and then released by their owners. Three shipments arrived at three Florida locations: Cape Coral, Homestead, and West Palm Beach. Since monitors love waterfront property just as much as the humans who purchase that pricey real estate, these three places are now the sites for their breeding colonies.

And boy, do they breed, laying up to 60 eggs in a single clutch. The largest colony, Cape Coral, has over 1,000 monitors. 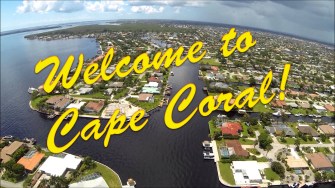 This why a Google search finds articles like, “Nile monitor lizards invaded Florida and they’re winning the battle” and “WHAT SHOULD WE DO ABOUT THE GIANT LIZARDS?”

The lessons for us all seem clear. Well, first, watch out if you’ll be walking in Florida. (The state is actually an evasive-species magnet.) 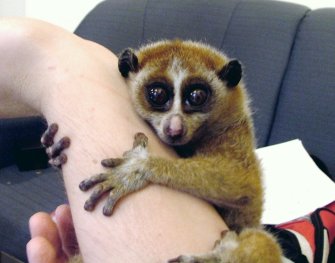 They can wreak havoc on native species when they escape. It’s bad enough when alien organisms are imported unknowingly, but acting on an exotic-species infatuation is just a disaster waiting to happen. Especially when that cute little thing grows up and goes looking for something, or someone, to eat.

Related
Starts With A Bang
The galaxy cluster that broke modified gravity
19 years ago, the Bullet Cluster provided an empirical proof for dark matter. Even today, modified gravity still can’t explain it.
Neuropsych
Psychology studies that go viral are likelier to be bogus
A new 20-year analysis of over 14,000 psychology studies finds that a study’s media coverage is negatively linked to its replicability.
The Future
How a device transmits radio waves with almost no power
Apart from the energy needed to flip the switch, no other energy is needed to transmit the information.
The Present
Radical idea: Redraw the U.S. map as a nation of city-states
While cities drive national economic growth, their political geography means they cannot effectively deal with inequality, poverty, and other socioeconomic problems.
The Learning Curve
Why do high IQ people stagnate in their careers? Emotional intelligence
Research suggests that emotional intelligence is more vital for success than IQ.
Up Next
Surprising Science
One Easy Way to Be a Scientist? Look at These Adorable Pics of Baby Penguins
Penguins in Antarctica are changing their migration patterns. Scientists aren’t sure why — and they need your help to figure it out. And you can do it from the comfort of your home.