Vegan blogs are rejoicing over Burger King’s decision to sell an “Impossible Whopper,” a soy-based take on the burger chain’s classic offering. While Impossible Foods has been around since 2011, this recent news has almost resulted in shortages in restaurants trying to keep up with demand.

Distribution might be an issue in the coming months. Yet before meat abstainers get too excited, we should be informed whether or not these new Whoppers are cooked on the same grill as their regular offerings.

While the Impossible Burger is soy- and -potato protein based, the lab-grown meat movement is also picking up speed (though not as fast as some would hope). These headlines signal a positive step forward in our relationship to other species (and the planet).

As musician and activist Moby recently pointed out on Real Time with Bill Maher, animal agriculture is a leading cause of climate change, yet is not being discussed on a national stage by presidential candidates. The laser focus on carbon emissions and energy companies is missing an essential piece of the puzzle.

There is another solution to climate and ethical problems associated with industrial meat agriculture — not a vegan solution, nor does it have a major burger chain behind it. It is not a replacement for the advancements in plant-based offerings and “clean” meat research, but it should be considered as an accompanying offering: crickets.

If you squirm at the suggestion, you’re not alone. Still, the edible insect market is growing: $55 million in 2017, the industry is expected to grow over 43 percent by 2024. The reason you squirmed (if you did) is more cultural than nutritional. Insects are regularly on the menu across the planet. Health experts have been nudging Americans in this direction for some time. A 2013 UN report urged us to consider integrating some of the 1,900 edible insect species into our diet due to their high nutrient and protein profile.

The psychological hurdle is the biggest obstacle for Americans. Eating insects is something “poor” and “third world” people do, goes the sentiment, even though more than two billion people regularly eat insects. The fact that we don’t is similar to why we no longer squat while defecating and why we don elaborate footwear: toilets and padded sneakers are more status symbols than biological necessities.

If you consider all we do for status over health, you’ll find the so-called “first world” mentality unsustainable. Our intestinal tract works best when squatting; our feet function better with space and natural curves rather being than stuffed into “foot coffins.” Both of these anatomical curiosities are rooted in the mindset of affluence: I can afford a toilet and shoes, unlike those primitives. What appears to be an everyday reality is the result of a long disdain of poverty, even as the real impoverishment is how we treat our bodies.

The same is true of insects. We romanticize “the hunt” as part of our genetic heritage, and indeed, capturing large animals provided protein-rich meals for tribes. Most hunter-gatherer meals, however, were provided for not by the champion male, but by women gathering roots, tubers, vegetables, and yes, insects for daily sustenance. As Colin Tudge has written, agriculture didn’t magically appear; it co-existed with the hunt for tens of thousands of years (if not longer). We have long been growing and hunting for our food.

Thus, if you’re walking around Thailand’s famous street markets, you’ll come across plenty of crickets, grasshoppers, silkworms, and more — just make sure that scorpion is thoroughly cooked before chowing down. 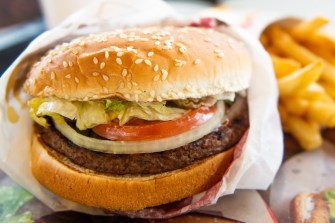 Of course, insects do not provide nearly the same caloric bang for the buck as mammals and fowl. Industrial-grade chicken arrives in your cart for roughly $3 a pound; crickets, $15. That is changing as more companies, such as Austin-based Aketta, experiment with means to bring down costs and bulk up nutrients.

Growing beef requires a lot more land, water, and feed than insects (and pretty much everything else) while also producing inordinate amounts of greenhouse gases. Aketta’s cricket burger recipe is filled with plant-based ingredients to tamp down the insecty taste (for the squeamish). While I have yet to try this particular burger, I’m a fan of cricket flour protein bars, which taste like most other flour-based supplemental meals.

At the moment the movement is slightly faddish, yet so is an Impossible Whopper. That will change as we become accustomed to the shifting culture around us.

The distance between sustainability and health need not be as vast as now. Growing beef and pork for an expanding population is not sustainable for the land and sky, similar to how overfishing is quickly depleting our oceans (and leaving us with too many jellyfish). Nothing is impossible if we change our mindset toward it.

Edible insects are not third world or primitive; they’re smart nutrition. Those concerned with ethical issues will be happy to know that their nervous systems are nowhere near as advanced as the animals we’re accustomed to seeing on the menu.

With more farmers involved, production costs will decrease while the benefits to land and water will be apparent. Perhaps many will even discover that insects don’t taste nearly as poorly as perceived. Just add a little salt and plenty of chili.

Let’s hope that squid don’t evolve lungs and legs, or humanity might be in real trouble.
13.8

Does life on Earth have a purpose?

The answer is both disappointing and exciting.
Life

The zebras were originally part of a newspaper tycoon’s private zoo. Now they roam the San Simeon grasslands, growing in numbers.

A neuroscientist explains how to master your focus.
▸
7 min
—
with
Amishi Jha
Life

Turning off a gene called “Myc” has a surprising effect in male fruit flies: They start courting other males.
Up Next
The Present

Over half of Americans are stressed because of medical bills

Anxiety does not help other medical conditions, adding trouble on top of trouble.