Lab-Grown "Clean Meat" is Almost Here. Will You Eat It? 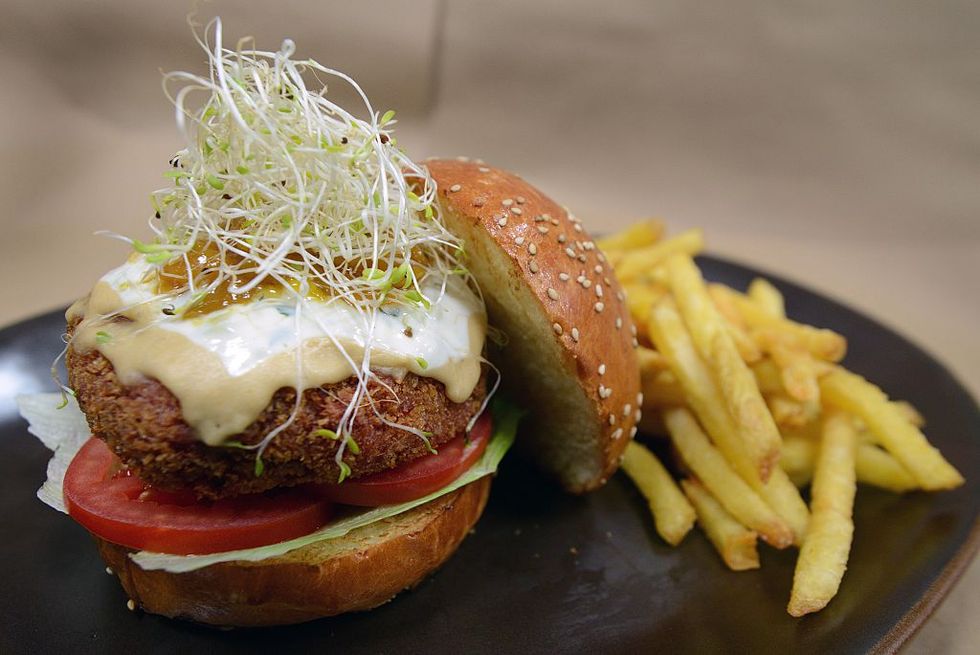 Vegetarian options are finding their way into the culinary revolution of Peru, with hopes to take the big leap into the world's, after the World Health Organization linked the consumption of processed meats with cancer. (Cris Bouroncle/AFP/Getty Images)

Would you consume artificial frozen water produced by a machine? In 1805 this wasn’t a crazy question. Frederic Tudor wondered why people couldn’t enjoy cold beverages whenever they wanted. Within three decades he became known as the “Ice King,” with humble origins shipping eighty tons of Northeastern winter ice to Martinique in hopes that Caribbean residents would jump all over it.

They didn’t. Frederic’s brother and partner, William, pulled out of the deal. Undeterred, Frederic tried again the following winter. By 1810 he was pulling a profit. In 1847 Tudor shipped 52,000 tons of ice to 28 US cities. He died in 1864 a rich man, which was good timing, as by the turn of the century everyone in America owned an icebox.

Not that “artificial ice” was immediately glamorous. Critics labelled it “unnatural.” Slicing chunks of ice from lakes was the way to go, they said. Never mind the pollutants contained in the water. Machines, by contrast, freeze water that’s been boiled and purified, making it a safer choice. As Paul Shapiro, VP of Policy Engagement for the Humane Society of the United States, recently told me,

Natural ice is actually less safe than artificial life because natural ice had pollutants; it had horse manure from the horses who were dragging the ice out of these lakes. So you ended up having a situation where people shifted over to artificial ice. One hundred plus years later we all have artificial ice makers in our homes. We call them freezers and we hardly think there’s anything unnatural about it at all.

Shapiro isn’t really concerned about ice. He compares this cold evolution to a more recent technological development in his forthcoming book, Clean Meat: How Growing Meat Without Animals Will Revolutionize Dinner and the World.

Cue the critics calling it “unnatural.”

And critics are plentiful, which is odd given the strange chemistry passing for food on our supermarket shelves. American cabinets are filled with numerous products containing no actual food ingredients, yet because it arrives in a bright package marked “all natural” we don’t think twice about it. The consequences of this chemistry is known through the many metabolic and cardiovascular diseases, as well as psychological disorders like anxiety and depression, the modern American diet promotes.

Shapiro’s book is a wake-up call informing Americans that not only will lab-grown, cultured meat be healthier—unnecessary antibiotic usage on animals living in crowded, contaminated quarters has made the quality of much of our meat questionable at best—it will also tremendously reduce animal suffering.

Perception is key. While Shapiro cites a 2014 Pew poll stating only 20 percent of Americans would try “clean meat”—which would account for $40 billion annually, no small change—he tells me about a more recent poll stating that number is now closer to two-thirds. Shapiro continues:

Eighty percent of Americans believe that food containing DNA ought to be labeled by mandatory labeling laws. Of course you and I know that virtually everything we’ve ever eaten has DNA in it. But when people hear about the application of science to food they sometimes get a little bit nervous, though that nervousness does not usually translate into actual consumer behavior.

Which is true, given that from my home office window in Los Angeles I see crowded parking lots at McDonald’s and Jack in the Box, both of which contain numerous suspect ingredients consumers pay no attention to. If they actually saw where that meat was sourced they’d likely make better choices, but since those conditions are hidden we pretend they don’t exist.

Shapiro’s book opens the veil behind emerging technologies that will soon be producing consumer-ready cultured meats, dairy products, and leather. Shapiro, a vegan since 1993, has even tasted burgers and foie gras created by these methods—in the name of science. The taste and, importantly, texture are there or close. Prices are dropping as more players enter the industry, whose companies are backed by a variety of billionaires, including Sergey Brin (who funded a $325,000 five-ounce burger patty produced from stem cells from a cow’s shoulder), Bill Gates, and Richard Branson, the latter two who have invested heavily in San Francisco-based Memphis Meats.

Shapiro is well aware of current limitations. Expense is one, though that entry point is shifting as we approach a $10 burger. Choice is another. Ground meat has been the focus, but we’re much further away from a rib eye and loin chop. A big one is comfort. Food is as emotional to people as religion; ensuring this technology is safe and satisfying will take time.

Most importantly to many is ethics. Humans kill an unsustainable number of animals every year, most of which are imprisoned for their entire lives while eating anything but a natural diet—and if their diet is unnatural, how do we think that affects the meat they provide us? While Shapiro is promoting a vegan agenda, he believes the real market for clean meat is carnivores looking to make better decisions about their diets and the planet.

This movement relies on education, which includes understanding how we’ve arrived at where we are now. Israeli historian Yuval Noah Harari, an animal rights advocate and vegan activist, writes the foreword to Clean Meat. In his first book, Sapiens, Harari speculates that Homo sapiens drove Neanderthals, Denisovans, and other human species clear off the planet. Language and communication skills helped, but our thirst for violence was the motivating factor. That violence manifested in a craving for meat, especially once we understood how fire made the plentiful protein sources more nutritious, tastier, and easier to digest.

It’s easy to romanticize over a peaceful human origins story. Yet it’s not true. We are the most destructive animal in the history of the planet. We’ve clawed and killed our way to the top. What the many inventors and investors featured in Clean Meat remind us of is that we’re not bound to history. We can be better. We can make ethical choices that not only sustain us but sustain the planet and its bountiful diversity. Lab-grown, cultured meat, dairy, and leather is an essential step in that direction.

While we might not understand exactly where that step will lead, Shapiro believes clean meat offers a better foot forward than any we’re currently taking:

We don’t know what some unintended consequences might be but it’s hard to imagine that there will be anything like the tremendous downsides to continuing to raise and slaughter tens of billions of animals for food globally.

One day clean meat will be seem as natural as freezer ice. The sooner, the better.