A quarter-million years of evolution can't be wrong. 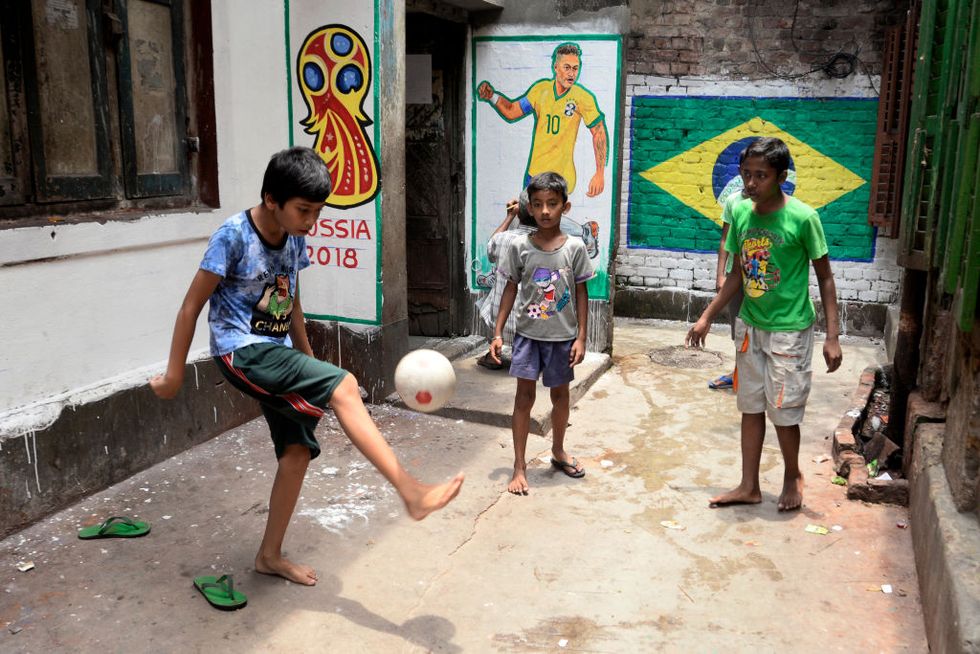 Indian boys play football or soccer barefoot in a narrow lane of Kolkata in front of Brazil flag and player Neymar (Jr.) painted on wall on the occasion of FIFA World Cup 2018. (Photo by Saikat Paul/Pacific Press/LightRocket via Getty Images)

Are things getting better or worse? That’s the topic of a recent New Yorker article, in which Joshua Rothman investigates divergent theories on the state of the world. Technology, the breakthrough that’s perpetually supposed to make life more unified and easier, consistently appears to do the opposite. As Rothman writes, when the news is on the television in the other room, you have to make effort to listen; when it vibrates in your pocket you’re on high alert for the next tragedy every moment.

Yet things are getting better, in many ways, from healthcare and lifespan to finance and housing. Still, a small majority of Americans believe the country was better in 1967 than in 2017. Romanticizing history is a survival mechanism of sorts; our memories exploit circumstances to tilt in our favor. (In cases of depression and anxiety, we remember things as worse.) When favoring the past, people often think of it as simpler, purer in some regard, even though we’re (relatively) richer and healthier today.

There are certain facets of the past worth investigating, however. For 15 years I’ve been a minimalist shoe advocate. I spend my days barefoot, while all my footwear is zero-drop. I never understood how a quarter-million years of development as bipeds would lead to stuffing our appendages into what biomechanist Katy Bowman calls “foot coffins.”

While heels and other accessories are centuries old, the padded heel so popular for sport is less than 50. As the journalist and avid runner Christopher McDougall points out, the heeled sports shoe was the result of a marketing initiative by Nike to sell more shoes.

Boy from the Himba tribe walking barefoot on the harsh ground of the Kunene region. (Photo by Jorge Fernández/LightRocket via Getty Images)

As a fitness instructor, I meet many people with foot problems. Their problems are often exacerbated when barefoot. Yet they also spend no time barefoot. Instead of addressing their mechanical problems, podiatrists are content with creating further barriers between feet and earth: more cushioning, more restriction, “lifts”—I wore one under my right heel for seven years following a femur break and two ankle breaks on the same leg. Leaving that behind led to my fascination with minimalism, given the havoc that the lift waged on my lower back and neck.

I’m not the only one fascinated by how footwear changes mechanics. A new study, published in the journal, Frontiers in Pediatrics, discovered that being barefoot as a child positively impacts motor movements. Children that always wear shoes (are shod) displayed worse jumping and balancing skills compared to those who are perpetually barefoot.

The study included 810 school children from 22 primary and secondary schools in two countries. The shod children were from urban regions in Northern Germany, while the barefoot kids live across rural Western Cape South Africa. As they write regarding previous studies:

Interestingly, the one skill shod children displayed was in sprinting. But, as the researchers comment, the conditions, such as weather and surface area, could not be controlled for. It is certainly easier to sprint across a track than on a dirt road, regardless of footwear. The German children were all tested indoors, which likely influenced the results. As they write:

Professor Astrid Zech, who led the study from her post at the University of Jena, Germany, notes that this revelation should be considered by physical education teachers—and parents—around the world:

In her book, Movement Matters, Katy Bowman compares our use of movement to our ingestion of supplements: we ingest small bits of nutrients believing they'll give us cover from a horrible diet. The same holds for our movement diet. We think of shoes as necessary because that’s how they’ve been marketed. (There are socio-economic reasons as well.) While there are benefits to covering our feet, wearing heeled and padded shoes is akin to foot binding: a crippling ritual for an aesthetic result that does not honor the evolution of our motor patterns. She continues, "Natural movements are only perceived as archaic by the group of people who have outsourced them."

Our connection to our environment is of primary importance. As the New Yorker article implies, the constant attentional deficit we experience due to always staring at our devices does great damage to our nervous systems. We believe things are worse because we’re always being told it is. Instead of staring at the world around us, we're hooked into the screen in our palms.

The same can be said for our relationship to the physical earth beneath our feet. Sever that connection and we suffer the consequences. The necessity of shoes is a social convention, not a biomechanical reality. Children are suffering from that perception. Perceive differently, and everything changes.