John Ratey is an associate clinical professor of psychiatry at Harvard Medical School, as well as the author of numerous article and books, including Spark: The Revolutionary New Science of Exercise and the Brain. In his clinical work, Dr. Ratey focuses on attentional disorders. He collaborates with institutions around the world, helping children and adults move better and with more variety while educating audiences about the impact exercise has on both physical and mental health.

I recently chatted with Dr. Ratey about the necessity of training both your brain and body (listen to the full conversation here). Next week I’ll publish the second half of the interview, where we focus on diet’s role in physical and mental health, as well as his recent work in addiction recovery. Here we discuss the junction of physical and mental health, barefoot running, why schools need to implement PE as part of their educational curriculum, and the role of play in fitness.

Derek: Spark was such an influential book in terms of discussing the necessity of brain health for physical fitness and vice versa. The insights are a profound rebuttal to Cartesian dualism. What initially made you interested in this connection?

John: I grew up being an athlete. Back then, athletes were not necessarily fit. I played all sports all the time, so I was pretty fit, but no one “worked out.” We had to be forced on our tennis team to run a mile.

When I finally got to medical school, I was interested in psychiatric issues. There was an article about a hospital in Norway offering patients the option of taking one of our brand new amazing antidepressants or an exercise program, and they were finding the same benefits. It intuitively made sense to me. When I got overwhelmed with medical school and stopped exercising, I noticed the difference.

Then I came to Boston in the midst of Bill Rodgers and the marathon explosion. I started running like everybody else did. Then Candace Pert discovered endorphins. That became a thing: “I want to go raise my endorphins because I’m feeling a little crappy, so I better go work out.”

I was just starting to teach and work at my own practice. I was very interested in ADHD. Because I was also interested in aggression, a lot of people with aggression have a history of having ADHD or ADD or dyslexia. I met a professor, who was an early marathoner, that twisted his ankle and hurt his knee, so he couldn’t run anymore. At the same time, his productivity dropped. I saw him as a patient and treated him with medicine, but also helped him when he got back to running after his knee problem healed. It turns out that he didn’t need the medicine except for every now and then.

That really got me interested in two things. One was attention deficit disorder, especially in adults. It began a journey into that whole area, but at the same time I always paid attention to the seemingly magical effect of exercise on attention. A part of my lectures always discuss using exercise to improve mood, attention, and aggression.

Derek: Your work also introduced me to one of the most fascinating books I’ve ever read, i of the vortex, by Rodolfo Llinas. You quote him in Spark: “That which we call thinking is the evolutionary internalization of movement.” I’ve been a fitness instructor at Equinox for 15 years. I teach a lot of different modalities and diversity of movement is extremely important. I wonder, given our history as a species that relied so heavily on diverse movements, why do you think that people have lost touch with that sense of diversity and even play in their physical activities?

John: It’s a very good question. What we have is a coevolution of our environment that made it less part of our lives, thanks to everything the digital world has brought us to cars helping us use less exertion in everything that we do. This has led to this sort of sedentary culture that we have and it’s literally killing us. It’s a mismatch on what we’re supposed to be doing according to our genes.

I was just in Abu Dhabi working with an educational group. It was clear that these kids aren’t moving at all. They don’t have to and they don’t want to. And you see the problems with the lack of motivation, the lack of interest.

This is especially sad news when it comes to variety of movement. That’s so important to all of us: to keep every part of our body moving. The focus now is on balance training. That’s huge, because we’re not moving in various different environments or encountering different challenges. Our balance goes away, especially as we age, and so we see this as a huge problem now.

I see a huge problem with learning disabled kids, who have ADD, dyslexia, and autism. They really have trouble physically balancing as well as mentally balancing. By training the one you can have an effect on the other, so back to Llinas: the internalization of that balance can help you balance your cognitive and emotional life.

Derek: When I teach yoga classes, one of the most challenging parts of the body that I find students have trouble with is their feet and ankles. When Nike introduced the padded running shoe, it really did a disservice to our anatomy. People have such little range of motion and everything starts in their feet. Daniel Lieberman writes about that as well.

John: When you take comfort in the incredible soles that you get with shoes, it throws everything off. We were born to run; Chris McDougall’s book is a testament to that. He was running with the wild men of Mexico, who would run forever barefoot. When you’re running with a heel strike, you put an incredible amount of torque and pressure on your knees, ankles, and hips. By correcting that with barefoot running shoes, you’re forcing yourself to land on the front part of your foot. This helps to correct or avoid those damages because we’re made to move that way and yet we don’t do it. 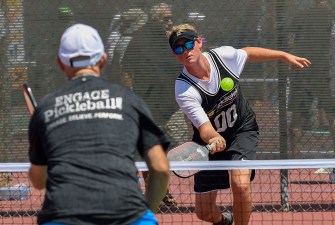 Derek: In Spark, you write about Zero Hour PE and the effects of the before-school elective program on children’s academic performance. I wonder if you have any thoughts on why school administrators often cut programs like PE and the Arts to focus on STEM curriculum. Isn’t that missing half the point of what an education should be?

John: Absolutely. That’s what I spend my time around the world lecturing about. A large number of Chinese educators are beginning to turn this around. They traditionally had an emphasis on physical fitness amongst their students. Then it all became testing, testing, testing. Now they’re more aware of the fact that fit students are better students: more receptive, more cooperative, they have better attention and better capacity as they actually learn quicker and test better.

So there you’re seeing a resurgence in the amount of time spent in PE and the emphasis for the individual student. But here where we’re doing just the opposite. There are lots of reasons for it. The big one is that there are so many different demands on the educational system that teachers want more time with kids. They want as much time as possible, as they believe it is the best way to get students to do well on test scores—that they need to achieve by having them sit in their seat and have the teacher force it into them. They’re very guarded in giving up any time for such things as the Arts and physical education. Again, it misses the point. We should be about making kids fitter and not just allowing educated executives that see PE as something for the athletes making those decisions.

Derek: You touch upon an important aspect in your work, which is play. While I love gym culture, so many people treat is as a very serious, controlled activity. There really is no play on machines.

John: Adults are missing that like crazy. I just learned about pickleball, which is the fastest growing sport in America. It’s a dumb sport, but it’s fun and it’s play; it’s in some ways one of the easiest sports you could do, but people move and they laugh and they have fun and they get better and then they get competitive. We’re missing that kind of playful movement interaction, as well as the social aspect. We all need to remember how important play was in our lives. Now, especially with our devices, play becomes virtual, which is a huge problem.

Derek: That’s exactly where I was going to go next. I work in blockchain; I grew up the son of a computer programmer. I’ve worked with computers for decades. Yet when I walk into the gym, I look down the row of cardio machines and people are texting or looking at their phone. I want to explain to them that they’re not learning whatever they’re looking at on their phone and they’re also not working out optimally.

John: Well, it’s hard not to see it as the beginning of the end [laughs]. There isn’t anything better than having the world at your fingertips. It’s wonderful, but it’s so addicting. Parents are starting to have a little bit of awareness. My grandkids aren’t screen-addicted…yet. But they want to be. Parents are always on their phone, so it becomes difficult to say, “Don’t do as I do, do as I say.”

Derek: I believe that if we look down the road a few generations, we’re going to see a big uptick in diseases of dementia because of this reliance of offloading memory to our devices.

John: Oh yeah. I used to be really good with directions. Now, even when I’m going someplace that I know the way and have been that way all the time, I sometimes have my GPS on for whatever reason. That part of my brain is not being accessed; it’s being assisted. I don’t need to be augmented there, yet I’m doing it. I worry about it, but I worry more about the lack of physical activity that really leads to all the reasons why we get demented.

Tags
addictionbraindepressionhealthmental healthneuroscience
In this article
addictionbraindepressionhealthmental healthneuroscience
Related
Neuropsych
Memory and the benefits of forgetting
Forgetfulness isn’t always a “glitch” in our memories; it can be a tool to help us make sense of the present and plan for the future.
Neuropsych
Asthma drug brings back “lost” memories
In a study involving mice, scientists used two different techniques — one optogenetic and one pharmacologic — to recover “lost” memories.
Life
Our antidepressant drugs are affecting animals and ecosystems
A toxicologist explains the impacts of antidepressants on fish — and no, they’re not getting any happier.
Thinking
Visual thinking: How to understand the inner lives of animals
Humans are good visual thinkers, too, but we tend to privilege verbal thinking.
The neuroscience of loving music
Humans are musical animals four million years in the making, explained by music expert Michael Spitzer.
▸
8 min
—
with
Michael Spitzer
Up Next
Hard Science
Bank of England to honor Alan Turing on £50 note
“It is almost impossible to put into words the difference that Alan Turing made to society.”