The idea of making food from little more than thin air— carbon dioxide, actually—is not a new one. NASA was tinkering with the idea in the 1960s as a means of growing food on future long missions. In recent years, as we’ve come to understand that Earth’s resources—land and rainforests chief among them—are limited, interest in the concept has been renewed, with NASA doing new research and two companies racing to market with CO2-derived food products. 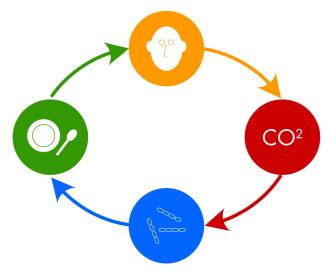 The basic mechanism for deriving food from CO2 involves a fairly simple closed-loop system that executes a process over and over in a cyclical manner, producing edible matter along the way. In space, astronauts produce carbon dioxide when they breathe, which is then captured by microbes, which then convert it into a carbon-rich material. The astronauts eat the material, breathe out more CO2, and on and on. On Earth, the CO2 is captured from the atmosphere. 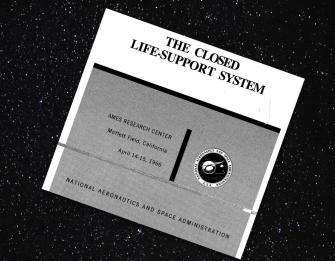 NASA’s investigation into using CO2 for food production began with a 1966 report written by R. B. Jagow and R. S. Thomas and published by Ames Research Center. The nine-chapter report was called “The Closed Life-Support System.” Each chapter contained a proposal for growing food on long missions.

Chapter 8, written by J. F. Foster and J. H. Litchfield of the Battelle Memorial Institute in Columbus, Ohio, proposed a system that utilized a hydrogen-fixing bacteria, Hydrogenomonas—NASA had been experimenting with the bacteria for several years at that point—and recycled CO2 in a compact, low-power, closed-loop system. The system would be able to produce edible cell matter in way that “should then be possible to maintain continuous cultures at high efficiencies for very long periods of time.”

At the time, extended missions that would benefit from such a system were off in the future.

In 2019, and with its eye toward upcoming Mars missions, NASA returned to the idea, sponsoring the CO2 Conversion Challenge, “seeking novel ways to convert carbon dioxide into useful compounds.” Phase 1 of the contest invited proposals for processes that could “convert carbon dioxide into glucose in order to eventually create sugar-based fuel, food, medicines, adhesives and other products.”

In May 2109, NASA announced the winners of Phase 1. The space agency concluded acceptance of Phase 2 entries on December 4, 2020. 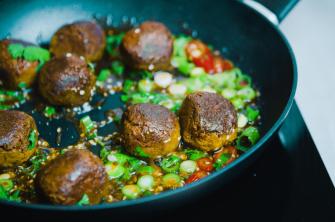 We’ve written previously about Solar Foods, a company backed by the Finnish government who recently invested €4.3 million to help complete the company’s €8.6 million commercialization of their nutrient-rich CO2-based protein powder, Solein. The company anticipates Solein will provide protein to some 400 million meals by 2025, and has so far developed 20 different food products from it.

Another player, Air Protein, is based in California’s Bay Area and is also bringing to market their own CO2 protein named after the company. The company describes it as a “nutrient-rich protein with the same amino acid profile as an animal protein and packed with crucial B vitamins, which are often deficient in a vegan diet.”

Although Air Protein is actually flour—like Solein—the company is positioning Air Protein as offering “the first air-based meat,” while Solein was announced first, and there’s no public timetable yet for the arrival of Air Protein products on store shelves. In any event, non-animal “meats” are a hot market these days with the success of Beyond Burger and Impossible Foods cruelty-free meat substitutes. 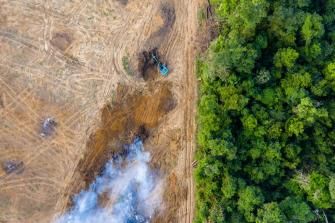 Though Air Protein’s promotional materials emphasize meat substitutes that will be derived from their flour, a TED Talk by company co-founder Lisa Dyson reveals another Air Protein product that could arguably have an even greater impact by potentially eliminating the need for palm oil and the deforestation it requires — their CO2 process can produce oils.

The company has already created a citrus-like oil that can be used for fragrances, flavoring, as a biodegradable cleaner, and “even as a jet fuel.” Perhaps more excitingly, the company has made another oil that’s similar to palm oil. Since palm trees are the crop most responsible for the decimation of the world’s rain forests, an environmentally benign replacement for it would be a very big deal. Dyson also notes that their oils could substitute morally problematic coconut oil, whose harvesting has lately been reported to often involve the abuse of macaque monkeys.

We know we have too much of the stuff, so finding a way of utilizing at least some CO2 to create foods and other products that reduce the need for destructive commercial practices is a solid win for humankind. Harkening back to its NASA origins, Dyson notes in her talk that Earth, too, is sort of a self-contained spaceship, albeit a big one. Finding new ways to productively reuse what it has to offer clearly benefits us all.

Research shows how temperature can be used to manipulate circadian rhythms.
Strange Maps

A forensics expert explains what’s involved with documenting human rights violations during conflicts, from Afghanistan to Ukraine.
The Present

It is wrong to think that these three statements contradict each other. We need to see that they are all true to see that a better world is possible.
The Present

As technology advances, the use of laser weapons in space becomes more likely.
Up Next
Starts With A Bang

Is The Universe Actually A Fractal?

This image shows a slice of the matter distribution in the Universe as simulated by the GiggleZ complement to the WiggleZ survey. There are many cosmic structures that seem to […]