Health care is at the top of the ticket in the rush toward the 2020 presidential election. Details between “Medicare for all” and public and private options will be on full display at a time when even so-called conventional wisdom is up for debate: the general consensus that employer-based health care options are best is not looking like a strong argument, as a recent survey shows.

The survey, a joint effort between the Kaiser Family Foundation and the Los Angeles Times, notes that over half (54 percent) of respondents claim that someone in their family suffers from chronic conditions, such as hypertension, diabetes, or asthma. A lifetime of medication and monitoring is ensured, putting serious strain on families. Job-based health plans have almost quadrupled in price over the last dozen years.

This isn’t the only recent research to confirm struggles with America’s health care system. A large-scale study by the American Cancer Society confirms an inconvenient fact: more than 137 million people in the United States are struggling to pay their medical bills.

The financial risk of cancer is well known: 42 percent of cancer patients lose their life savings within two years of treatment. This new research, conducted by four doctors in the Surveillance and Health Services Research Program at the ACA, looks at high out-of-pocket (OOP) spending for overall medical care—not just in the treatment of cancer—with a particular emphasis on employment-aged citizens, 18-64.

Why Medical Bills In The US Are So Expensive

Why Medical Bills In The US Are So Expensive

Financial toxicity due to OOP costs have received much attention in recent years. One conceptual framework, proposed by Nandita Khera in 2014, features a four-level grading criteria for expressing financial problems: 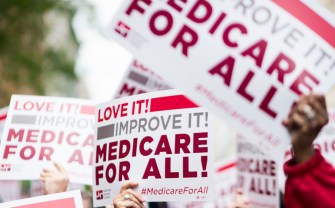 Members of National Nurses United union members wave “Medicare for All” signs during a rally in front of the Pharmaceutical Research and Manufacturers of America in Washington calling for “Medicare for All” on Monday, April 29, 2019. (Photo By Bill Clark/CQ Roll Call)

One-third of older Americans reported hardship in at least one of those three domains compared to 56 percent in the employment-aged group. Overall, women were hit hardest. Uninsured respondents reported problems in multiple domains (52.8 percent), followed by those with public insurance (26.5 percent) and finally, private coverage (23.2 percent). Over three-fourths of uninsured respondents are struggling in at least one domain.

As noted, over half of respondents experience hardship in one domain, while over a quarter report issues in two domains. Sadly, the authors write, this problem is only getting worse.

“With increasing prevalence of multiple chronic conditions; higher patient cost-sharing; and higher costs of healthcare; the risk of hardship will likely increase in the future. Thus, development and evaluation of the comparative effectiveness and cost-effectiveness of strategies to minimize medical financial hardship will be important.”

Climate change and health care remain top issues in the upcoming election cycle. While candidates make their plea and pundits choose sides, the rest of the population is suffering. By the time November, 2020 rolls around, more citizens will be bankrupted (and more needlessly dead) due to the politics of health care.

That is the most tragic realization of all: we could have done something about this epidemic yet partisan paralysis has stopped us. There is nothing caring about such a system.

U.S. states vary radically in terms of electricity generation. Vermont is the cleanest, while Delaware is the dirtiest.
Up Next
Neuropsych

The surprising benefits of cooking as a life skill

There's few domains in life that aren't improved by learning how to cook.