There’s been a lot of talk about brain-to-computer interfaces (BCIs) lately. We’ve written about how they can help locked-in patients communicate, and recently Elon Musk announced his BCI company, Neuralink. There are even brain-to-brain interfaces being developed, and scientists have demonstrated how BCIs can allow people with paralysis to manipulate physical objects using their thoughts. Now a study of three rhesus-macaque amputees published in nature communications has revealed a couple of exciting things: The amputees successfully learned how to operate robotic arms with their minds — the first time such control by amputees of any kind has been demonstrated — and the monkeys’ brains actually developed new primary motor cortical (MI) neuron connections to adapt to their new natural/prosthetic pair of arms.

Before we go any further: The missing limbs of the three monkeys in this research were not amputated for the study. They all had injuries when they were young that required amputation.

The study was conducted by neuroscientists at the University of Chicago who implanted multi-electrode arrays in the monkeys’ brains to track neural activity. A limb is controlled by its opposite, or contralateral, brain hemisphere, and so two of the monkeys had implants contralateral to the missing limb, and one monkey had an ipsilateral array on the side of the missing limb, but controlling the opposite arm. The scientists observed the monkeys’ neural activity and used statistical modeling to predict the connections between neurons. Monkeys Z and N were the contralateral pair, and Monkey K was the ipsilateral subject. 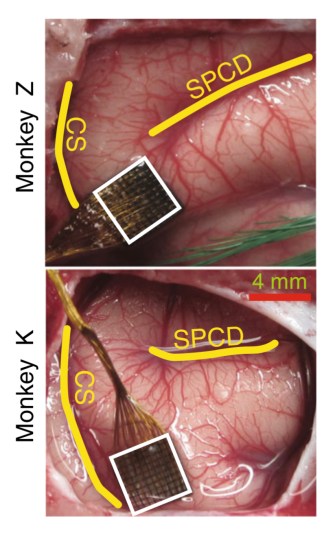 Arrays in contralateral Z and ipsilateral K. “SPCD’ is the superior precentral dimple and “CS” is the central sulcus(U CHICAGO MEDICINE)

The trio was taught how to move a robotic arm and grasp a ball with it, with juice as the reward for each success. It took about a month of training to achieve mastery, but Z, N, and K proved it could be done.

Senior author of the study Nicho Hatsopoulos tells At the Forefront, “That’s the novel aspect to this study, seeing that chronic, long-term amputees can learn to control a robotic limb. But what was also interesting was the brain’s plasticity over long-term exposure, and seeing what happened to the connectivity of the network as they learned to control the device.”

The monkeys’ motor-neural connections were analyzed before training, early in training, and again after training. Not surprisingly, the researchers found that connections were initially sparse in the missing limbs’ contralateral hemispheres, most likely as the result of lack of use. (Z and K had lost their limbs when they were two months old, 10 and 4 years before the experiment, respectively. K’s amputation occurred at age 5, 9 years ago.) The initial connections in K’s ipsilateral hemisphere were dense, presumably from lots of use controlling the existing limb.

During training, the scientists saw two things taking place in the monkeys’ neural connections. In the contralateral hemisphere that was used for controlling the robot arm, connections became more dense and more robust. And something weird happened in the ipsilateral hemisphere: The previous dense connections dissolved, only to be replaced by new ones. Lead scientist Karthikeyan Balasubramanian says, “That means connections were shedding off as the animal was trying to learn a new task, because there is already a network controlling some other behavior. But after a few days it started rebuilding into a new network that can control both the intact limb and the neuroprosthetic.” It’s as if the prior structure was optimized for a single limb doing all the work, and the new one was better for using the existing arm as one of a pair of limbs — one of which was the robot arm — together.

The study is excellent news for human amputees. First, it appears that functioning artificial limbs controlled by the brain are absolutely within the realm of possibility. Second, once outfitted with such a limb, it seems the brain’s remarkable elasticity will embrace the prosthetic, much as if it had always been there.

Related
Neuropsych
Psychology studies that go viral are likelier to be bogus
A new 20-year analysis of over 14,000 psychology studies finds that a study’s media coverage is negatively linked to its replicability.
The Future
How a device transmits radio waves with almost no power
Apart from the energy needed to flip the switch, no other energy is needed to transmit the information.
The Present
Radical idea: Redraw the U.S. map as a nation of city-states
While cities drive national economic growth, their political geography means they cannot effectively deal with inequality, poverty, and other socioeconomic problems.
The Learning Curve
Why do high IQ people stagnate in their careers? Emotional intelligence
Research suggests that emotional intelligence is more vital for success than IQ.
The Present
Even in the age of AI, some problems are just too difficult for computers
Computers are growing more powerful and more capable, but everything has limits
Up Next
The Future
NASA’s A.I. Discovers a Second Solar System With 8 Planets, Just Like Ours
A machine learning algorithm has shown it can discover planets from weak signals overlooked in the Kepler spacecraft’s database.