Mark Zuckerberg recently reiterated that brain-to-brain interfacing is our species future. Today, scientists can have participants move things on a screen with their mind and signal to one another across vast distances. It may someday have therapeutic uses for ADHD, give us sense experiences not akin to our species, and even allow advertisers to invade our minds. 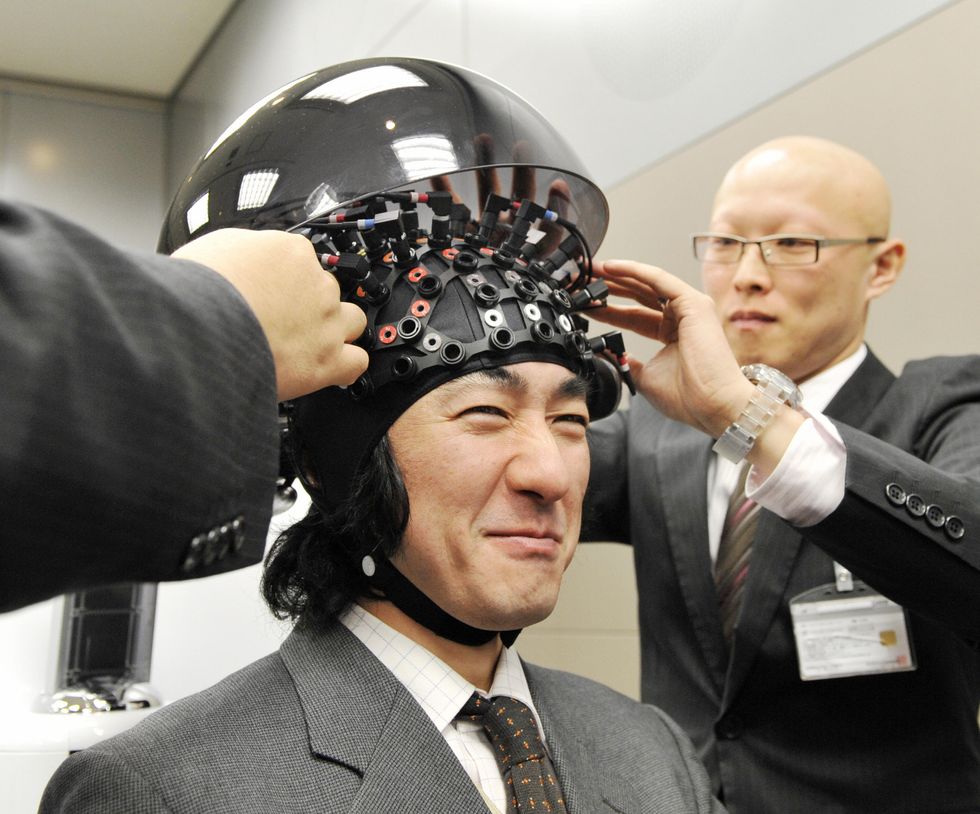 100,000 viewers recently tuned in to see Mark Zuckerberg and Jerry Seinfeld chew the fat on the first ever Q&A session on Facebook Live. At one point, Zuckerberg reiterated that the future of the internet and consequently humanity, lie in technology that gives us telepathic powers. In his view, we would be able to record our own experiences in real time, and share thoughts and feelings directly with friends and loved ones. He called it the “future of communication.” So how close are we to brain-to-brain interfacing?

Previous research in harnessing brain waves sound like pages out of a science fiction novel. Consider a monkey who could control a computer with its thoughts, and one human telepathically controlling the movements of another. Other experiments used “organic computers” with the brains of several chimps or rats all linked together.

Neuroscientists at the University of Washington, Seattle recently announced electronically-assisted telepathy. In this experiment, two colleagues sat a mile apart using only the internet relaying their brainwaves. They played a game of 20 questions. This was made possible by the work of Miguel Nicolelis, a Brazilian researchers at Duke University. In the late 90’s he began experimenting with the brain’s electrical output, painstakingly checking each individual neuron. He and colleagues soon discovered which neurons did what. For instance, 48 specific neurons fire simultaneously to allow a rat to move. When they turned to monkeys, Nicolelis and his team were able to identify 100 neurons firing in unison. What they did next was astounding.

They connected a probe to a monkey’s brain, and had it move a dot around a screen with a joystick. When it got the dot in the center, it would receive a reward, some juice. By observing this movement, neuroscientists could recognize brain patterns. Now the joystick was taken away, the monkey was hooked up to another device, and soon it could move the dot around with its thoughts, just by picturing it in its head. This was the first experiment of its kind, the first time a primate moved something with its thoughts alone.

Model of the experiment.

The breakthrough inspired neuroscientists to begin what is known today as brain-to-brain interfacing (BBI). So far, results in humans have been limited. This is also due mostly to ethical rules which disallow the connecting of probes in the brains of living humans. Still, Chantel Prat and Andrea Stocco at the University of Washington rose to the challenge. First, they wanted to see if they could send a signal from one brain that would initiate a physical response in another.

They recruited two researchers who were positioned in different rooms across campus. Each was fitted with an electroencephalography (EEG) cap which measures brainwaves. One colleague in one room started playing a video game with his mind. To shoot in the game, he would simply imagine pressing the fire button. Another researcher was given noise-cancelling headphones. His head was fitted with a transcranial magnetic stimulation (TMS) coil. This device emits focused electrical signals. It was placed on the part of the brain that controls one’s finger. When the first researcher fired with his brain, the second one’s finger would pull the trigger. One man was controlling the other.

One problem with the telepathy model according to Prat, is that the person receiving telepathic signals can’t tell whether it is coming from their own brain or that of another. “Whatever shape (future brain-to-brain communication) takes is going to be very different than listening to someone's thoughts in your head," he said. Still, this research is already bearing fruit.

Nicolelis’s work has led to brain-to-machine interfaces. Today, the paralyzed are able to walk using brain signals sent to robotic prosthetics, and can even regain their sense of touch. Meanwhile, Prat thinks there may be applications for learning. You could tell when someone was focusing in class for instance, while another was daydreaming, using advanced EEG models. You could also hook up the brain of an ADHD student to that of someone who doesn’t have it, to see if you could in this way ease the symptoms of the condition. This is theoretical of course. Another proposed possibility is hooking up human brains to those of animals, and being able to experience sensations not relative to our species, like a dog’s sense of smell, or a dolphin’s sonar.

Though Prat doesn’t believe downloading and broadcasting thoughts is possible, others are not so sure. One Harvard study had one person in India wearing an EEG/TMS setup linked to another through the internet in France. The participant in India thought the words “ciao” and “hola” which were emailed to and picked up by the other. These signals were perceived as flashes of light which could be deciphered into words. Adding onto this, University of Washington Researchers decided to play a game of 20 questions.

Here, two people were connected via computer. One wore an EEG cap and the other a TMS coil. The TMS wearer was shown a picture of an animal on the computer screen, say a shark. Then they would be asked a question like, “Can it fly?” The EEG wearer would think the word “yes” or “no.” These thoughts traveled to the other over the internet. The TMS wearer would see a phosphene or flash of light in their eyes if the answer was yes, signaling that they were on the right track. This team scored a 72% accuracy rate, compared to the 18% accuracy of the control group. So what’s the takeaway? Brain-to-brain communication may be possible. But flashes of light are a far cry from sending speech or images to someone else’s head.

What human computer interface actually looks like. It is BBI when someone’s on the other end.

And say we do get there. Then what? Will advertisers be able to infiltrate (defile?) the last sacred space, that which lies between our ears? And what will be the result? Would we become more empathetic to the suffering of others, or more tolerant of it, having glutted on others intense emotions so often as to become desensitized to it?

Perhaps the intensity would even lead to a new form of addiction. If internet porn is killing productivity and affecting human relationships, imagine being inside the head of someone having an orgasm, or a whole crowd of them, without being present in the physical sense. A string of such experiences on a daily basis could have a generation forego the hardship of getting an education or working, and the difficulty of real human relationships, for that which is easy, yet intensely satisfying. Anyone who has been in a relationship knows that sometimes we wish our partner could read our thoughts. But commercializing on such technology is another matter entirely.