Humans in the Western world for a long time thought that Earth was the center of the universe. At one point, it was heresy not to think so. After the heliocentric universe was adopted, we felt smaller and less self-important. But we’d also gained something, new knowledge and a new avenue in which to explore the heavens. That was a paradigm shift in our understanding and now, it’s happening again.

We know now today that our planet isn’t special in certain other respects. In terms of inhabiting a “goldilocks zone” which could harbor life, Earth is not the only planet that’s neither too hot nor too cold. Liquid water and an atmosphere are no longer considered luxuries, either. In short, given this and the mathematical possibilities, many scientists believe it’s only a matter of time before we find life somewhere else. After all, hundreds of billions of stars inhabit our galaxy alone, which assumes hundreds of planets the right size within the habitable zone. And that’s a very conservative assessment.

Kepler is a space telescope designed to scour a section of the Milky Way in order to find exoplanets. An exoplanet is one found beyond our solar system. Before Kepler, astronomers were wondering if planets themselves were common or rare. Launched in 2009, Kepler has discovered over 2,500 confirmed exoplanets, and 30 in the habitable zone—each less than twice the size of Earth. Today, there are currently 3,500 confirmed exoplanets total. 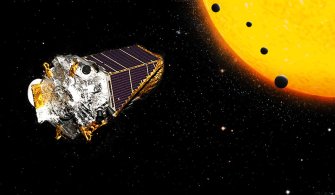 The problem with Kepler is that it collected reams of reams of data, so much that no one could go through it all. Scientists chose to select those candidates with strong signals. Weak signals could be a treasure trove for A.I., however. So Christopher Shallue, a senior software engineer at Google Brain, and Andrew Vanderburg, a NASA Sagan Postdoctoral Fellow at the University of Texas at Austin, decided to have a crack at it. They employed machine learning, a fascinating new A.I. field that’s making some incredible headway. Their A.I. utilizes artificial “neural networks” modeled after our brain, albeit a far simpler version.

In a recent press conference, Shallue and Vanderburg explained how they trained their A.I. program to identify exoplanets from the Kepler database. According to the scientists, you train neural networks not by programming them but by exposing them to what you want them to recognize. For instance, if you want it to identify puppies and kittens, you show it plenty of pictures of them. After a while, it’ll get good at recognizing them.

Except, here they didn’t show it pets. Instead, they taught it to read minuscule light changes in the brightness of a star which occur when a planet transits or passes in front of it. After enough practice, they let it loose on light recordings captured by Kepler. What the A.I. discovered is that our solar system isn’t as unique as we thought. Instead of being the only eight-planet one, we’re now one of two (that we know of).

NASA introduced the Kepler 90 system in an historic announcement on December 14, 2017. “The Kepler-90 star system is like a mini version of our solar system. You have small planets inside and big planets outside, but everything is scrunched in much closer,” said Andrew Vanderburg, astronomer and NASA Sagan Postdoctoral Fellow at The University of Texas, Austin.

Experts speculate that an eight-planet solar system may in fact be common. It also seems that having a solar system where the smaller planets are in the front and the larger ones in the back, may not be so rare. Hopefully, future explorations can help to understand exactly how planetary systems form, as the discovery of new exoplanets has disrupted many of the theories astronomers developed from studying our solar system. 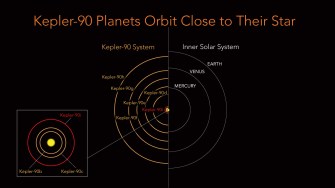 The discovery began with just one planet. The A.I. found a weak transit signal from a planet known as Kepler-90i that had been previously missed. It’s in a planetary system called Kepler-90, located in the constellation Draco, some 2,545 light years from Earth. The new planet is extremely hot, with an average surface temperature of 800 degrees Fahrenheit—about as hot as mercury. Its year is incredibly short. It orbits its star once every 14.4 days. This system probably isn’t the best candidate for life. What’s game changing besides our solar system slipping from its unique place, is the ability to use machine learning to detect previously unrecognized exoplanets. The program also located a 6th planet in the newly discovered TRAPPIST system.

A.I. had been used previously to scour the Kepler database. But these findings show that artificial neural networks are particularly adept at the task. The idea was first posited by Google’s Shallue, who while studying astronomy in his free time, heard about how the discipline was drowning in data. “Machine learning really shines in situations where there is so much data that humans can’t search it for themselves,” he said.

Paul Hertz is the director of NASA’s Astrophysics Division in Washington. He said, “Just as we expected, there are exciting discoveries lurking in our archived Kepler data, waiting for the right tool or technology to unearth them.” He added, “This finding shows that our data will be a treasure trove available to innovative researchers for years to come.” Shallue and Vanderburg consider this a successful proof of concept study. In it, explained in a paper to be published in The Astronomical Journal, the A.I. scanned 670 stars. In the future, they plan to have it study all 150,000 stars Kepler has identified.

Today, we still consider our planet special, as it’s the only known place to harbor life. One wonders for how long it’ll hold this lofty location. So far, the A.I. used can’t determine whether an exoplanet is a good candidate for life. But with technology and computing power moving so fast, that ability shouldn’t be too far away.

To see NASA’s video of this discovery, click here:

Tags
a.i.dataeight planetsexoplanetKepler spacecraftmachine learningnasaNASA announcementneural networkssolar system
In this article
a.i.dataeight planetsexoplanetKepler spacecraftmachine learningnasaNASA announcementneural networkssolar system
Related
Videos
Is reality real? These neuroscientists don’t think so.
Reality is more distorted than we think.
▸
with
Big Think
The Future
The term ‘AI’ overpromises: Here’s how to make it work for humans instead
Is there actually anything deserving of the term AI?
Hard Science
Cracking a mystery about Vesta, our solar system’s second largest asteroid
How did the troughs form?
Hard Science
Earth’s first puff of oxygen may be thanks to volcanoes
Scientists track down a puzzling early burst of oxygen on Earth.
The Future
Why is it so hard to give AI common sense?
There’s no telling whether machine-learned common sense is five years away, or 50.
Up Next
Personal Growth
Fatih Akin – This Blood-Drenched Earth – Think Again – a Big Think Podcast #129
Fatih Akin has first-hand experience of strong cultural cross-winds. Ethnically Turkish and raised in Germany, he has made many films dealing with sudden dislocation and how people respond to it.