How many planets are in our Solar System? You may think there’s an obvious answer you learned in kindergarten, but the number has fluctuated between 8 and 9, depending on whether you accept Pluto as being large enough for a planet. But there’s another mysterious planet that may be lurking at the edge of the Solar System – the so-called “Planet Nine”. All we know about it is through inference, arrived at by judging the effects this potential planet may be having on its surroundings. Now, for the first time, scientists measured the motion of a massive exoplanet, in a different solar system, that may be exhibiting behavior similar to that of the hypothesized Planet Nine.

The exoplanet HD106906 b is 336 light-year away from Earth. With the mass of as much as 11 Jupiters, it orbits a double star system. Scientists first discovered it in 2013 but have now been able to get much better information about its orbit thanks to NASA’s Hubble Space Telescope. In fact, Hubble has collected 14 years worth of precise data about the exoplanet, allowing for a wealth of new insight.

The exoplanet is located very far from its host stars, 730 times as far as it is from the Earth to the Sun. While its slow 15,000-year-long orbit would ordinarily not allow for very conclusive observation in just 14 years, the Hubble team found that its orbit is extreme, both very inclined and elongated, staying on the outside of a debris disc surrounding the twin stars.

Meiji Nguyen of the University of California, Berkeley, who led the study, commented on how unusual the exoplanet’s orbit is:

“To highlight why this is weird, we can just look at our own Solar System and see that all of the planets lie roughly in the same plane,” shared Nguyen. “It would be bizarre if, say, Jupiter just happened to be inclined 30 degrees relative to the plane that every other planet orbits in. This raises all sorts of questions about how HD 106906 b ended up so far out on such an inclined orbit.”

How did this planet develop such an orbit? The scientists think it likely formed much closer to the host stars, but the drag from the system’s gas disc might have affected its orbit. This could have pushed it closer to the twin stars, whose gravitational force then threw it out into an eccentric orbit, nearly all the way into interstellar space. As the Hubble team’s press release explains, a passing star then possibly corrected the exoplanet’s orbit and stopped it from leaving the home system altogether.

This explanation is similar to what scientists predict could have pushed the potential Planet Nine to the edges of our Solar System, past the Kuiper belt. Jupiter might have affected its orbit, kicking it out from the inner Solar System. Planet Nine could have kept going past Pluto but a passing star possibly stopped it by altering its orbit.

Paul Kalas of the University of California, Berkeley, a member of the Hubble team, commented that analyzing what happened to exoplanet HD106906 b is like investigating our own past.

“It’s as if we have a time machine for our own Solar System going back 4.6 billion years to see what may have happened when our young Solar System was dynamically active and everything was being jostled around and rearranged,” elaborated Kalas. 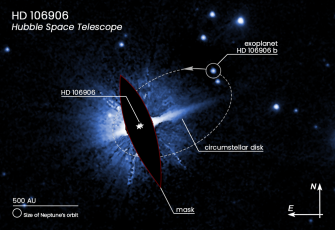 Of course, none of this means we actually found Planet Nine, if it even exists. Evidence for its corporeality includes the strange behavior of small space bodies past Neptune, whose inexplicable orbits might be the result of being affected by the gravitational pull of an unseen planet.

Further investigations into the formation and debris system of the exoplanet HD106906 b will be carried out by the James Webb Space Telescope, slated to launch in October 2021. It promises to shed more like on the exoplanet’s unusual system and, by extension, on our own mystery Planet Nine.

Check out the team’s paper, published in The Astronomical Journal. 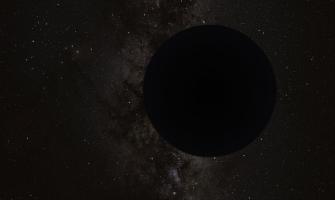 Tags
cosmosexoplanetshubble space telescopeplanet ninespacetelescope
In this article
cosmosexoplanetshubble space telescopeplanet ninespacetelescope
Related
Life
“I went to space and discovered an enormous lie”
What astronaut Ron Garan saw in space changed his life forever – here’s what it taught him.
▸
8 min
—
with
Ron Garan
Videos
The true story behind Carl Sagan’s cult classic, Contact
Do aliens dream about meeting us, too?
▸
with
Jill Tarter
Videos
NASA astronaut explains humanity’s trajectory to Mars
The first human that isn’t an Earthling could be in our lifetime.
▸
5 min
—
with
Robert Curbeam
How Earth’s 23.4° tilt makes life beautiful
Rituals come as much from religion as they do from the way Earth spins around the Sun.
▸
4 min
—
with
Sasha Sagan
Videos
Michio Kaku: “We need a second planet”
Humans won’t survive if we stay on Earth. Michio Kaku explains.
▸
7 min
—
with
Michio Kaku
Up Next
The Present
Manmade objects now weigh more than all living things on Earth
Humans churn out about 30 gigatons (30,000,000,000 tons) of material every year.