Elon Musk wants to create a brain-machine interface that helps humans “achieve a kind of symbiosis with artificial intelligence.”

Neuralink — Musk’s secretive company that’s developing a brain-machine interface — gave a presentation Tuesday that outlined its first steps toward this building this technology, which it’s been working on for the past two years. The main reveal? Flexible “threads” that record neuron activity, and a machine that inserts these threads into the brain.

The goal is to build an interface that enables someone’s brain to control a smartphone or computer, and to make this process as safe and routine as Lasik surgery. Currently, Neuralink has only experimented on animals. In these experiments, the company used a surgical robot to embed into a rat brain a tiny probe with about 3,100 electrodes on some 100 flexible wires or “threads” — each of which is significantly smaller than a human hair.

This device can record the activity of neurons, which could help scientists learn more about the functions of the brain, specifically in the realm of disease and degenerative disorders. The device was also designed to stimulate brain cells, though a white paper released by the company said it has not yet done so. 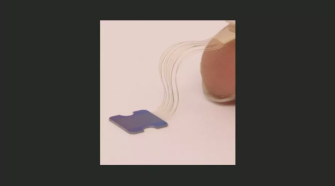 “There’s an incredible amount we can do to solve brain disorders, damage, and this will occur quite slowly,” Musk said in the presentation Tuesday. “This will be a slow process where we’ll gradually increase the issues that we solve until ultimately we can do a full brain-machine interface.”

One of the most surprising revelations came when Musk said this device has been tested on at least one monkey, who was able to control a computer with its brain. (Musk didn’t provide further details.) Neuralink’s experiments involve embedding a probe into the animal’s brain through invasive surgery with a sewing machine-like robot that drills holes into the skull. Once embedded, the company connects to the probe through USB. 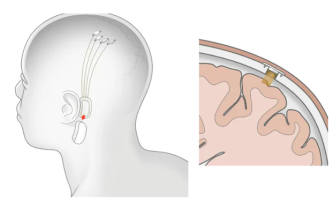 Eventually, Neuralink hopes to use laser beams to embed the device, which would use a wireless interface, “so you have no wires poking out of your head,” Musk said. “That’s very important.”

This wireless product — called the N1 sensor — would consist of four sensors implanted in the brain: three in motor areas and one in a somatosensory area, an area of the brain responsible for sensations inside of or on the body’s surface. In its early stages, the N1 sensor would enable users to control smartphones with their brain, sort of like “learning to touch type [to] play the piano,” Musk said.

Neuralink’s device isn’t the first example of a brain-machine interface, but the company claims its technology is “state of the art,” mainly because it uses smaller and more flexible “threads” for neural recording, instead of rigid electrodes made from metal or semiconductors. The company suggests its approach would be safer and cause less inflammation in the brain.

“It has tremendous potential, and we hope to have this in a human patient by the end of next year,” Musk said.

But before that can happen, Neuralink must first obtain FDA approval by establishing that its technology works safely and effectively in animals. It’s also worth noting that, like some of Musk’s other goals, Neuralink described its 2020 human-trials timeline as “aspirational.”

Musk — who once said A.I. is humanity’s “biggest existential threat” — suggested that it makes sense for humans to work toward merging with technology.

“Even in a benign AI scenario, we will be left behind,” Musk said Tuesday. “With a high-bandwidth brain-machine interface, we can go along for the ride. We can effectively have the option of merging with AI.”

Your brain is remarkably good at mapping out physical spaces — even if it’s an imaginary space like Hogwarts. But how does the brain do it?
Neuropsych

The first personality tests revolved around assessing people’s reactions to ambiguous and often unsettling images. Today, the gold standard is a barrage of questions.
Neuropsych

​Scotland is generating so much wind energy, it could power all of its homes — twice over

Why doesn’t the U.S. generate more electricity from wind?