2017 was a banner year for science, with major advancements coming in numerous areas. While surely some of the discoveries mentioned below will be eclipsed within the next year, this is how science works – careful steps taken by dedicated teams around the world add up and propel us inevitably into the future.

In no order of their particular importance relative to each other, here are ten of the most remarkable scientific accomplishments of 2017:

There have been a number of advancements this year in quantum computers which are getting more and more powerful but are still not quite reaching their potential. But an arguably even more amazing advancement in quantum technology came from a team in China, which audaciously managed to teleport a photon from Earth to a satellite in orbit. They took advantage of the property of quantum entanglement, which allows quantum objects to be linked even when separated by large distances.

For the first time ever, researchers created time crystals – a previously hypothetical crystal that can potentially stay in perpetual motion without energy, thanks to a fracture in time’s symmetry. Imagined in 2002 by the Nobel laureate Frank Wilczek, these structures were deemed “impossible” by most physicists.

3. The Hidden Continent of Zealandia Uncovered

A paper followed by a research expedition identified Zealandia as the seventh largest geological continent on Earth. It is the youngest and most submerged of all continents, with 94% of its surface under water, located near New Zealand.

Here’s a great video from the Zealandia expedition:

In another accomplishment courtesy of the CRISPR gene-editing tool, the biotech startup eGenesis used it to create pigs that won’t transmit viruses to humans. This will pave the way for safely transplanting pig organs. 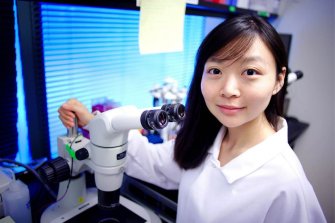 Researchers from the Children’s Hospital in Philadelphia were able to create artificial wombs that grew lamb fetuses for four weeks. They hope to develop a similar technology for human babies in the next three to five years.

Check out this video of how the process works:

In February, NASA announced that astronomers found seven exoplanets dubbed the “Trappist-1 system”. They are comparable in size to Earth, orbiting a nearby star “just” 40 light years away. That’s the most number of potentially habitable planets ever discovered by a single star.

The exoplanet bounty continued in April, when an international team of astronomers found a “super-Earth” orbiting in the habitable “Goldilocks” zone around the red dwarf star LHS 1140. Called LHS 1140b, the newly-located exoplanet is much larger than Earth and likely has an atmosphere. 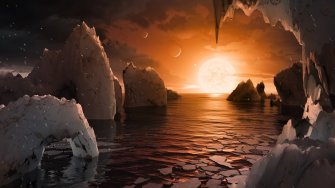 7. Humans May Have Originated In Europe

A pair of finds in 2017 challenged the established notion that humans have originated in Africa. An international team analyzed fossils of the human ancestor Graecopithecus freybergi from Greece and Bulgaria and dated them to be from about 7.2 to 7.1 million years ago, making it possible that humans originated somewhere in eastern Mediterranean.

Later in the year, a footprint discovered in Greece was dated to about 5.7 million years ago, supporting the idea that our ancestors were already living in Europe at that time. The oldest fossils found in Africa previously were dated to be 4.4 million years old. 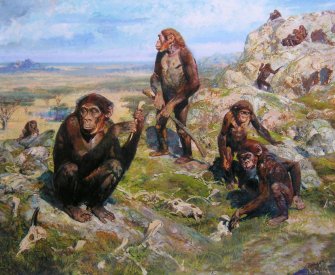 Taking a big step towards cheaper and more ubiquitous space travel, Elon Musk-led SpaceX had a successful test of its reusable Falcon 9 and Falcon Heavy booster systems. After delivering a satellite to space, the booster for the Falcon 9 rocket managed to land itself on a drone ship in the Atlantic Ocean.

Here’s the video of that feat:

9. Detection of Gravitational Waves Shows How Gold and Platinum Forms

Since the detection of gravitational waves for the first time in 2015, the science around these Einstein-predicted space phenomena has been very fruitful. In 2017, scientists at the National Science Foundation, LIGO, MIT, Caltech, and other institutions detected gravitational waves from the merging of two neutron stars about 130 million years ago.

The light resulting from this collision caused a fireball that created the heaviest known elements in the universe – gold, platinum and lead.

This is how such a collision could have gone down:

A new material, theorized in 1935, was created for the first time by researchers at Harvard University. When a way to produce it in a non-lab environment can be found, metallic hydrogen can be used as a superconductor, extending the electrical grid and allowing for superfast Earth-bound and space travel.

Related
Life
Scientists use CRISPR to insert an alligator gene into a catfish
Disease kills off 40% of farmed catfish. This gene protects them.
Neuropsych
How you breathe affects your brain
Your breathing rhythm influences a wide range of behaviors, cognition, and emotion.
Health
What happens when regular porn watchers abstain for a week?
Researchers watched for signs of withdrawal — but didn’t find any.
Neuropsych
Daily caffeine intake temporarily alters your brain structure
Compared to people who took a placebo, the brains of those who took caffeine pills had a temporarily smaller gray matter volume.
Thinking
Why you should laugh at yourself, according to Seneca and Nietzsche
“It is more human to laugh at life than to lament it.”
Up Next
Starts With A Bang
Why NASA’s Kepler Mission Is Toast
The ‘big discovery’ is nothing of the kind. We need a new planet-finding mission to probe the next frontier.Last week, NASA dropped a bombshell that it’s Kepler mission — the greatest planet-finding […]