This discovery finally points to the source of Earth's precious heavy elements, also proves Einstein correct in more ways than one. 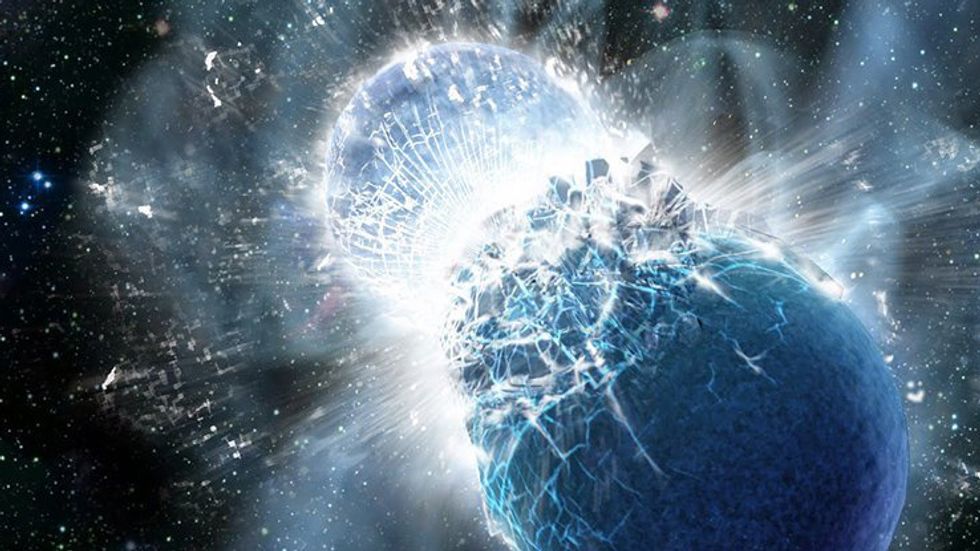 Last September, scientists at a special observatory announced that they detected a gravitational wave for the first time. The detection took place in September, 2015, but wasn’t announced until last year. The observatory is known as the Laser Interferometer Gravitational-Wave Observatory (LIGO). It registered ripples in space-time formed from the collision of two black holes. Apparently, the fabric of the universe ripples just as water does.

We’ve tired the electromagnetic spectrum when it comes to examining the universe. Now, astronomers are fiddling with a whole new aperture, gravitational waves. A little over 100 years ago, Einstein first predicted gravitational waves as something that would happen throughout space-time as a result of dramatic events. September’s announcement proved him right, although he himself thought we’d never be able to detect them, the results being so slight. Officials at the National Science Foundation, LIGO, MIT, Caltech, and other institutions have now made a second groundbreaking announcement, the detection of gravitational waves from another astronomical event, the merging of two neutron stars. This latest signal was detected on Aug. 17. A neutron star is the remnant of a larger star whose core has collapsed. Usually, this is followed by a supernova, where the outer layer of the star blows off in a colossal explosion.

The neutron stars that merged were each 1.1 to 1.4 times the mass of our sun. An event of this magnitude only occurs once in 80,000 years, LIGO scientists say. The light emitted by this neutron star collision resulted in a “fireball,” which is an intense burst of gamma radiation. Such a fireball or kilonova creates the heaviest known elements, such as gold, platinum, and lead, and sends them careening throughout the cosmos.

See an animated clip of a neutron star collision here:

These are small, dense stars. One teaspoon worth would weigh more than 10 million tons, more than the entire population of Earth. As the core continues to collapse, the gravity inside gets so strong it fuses protons and electrons together, forming neutrons, hence the name. When two neutron stars merge, one of two things happen. Either an even bigger neutron star is born or a black hole is made. This event, now known as GW170817, created an ultra-dense neutron star.

Though it occurred approximately 130 million years ago, the resulting gravitational waves reached Earth last August, with the ripples arriving one second before the light did. This is the very first time scientists recorded an astronomical event through both light and gravitational waves.

Over 1,200 scientists from 100 institutions around the world work at the LIGO Scientific Collaboration. LIGO is comprised of two observatories, one in Hanford, Washington, and the other in Livingston, Louisiana. Each contains an instrument so sensitive it can detect a single ripple in space-time lasting just a fraction of a second. In addition to the LIGO detectors, the newly launched Virgo observatory in Italy helped to zero-in on the location of the explosion. Other such observatories are in the works for Japan and India, which will further help pinpoint an event’s location.

Each observatory consists of an L-shaped tunnel. Laser light is sent by mirror down each of them. When there are no gravitational fluctuations, the laser bounces back normally. But when there are ripples in space-time, it squeezes and pulls the beam which gives scientists a reading.

Caltech’s David H. Reitze is the executive director of the LIGO Laboratory. In a press release, he explained the importance of the groundbreaking even. “This detection opens the window of a long-awaited ‘multi-messenger’ astronomy. It’s the first time that we’ve observed a cataclysmic astrophysical event in both gravitational waves and electromagnetic waves — our cosmic messengers,” Dr. Reitze said, “Gravitational-wave astronomy offers new opportunities to understand the properties of neutron stars in ways that just can’t be achieved with electromagnetic astronomy alone.”

The event also solidified another of Einstein’s predictions. Not only does it further confirm the existence of gravitational waves but that they travel at the speed of light. Its little wonder that the scientists who put together LIGO won this year’s Nobel Prize in Physics.

See the announcement of this historic event in astronomy here: