Pre-Humans May Have Developed in Europe Rather Than Africa

The jawbone scanned in the study is the oldest hominin fossil ever found. 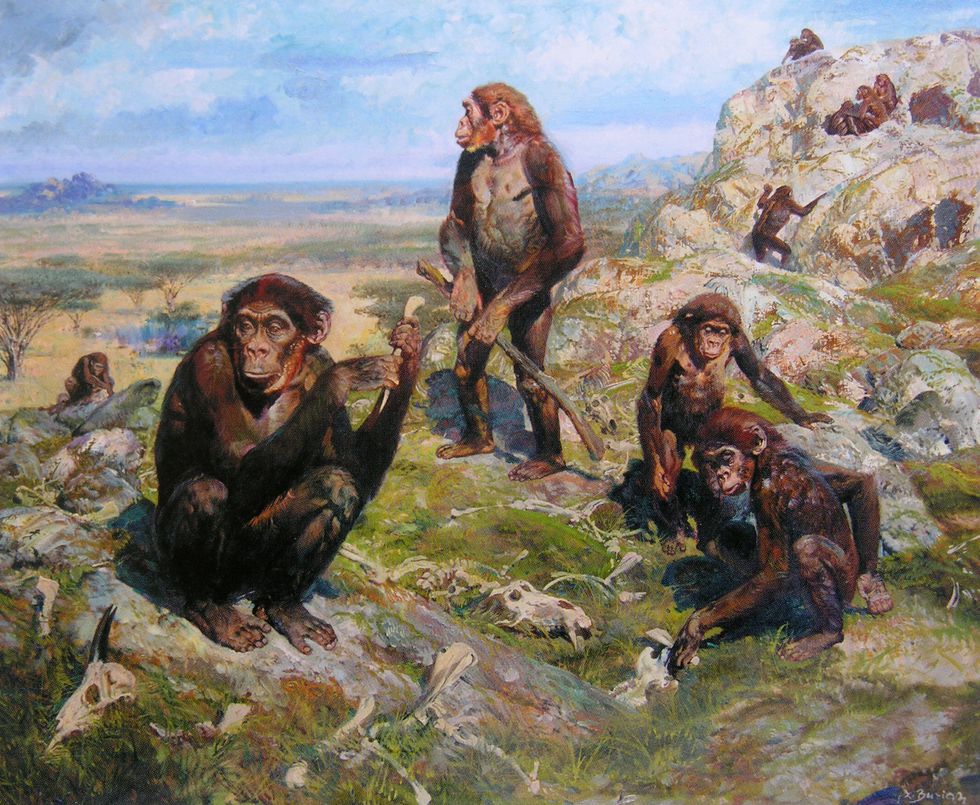 Chimpanzees are our closest living relatives (along with bonobos). Researchers used to believe our first hominin ancestor, who split off from chimps, came on the scene in Africa 5-7 million years ago. But newly discovered evidence from fossils of the hominin, Graecopithecus freybergi— the aforementioned ancestor, puts human development not in Africa, but Europe.

Not only could this discovery cause a paradigm shift in our understanding of human evolution, it puts the date of hominin arrival on Earth farther back than anyone previously thought. That’s according to two interrelated studies, published in the journal PLOS ONE.

The term hominin refers to humans and their ancestral line, while hominids includes the great apes. Here, researchers dated hominin’s arrival somewhere between 7.2 and 7.1 million years ago.There has been great debate for some time, over the timing of human evolution and where it took place.

This study suggests that we developed in the eastern Mediterranean rather than East Africa. Using scanning technology, researchers were able to offer compelling evidence that Graecopithecus had teeth fused in such a way as to make it related to the hominins, Ardipithecus and Australopithecus. The famous Lucy is among the latter species.

Professor Madelaine Böhme led the international team who conducted the study. She hails from the Senckenberg Centre for Human Evolution and Paleoenvironment, at the University of Tübingen, in Germany. She teamed up with Professor Nikolai Spassov from the Bulgarian Academy of Sciences and several other experts, from Canada, France, and Australia. Böhme and her team performed a micro-CT scanner on two different fossils.

One is a piece of lower jawbone, unearthed in Greece, nicknamed “El Graeco.” The other is an upper premolar from Bulgaria, the only two fossils from Graecopithecus ever found. These scans made it possible to visualize the internal structures of the fossils and demonstrate that the roots of the premolar were fused, much like in other hominin species, a feature that is extremely rare, if at all present, in chimps. Graecopithecus may have also had smaller canine teeth, an exclusively hominin trait. In addition, features on the jawbone show other root features that are similar to pre-humans, not chimps, as researchers claim.

While the tooth was found in Bulgaria in 2012, the jawbone was originally discovered in Greece in 1944. Two German soldiers happened upon it while building a bunker. It didn’t have any teeth or much definition, and was disregarded at the time, as an interesting but unimportant find. That’s according to paleobiologist David R. Begun, of the University of Toronto, who was on the team. It turned out to be the oldest hominin fossil ever discovered.

Researchers call the Eastern Mediterranean “just as likely” a place for early hominin and later human development, to occur. In 1994, French paleoanthropologist Yves Coppen posited that climate change in East Africa prompted a great ape migration millions of years ago. Researchers here have built upon Coppen’s theory. They are the first to do so.

We know that the Sahara desert formed in North Africa 7.25 million years ago. Sediments found near the locations of these fossils and an analysis of uranium, thorium, and lead isotopes within them, show that dust storms transported salty dust from the growing Sahara to the northern Mediterranean coastline, as they do today. But this study shows it was much more robust a phenomenon at that time.

Though hard to imagine today, 12 million years or so ago, there were apes in Europe. It was a good place to be one, with wide Africa-like savannahs, to roam, hunt, and forage in. Then, about 10 million years ago, the environment began to change. As the Sahara formed and grew, severe droughts took place. "It is at the beginning of the Messinian, an age that ends with the complete desiccation of the Mediterranean Sea," Dr. Böhme said.  As a result, few stuck around, according to researchers.

An electron microscope image of a dust particle originating in the Sahara 7.2 million years ago, found in old sediments in Greece. Ulf Linnemann, University of Tübingen.

"The incipient formation of a desert in North Africa more than seven million years ago and the spread of savannahs in Southern Europe may have played a central role in the splitting of the human and chimpanzee lineages," Dr. Böhme said. While Yves Coppens theory is called the East Side Story, Dr. Böhme and colleagues are calling theirs the “North Side Story.” With the barrier of the Sahara desert, chimps in Europe and Africa would’ve been separated for about 500 to 700,000 years, causing them to evolve radically differently.

Though a compelling theory, instead of calming the debate in the paleontological community, this study may have exacerbated it. Many experts say that while the study is making a significant impact, a fused tooth and a few root features on a jawbone, may not be enough to support a totally new origin of hominin development.

Prof. David Alba, at the Catalan Institute of Paleontology, in Barcelona, is one expert who believes this isn’t enough evidence to go on. While paleoanthropologist Richard Potts, director of the Smithsonian Institution’s Human Origins Program, goes a step farther, calling the evidence weak and unconvincing.

Prof. Begun says the evidence they have isn’t exactly ideal. “We need better-preserved jaws, and some limb bones to tell us if it was bipedal,” he said. Though these fossils have proven extremely rare, the discovery of another Graecopithecus should either shore up or weaken the findings. That’s why Prof. Begun is planning a trip to Bulgaria in search for more fossils. “If you have one tooth, that means there has to be other specimens out there,” he said.

You can find remnants of evolution in odd places on your own body. To find out more, click here: