The meaning of life according to Nietzsche

Having trouble finding the meaning of life? Nietzsche had the same problem. His philosophy offers us a few suggestions for finding the solution. 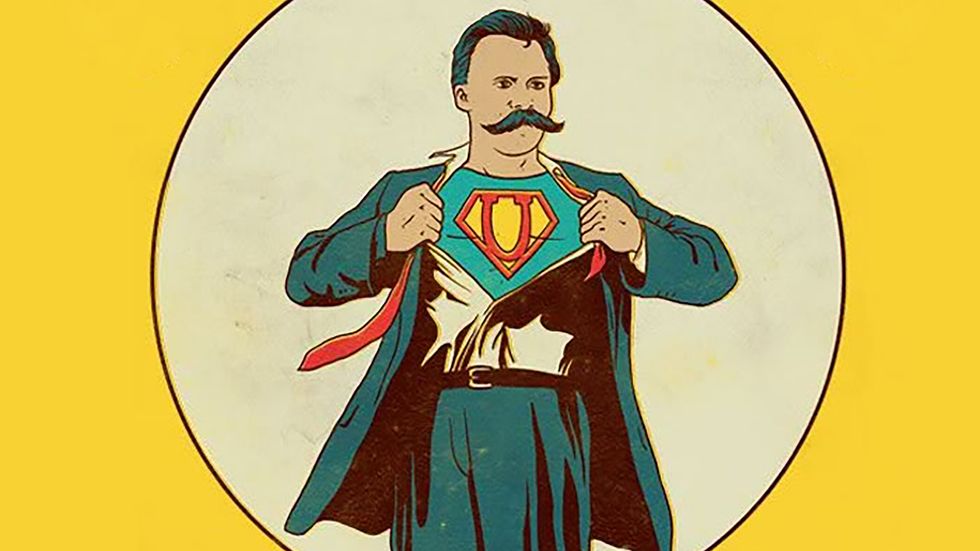 The question of what meaning our lives might have was a major one for Nietzsche. While he is often mistaken for a nihilist, he was in fact quite the opposite. Indeed, much of his work is concerned with the problem of overcoming nihilism despite the slew of problems that drive people towards it.

Interpretations of how Nietzsche proposed to overcome nihilism can vary. From taking up the life of a guru to more brutish images of becoming an all-powerful Superman (Übermensch), the (in)famous philosopher's ideas offer insight into how to find more meaning in our lives. Here's how Nietzsche approached the problem of the meaning of life and how you can use the same approach.

God is dead and we have killed him

For Nietzsche, the problem begins with the death of God. We’ve discussed this concept before, but in brief, it is Nietzsche’s realization that an increasingly secular and scientific society can no longer turn to Christianity to find meaning. In ages past the meaning of everything was assured by God. Without the ability to turn to God, where could modern man find meaning?

Nietzsche found this concerning, as the typical person would be driven to nihilism without help. While mass movements would be able to provide another structure to find meaning in, Nietzsche, ever the individualist, rejected this notion as being a real solution. Instead, he offers us three solutions that we, as individuals, can try to use to find meaning in our post-God lives.

Nietzsche, who was an atheist, understood that religion was useful for providing meaning, community, and helping to deal with the problems of life. His first suggestion was to replace religion with philosophy, art, music, literature, theatre, and other parts of the humanities to provide similar benefits.

The void created by the death of God is a major one and one which we must strive to fill. The humanities offer us the ability to contextualize our sufferings, our efforts, and a chance to see our lives as not so different from those around us. They can offer insights into how we might tackle problems we all must face.

However, it is important to not just study them as bone-dry academic subjects. They must be seen as tools for living. Don’t read history for facts; see it as a way to edify yourself. Tragic plays are not just for entertainment, they are to teach you how to see the beauty in sad events.

French actor Jean-Louis Trintignant holding the skull of Yorick during a scene from the Shakespeare play 'Hamlet', plays like Hamlet can help us deal with issues that religion used to tackle but can no longer handle. (Getty Images)

What if we don’t like the humanities? Or they don't seem to help?

That's fine. He has other ideas. No discussion of Nietzsche is complete without reference to the Übermensch. The Superman that creates their own meaning and values without reference to outside influences. Such an individual can overcome the problem of the meaning of life by simply inventing their own meaning and taking full responsibility for it. Nietzsche offered us a few examples of men who came close to being an Ubermensch; Jesus, Julius Caesar, Napoleon, Buddha, and Goethe among them, but felt that none of them quite hit the mark.

The person who is able to actually able fully carry out this advice, it seems, it still yet to come. For those of us who remain typical humans, we can hope to find some meaning in looking towards the Superman and the evolution of humanity. “Man is something to be surpassed. What have ye done to surpass man?” Zarathustra asks the crowd of onlookers. He sees the psychological evolution of humanity as an ever-advancing story, one which we would do well to take part in.

In the first part of Thus Spoke Zarathustra, Nietzsche makes reference to a tightrope walker to demonstrate the perilous journey of humanity from ape to Superman. (Getty Images)

The Übermensch seems like a little too much. What else is there?

If the Ubermensch isn’t something you value, there is another way to find solace more immediately. Loving your life, no matter what it has in it, is another method to find meaning.  Amor Fati, the love of fate, is one of Nietzsche’s most interesting ideas and one which can offer us a great deal of solace when we most need it.

To love your fate is to know that everything that has happened in your life; the good, the bad, and the ugly, has contributed to who you are and what you are doing at this very moment. To embrace any part of life, says Nietzsche, thus necessitates that you embrace all of it. Trying to create yourself will lead to some failures, but embracing those failures alongside your successes can help re-spark a love of life and can help you see the meaning in even the worst moments.

In a The Gay Science he reveals to us the goal of loving fate more directly. “I want to learn more and more to see as beautiful what is necessary in things; then I shall be one of those who makes things beautiful. Amor fati: let that be my love henceforth! ..... And all in all and on the whole: someday I wish to be only a Yes-sayer.” To say yes to life is one of the fundamentals of Nietzschian philosophy.

But, what can I do today?

At the most basic level, you can set goals for yourself. Perhaps you should try reading the classic novels or go to more Shakespeare in the park to better see how some of the greatest characters ever written handle the problems of life, death, meaning, madness, and love.

There is one thing we must warn you about, however.

Nietzsche was not a happy person. He hated his family, was eternally lonely, women rejected him, his books didn’t sell, he lost his mind, his sister hijacked his publishing rights, and then his ideas were taken up by a bunch of far-right ultra-nationalists who utterly missed the meaning of his individualistic philosophy. His ideas are not designed to make you “happy”, they are designed to help you find meaning in your life. For Nietzsche, these things are going to be at odds, since anything worth doing is going to involve some level of suffering. In The Gay Science, he even explains, “Only great pain is the ultimate liberator of the spirit….I doubt that such pain makes us ‘better’; but I know that it makes us more profound.”

If your goal is happiness in the utilitarian sense, he does have an alternative for you. “The Last Man” is Nietzsche’s caricature of the utilitarian ideal, a dull sort of person who lives an utterly boring life of maximized pleasure and minimized pain. However, since pain is required to do anything worth doing, the life of the Last Man is presented as a pathetic existence that leads to an utterly contented individual. This is a solution to nihilism, but not one that Nietzsche suggests you take.

The problem of how to live a life with meaning has puzzled philosophers since the days of ancient Greece, China, and India. For Nietzsche, the problem took on new meaning in the aftermath of the Enlightenment and the death of God. Even if you don’t agree with his ideas, his contemporary co-founder of existentialism didn’t, his offered solutions to the problem are still illumining for those of us who stay up at night looking for meaning in life.