Friedrich Nietzsche is an influential thinker, but he is not without critics. One of the best of them is British philosopher Bertrand Russell. 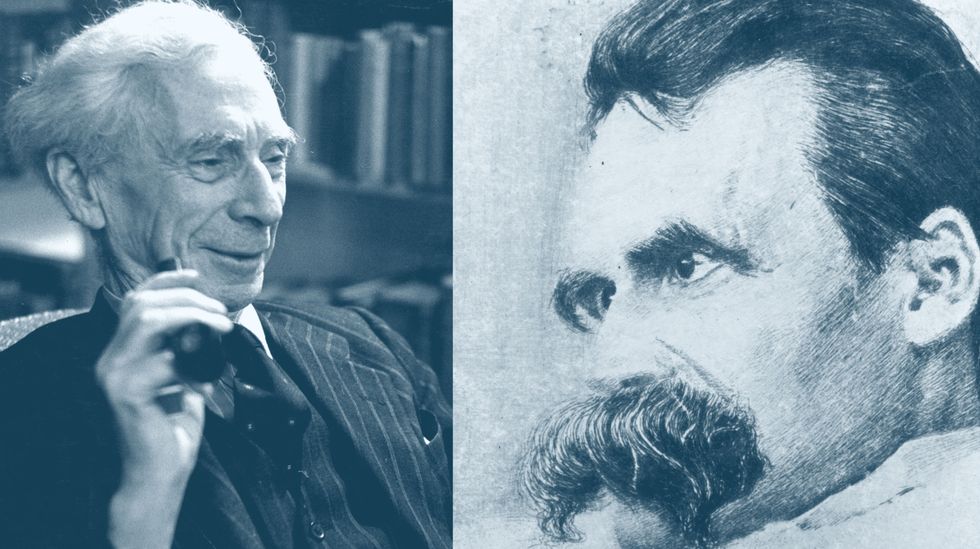 We talk a lot about Nietzsche here at Big Think. His ideas on God, life, the mind, and politics continue to interest even the lay reader of philosophy. However, Nietzsche’s ideas are not without their critics. Today, we are going to look at one of the brightest and harshest critics of Friedrich Nietzsche, the philosopher Bertrand Russell.

Who was Bertrand Russell?

Bertrand Russell was a British philosopher who worked in many fields. His work in logic was paradigm shifting, and his writings on modern love were so shocking to his contemporaries that he found it impossible to find a job for some time after publishing his book Marriage and Morals (1929). While today we would find these radical ideas rather normal, he was made an outcast over them. During his stretch on the academic blacklist, he wrote the book A History of Western Philosophy to pay his bills.

What does he have to say?

In his history, Russell spends a chapter on Nietzsche. While his sources were early translations and Russell was criticized for misunderstanding Nietzschean thought, his criticisms of Nietzsche still have punch and should be considered.

Russell begins by explaining that Nietzsche is not unintelligent and even praises a few of his insights. He explains Nietzschean thought, as he understood it, in ethics and religion alongside an accurate biography. Russell then begins his attack.

He condemns the “power-phantasies of an invalid” that are Nietzsche’s ethics. He points out that every other analyst has found that religion has been used by the nobility to control the poor and not, as Nietzsche argues, used by the weak to limit the ambition of the strong. He further argues that Nietzsche was a megalomaniac and this rotten foundation makes his ethical views questionable in terms of real use.

He found Nietzsche’s ability to justify the suffering of millions for the sake of one great man terrifying, quoting Nietzsche directly with this passage from On the Genealogy of Morality: “The Revolution made Napoleon possible: that is its justification. We ought to desire the anarchical collapse of the whole of our civilization if such a reward were to be its result.”

He ends the chapter by removing all doubt as to his opinions on Nietzsche.

"I dislike Nietzsche because he likes the contemplation of pain, because he erects conceit into a duty, because the men whom he most admires are conquerors, whose glory is cleverness in causing men to die. But I think the ultimate argument against his philosophy, as against any unpleasant but internally self-consistent ethic, lies not in an appeal to facts, but in an appeal to emotions. Nietzsche despises universal love; I feel it the motive power to all that I desire as regards the world. His followers have had their innings, but we may hope that it is coming rapidly to an end."

Bertrand Russell at home in the late sixties. His work was almost the complete opposite of Nietzsche's. (Getty Images)

But wait, how could they both be famous atheists if they were at odds on everything else?

Both Nietzsche and Russell are (in)famous for their intellectual atheism. Nietzsche is well known for declaring that “God is dead” in The Gay Science (1882). Russell is equally as well known for his book Why I am Not a Christian (1927). They both agree that there is no God. They disagree over why religion is bad and what we should do after a society secularizes.

Nietzsche saw religion as being a moral straightjacket for society and particularly bad for free-spirited individuals and potential Ubermensch. He also had concerns over the ability of religion to keep nihilism at bay in a post-Enlightenment world.

Russell saw religion as an unscientific worldview that had outlived any usefulness it had. He opposed it because it had caused more suffering than it was worth, and encouraged people to act cruelly, illogically, and dogmatically.

The fundamental differences between the two philosophers are on display here.

Nietzsche is concerned by the effects of religion on the few while Russell worries about the many. Nietzsche was concerned about the world going to hell without a system to escape nihilism with, and Russell wanted to improve the world through helping people to become more scientifically minded and was unconcerned with the problem of nihilism.

Russell does agree with Nietzsche on one point about religion, however. In A History of Western Philosophy, he does concede that Dostoyevsky’s lifestyle was unduly restricted by his extreme piety, as Dostoyevsky would go to the trouble of sinning just to have another chance to repent. However, while Nietzsche all great men as being held back by religion, Russell sees this as an exceptional case.

So, is Nietzsche this horrible?

The Nietzsche that Russell attacked is the "Hard Nietzsche," today we consider a Nietzsche that is a little gentler and who is often called "Soft." This change is due to increased study, the removal of some right-wing edits to his work, and the denazification in the writings of Walter Kauffmann.

Some of the stances that Russell attacks as being “power-phantasies” are no longer thought to be Nietzsche’s positions and Russell’s idea that Nietzsche argued for the biological superiority of the noble in spirit was mistaken. Some of the arguments Russell dismisses, such as the claim that the “slave morality” of Christianity is used against the noble rather than to keep the poor in line, are making a point that Russell seems to miss.

However, even with these mistakes and misunderstandings, Russell’s criticisms stand as a democratic, equalitarian response to Nietzsche’s aristocratic writings. Russell argued and worked, to end the suffering of all men both in his writings and in his life. Russell reminds us that if we are not shocked when we read Nietzsche, then we are not reading it closely enough.

The contrast between the two brilliant thinkers, alongside their areas of agreement, is striking, and one that we can all learn from.

The Nietzsche that Russell attacked is known today as the “Hard Nietzsche.” The Nietzsche that is discussed today is a little gentler than before and is often called “Soft”. These changes are due to increased study, the removal of the right wing edits his sister added in, and the denazification process German academia endured.