Feeling AI Anxiety? 41% of Americans Fear Getting Replaced by Tech

Is AI a job booster or job killer? 41% of Americans fear getting replaced by AI, automation, and digitization, according to a new survey by SelectHub. What does this mean for the future of work? The survey also found that Gen Xers were most likely to be concerned and that certain industries were more worried than others. 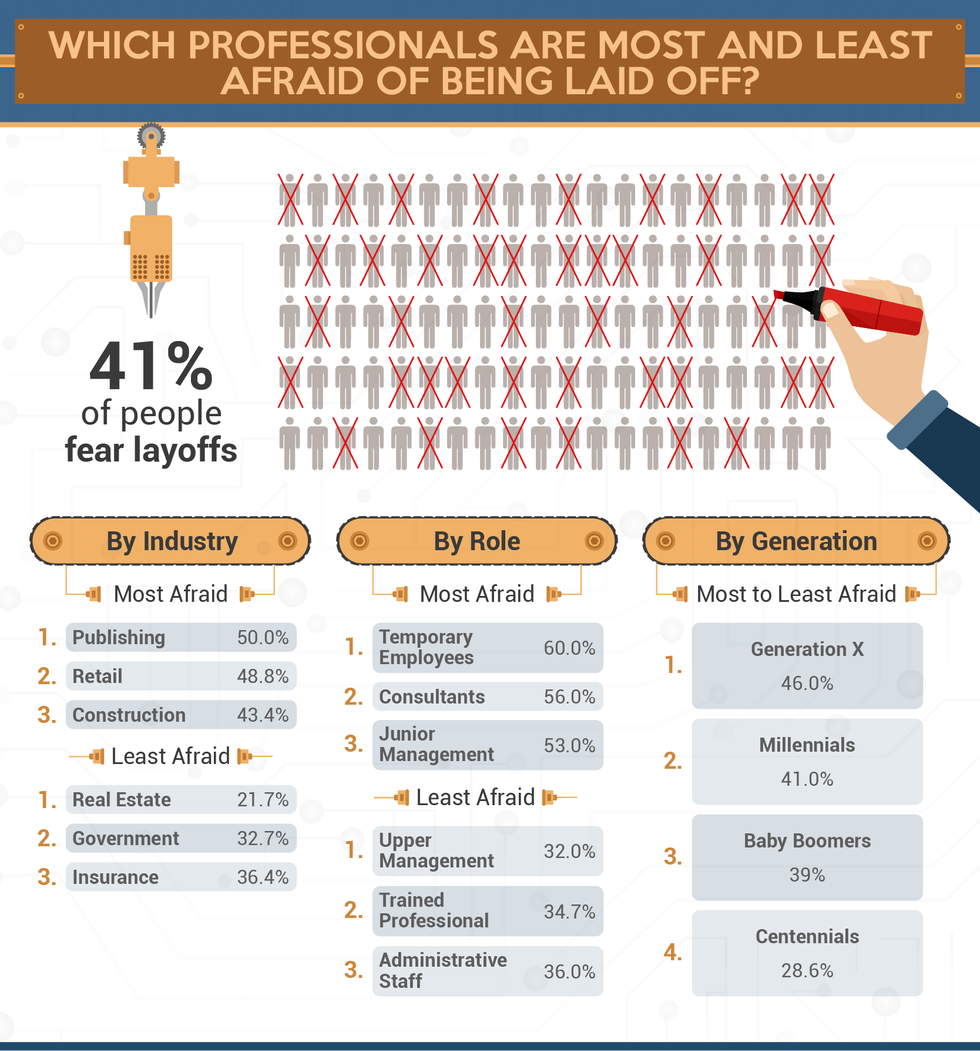 41% of Americans fear getting replaced by AI, automation, and digitization. This is according to new survey results by SelectHub, a "Technology Selection Management" company based in Colorado. The survey captured how professionals feel their jobs will be impacted by disruptive innovation, and what they would do if they lost their job AI, automation, or digitization.

Is advancing tech a job booster or a job killer?

As the survey of 2,000 professionals makes clear, the fear of getting replaced is not spread equally across professions. Certain industries and generations were more optimistic than others.

Industries that have been rocked by disruption, such as publishing and retail, have a higher percentage of professionals that fear being replaced. Retailers, for example, have struggled with consumers who browse in physical showrooms while buying the product cheaper online. It is hard to have the lowest price as a retailer when you have significant overhead. Amazon's push towards quicker times from checkout-to-doorstep, such as through drones, will only add greater pressure on brick-and-mortar retail.

Gen Xers Are Most Likely to Fear Getting Replaced

Gen Xers, at 46%, were the generation that most feared being replaced by tech disruption. This may stem from the fact that they are a sandwich generation in many ways: stuck between Baby Boomers that would retire early if they lost their job and Millennials that may be more flexible with career fluidity.

50% of Gen Xers stated that they would need to get a job in a different industry if they lost their current position through AI, automation, or digitization.

This concern doesn't jive with the premise that tech disruption creates a net positive (or at least neutral) for future positions when eliminating current positions. One of the most contentious debates right now is whether our modern Industrial Revolution will follow past patterns of new job creation (with careers that don't even exist right now), or whether today's upheaval through AI and automation is unique.

When debating the disruption that AI and automation are having and will continue to have in the workplace, people tend to fall into one of three categories:

1. Disruption is good; while certain jobs are being eliminated, many more jobs will be created.

2. Disruption is bad; the rapid advancement of AI and automating jobs has reached a point where companies will need far fewer employees. Increasing productivity and company profits are no longer tied to job growth.

3. Disruption is inevitable; more jobs will be destroyed than created, and we might want to start coming up with a major change to our traditional safety net. It's time to consider a Universal Basic Income.

No matter what category you fall under, it is clear that the fear that advancing tech is having on the workplace is a widespread concern. The fear of getting replaced by a machine far outweighs the fear of offshoring, despite that later being a hot-button political issue. "So I think there’s a very complicated set of questions here, questions about transitions as we move towards a world in which there’s more automation. It’s a much longer conversation that we’ll have to have over a much longer period of time. So I think this question of automation is actually a bigger deal and I think we got distracted and looked at the offshoring question. Of course that’s real, but a bigger question is what happens to work?"-James Manyika

So, What Happens to Work?

The future really may be like the Jetsons, minus the flying cars. An often overlooked feature of the animated series is that George Jetson only worked about an hour a day, two days a week. His career consisted of typically pushing a single button or series of buttons.

"There is a pretty good chance we end up with a universal basic income, or something like that, due to automation," Elon Musk stated in a CNBC interview in November 2016. "People will have time to do other things, more complex things, more interesting things," Musk continued. "Certainly more leisure time."

The Jetsons had our idealized version of the future--a life of ample leisure due to automation and hyper-efficiency. Now that the future is here, many of us are wondering if this is what we truly want.