Psychology professor Jean M Twenge argues that teens are suffering elevated levels of depression and loneliness, and their phones are to blame. 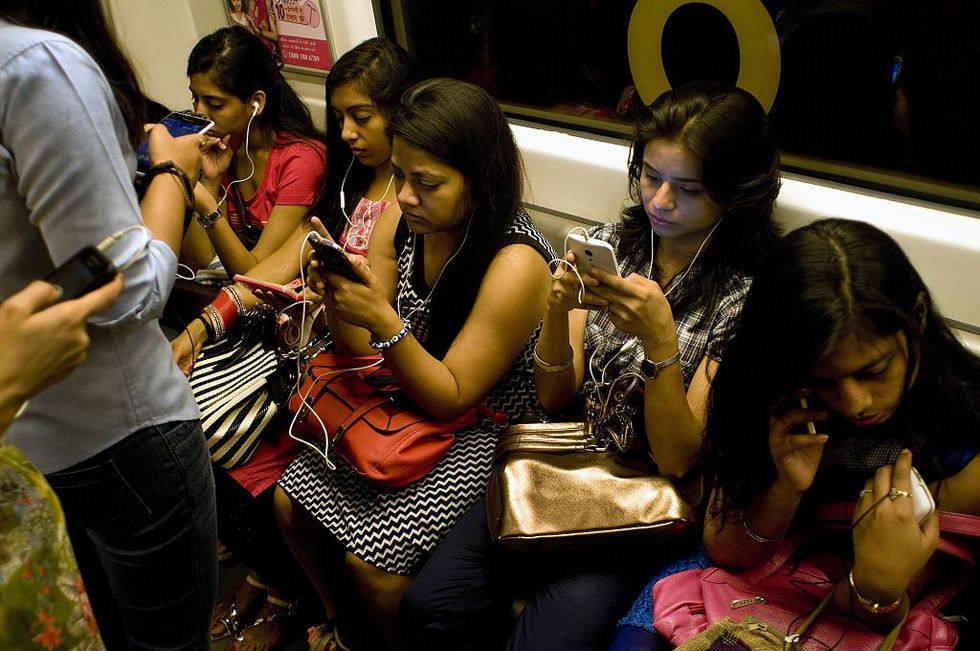 Indian women use their smartphones as they travel in the metro carriage reserved for women in New Delhi on July 14, 2015. (AFP Photo/Anna Zieminski)

Naming a generation is no easy task. While I've associated my own, Generation X, with Douglas Coupland's 1991 novel of the same name, the term was in circulation as far back as 1965, when Hungarian photographer Robert Capa used it to title a photo essay. Billy Idol dubbed an early punk band Generation X back in '76. Still, Coupland is regarded as the popularizer.

With Millennials firmly embedded in the cultural milieu, candidates for the next generation are pouring in. San Diego University psychology professor Jean M Twenge has thrown her hat into the ring with her new book, iGen, which has a subtitle that would fulfill my word count for this entire article. Let's just say it's about kids born between 1995 and 2012, and is concerned with how technology is making them unhappy and unprepared to be adults.

As a mother of three young girls, Twenge has plenty of anecdotal experience. More importantly, she's studied generational shifts for 25 years, as she writes in a recent article. While every generation looks down at up-and-comers with a mix of derision, scorn, and confusion, Twenge's data offer stark indicators of her thesis: smartphones are messing with our heads.

In 2012, Twenge began noticing “abrupt shifts" in teenage behavior, which she likens to mountains and cliffs instead of slopes. This is the year when over half of Americans first claimed smartphone ownership. A recent survey shows that three out of four teens now own an iPhone.

Twege begins her story with a conversation with a 13-year-old she names Athena, who spends most of her time hanging out in her room scrolling through social media on her phone. This quote from Athena gets right to the point:

We didn't have a choice to know any life without iPads or iPhones. I think we like our phones more than we like actual people.

Her observation isn't an outlier. Athena's feelings on other people has broadly persisted through recent years. Teens are hanging out together less (down 40 percent between 2000-2015), dating less (only 56 percent of high-school seniors date, compared to my generation, which was 86 percent), having less sex (40 percent less than 1991), and getting less sleep (40 percent are getting less than seven hours). The only thing that seems to be increasing is their loneliness.

More comfortable in their bedrooms than in a car or at a party, today’s teens are physically safer than teens have ever been. They’re markedly less likely to get into a car accident and, having less of a taste for alcohol than their predecessors, are less susceptible to drinking’s attendant ills.

Yet she also says teens are facing a severe mental-health crisis. Twenge references happiness, but there is another more important quality, one less valued but more valuable, to consider: contentment. Championing happiness is not new, though the quest for it is in part driven by the positive psychology movement: the idea that being happy is the primary marker of a life well lived. Contentment is another story altogether.

Contentment is possible in uncomfortable situations. In fact, its worth is discovered when you're distressed, facing tough circumstances. Smartphone technology is antithetical to contentment by design. The algorithms are driven by distraction. A distracted mind cannot be content, for it constantly seeks stimulation. That this is occurring during a time of prefrontal cortex development, when the habits that will dictate adulthood are being formed, means feelings of depression and loneliness will continue.

What Twenge is really driving at is addiction, and addictions are hard to break. America is not very good at treating them. Our drug wars are failed race wars. The plight against the opioid crisis receives plenty of lip service with little actual structural change—the pharmaceutical industry and its legions of lobbyists continue to produce and promote product. Any hint of combating food addiction, such as soda taxes, are treated like assaults on freedom. That smartphone addiction has not yet been widely named is indicative of the fact that leaders themselves are addicted. We joke that we're being governed by Twitter. It's a bad joke because we know it's true.

Every addiction manifests differently in society. Depression levels among eighth graders increase by 27 percent for heavy social media users. Teens spending three hours or more a day on their devices are 35 percent more likely to consider suicide. Over the past decade, Twenge notes, homicide rates have dropped among teens. Suicide rates have moved in the opposite direction.

We're an addictive animal. There is no gene for addiction; no one is more particularly disposed to it than someone else. Environment matters. I've seen friends post photos of their infants staring into iPads. (“How cute!") Such an environment sets up the child to be a Twenge statistic. I also have friends who strictly limit their children's screen time. From my experiences, these children tend to look me in the eye when speaking to me, something many adults have trouble doing.

I remember when my parents first allowed me to have an answering machine, back in '80-something. When I began dating I'd rush home hoping to see a blinking light. Saddened by the solid red light, I'd hop onto my bike and head to the park. The problem with having a blinking toy in your hands at all times is that the suspense is absent. You're always on call, and so always disappointed by what's not occurring. Your attention becomes fixated on a screen instead of the world in front of you. You forget the bike; you forget the park.

Twenge believes the data suggest parents need to monitor more. But how does that happen when the parents themselves are addicted? I've lost track of the number of texting mothers and fathers I've spotted driving along freeways and side streets, child seat firmly affixed to the back seat. If they can't admit they have a problem, can we expect them to realize they're setting up their children for a lifetime of dependency?

Twenge's hope resides in the kids themselves. Fortunately humans are resilient. I survived a childhood of microwavable dinners; today I rarely put a processed food into my body. Cooking became not only a pastime, but a necessity. When Twenge asks Athena how she feels when her friends stare at their phones while in conversation, her reply is revealing:

It hurts. I know my parents' generation didn't do that. I could be talking about something super important to me, and they wouldn't even be listening.

That we should all learn from Athena is be a step in the right direction, so long as we don't take that step while staring into a screen.