The recent terrorist attack that killed 50 people in New Zealand mosques has been dubbed “a mass shooting of, and for, the internet.” Livestreamed on Facebook, the killer referenced a controversial YouTube star before he began his shooting spree. Many of the negative effects of social media are really just beginning to be known. So far, it’s not looking good.

Not that social media is inherently bad — this is not a binary media. It does not necessarily cause mental health issues. What it is doing, however — especially in young people, a new study argues — is exploiting depressive and suicidal tendencies. And it appears that this trend is especially insidious in the developing minds of teenagers and young adults.

The study, which was published in Journal of Abnormal Psychology on March 14, was led by psychologist Jean Twenge at San Diego State University. The author of iGen and Generation Me, Twenge has devoted her career to researching the effects of technology and social media on the adolescent brain (among others). Her 2017 article in The Atlantic speculated that teenagers and young adults are experiencing increased mood disorder problems that correlate perfectly with the release of the iPhone.

This problem is affecting every generation (or cohort) in some manner. Depression-related expenses currently cost the United States $106–$118 billion annually. A major depressive disorder will affect one in six people during their lives; 17 percent of those experiencing treatment-resistant depression attempt suicide. More contemplate it. Currently, about 45,000 Americans take their own lives every year.

For this study, Twenge and her partners hone in on data from 2005 to 2017. They wanted to know what age groups were most affected by increased instances of depression. Incidence of mood disorders, they write, “generally lessens with age.” In the date range cited, depressive incidents among adolescents aged 12 to 17 increased by 52 percent (8.7 percent to 13.2 percent); between 2009-2017, they increased 63 percent among young adults aged 18-25 (8.1 percent to 13.2 percent).

These statistics were pulled from annual surveys conducted by the U.S. Substance Abuse and Mental Health Services Administration, which included data from 212,913 adolescents and 398,967 young adults. These cohorts were not the only two to experience an uptick in depression. In fact, alongside adolescents, Boomers were observed to be most affected. As the researchers write,

“The effects were primarily due to cohort, with the Boomer cohorts of the 1950s and the iGen cohorts of the late 1990s the most likely to experience serious psychological distress, MDE in the last year, and suicide-related outcomes.”

Increases were most stark among women. Though the trend affected white Americans most, increased distress was observed across racial and ethnic groups. Mood disorders were worst in individuals in the highest income bracket. Interestingly, given the timeline of the results, the researchers are confident that neither economic conditions or drug or alcohol use (rates have remained steady or are falling, depending on cohort) are to blame.

They also feel that neither self-reporting or opioid usages is behind this uptick. Willingness to admit emotional problems couldn’t account for all of the observed trends; opioid addiction predominantly affected particular cohorts.

There are two trends that do appear to be causing this problem, however.

“Another possibility is that the increased use of electronic communication and digital media during this time period may have changed modes of social interaction enough to affect mood disorders and suicide-related outcomes. For example, individuals who spend more time on social media and less time with others face-to-face report lower well-being and are more likely to be depressed.” 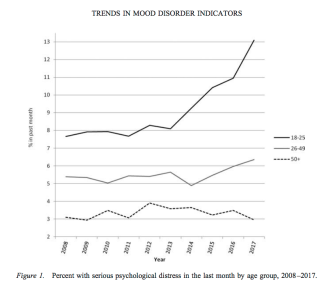 Tied into increased screen time, which could lead to engaging in or being the victim of cyber-bullying, is sleep issues. Sleep duration is declining among all age groups, but especially adolescents and young adults during a time in life when they need it the most. Lack of sleep has been linked to mood disorders, suicidal ideation, and suicide attempts.

Though the internet is also used as a form of connectivity — say, in this case, to seek counseling for psychological problems and mood disorders — the researchers suggest further studies on how best to leverage technology for the support of individuals.

In her Atlantic article, Twenge points to a number of disturbing trends among teens: hanging out with friends less; dating less; having sex less; sleeping less. All of that time not doing those activities appear to be spent in front of a screen, making another finding — feeling isolated and lonely — rather obvious.

Utilizing the tech for good is one step forward. But another would be to put the phone down more often. A challenging prospect, given how tied into our lives they’ve become. If you’ve only grown up in a world viewed through a screen, learning that other worlds — namely, the real one — exist might seem impossible. Yet some distance is feeling more necessary by the day.

A psychiatrist studied 1,000 near-death experiences. Here’s what he discovered.
▸
7 min
—
with
Dr. Bruce Greyson
Up Next
Starts With A Bang

Could The Milky Way Be More Massive Than Andromeda?

The only other large galaxy in the local group is larger in size and has more stars. But mass? Perhaps we’re the biggest, after all.The Milky Way is home to the […]