We all seem addicted to our smartphones and its little wonder. They were developed with certain aspects of the slot machine in mind. The average person checks their phone 150 times per day. A recent Deloitte survey finds that 82% of Americans own a smartphone. Of them, 92% use it while out shopping, 78% while eating at home (when they should be talking to their loved ones), and 44% while crossing the street.

Teens may be the most susceptible to smartphone addiction. 73% of US adolescents have a smartphone or can gain access to one. Of them, 96% go on the internet daily, a Pew Research Center poll found. Should parents limit exposure? Probably. One of the concerns is socialization. Being used to doing most of their social interactions online may cause teens to find it difficult to address issues and interact with others face-to-face.

On another and perhaps more concerning front, neuroscientists have wondered what all this exposure to smartphones is doing to our neurological health, especially in children and teens whose brains are still developing. Hyung Suk Seo, M.D., professor of neuroradiology at Korea University in Seoul, South Korea and colleagues, used a novel approach to find out. 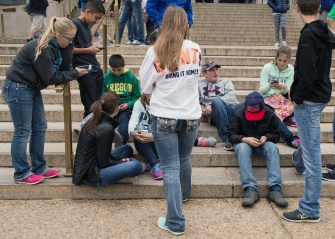 73% of US adolescents have a smartphone or can gain access to one. Of them, 96% go on the internet daily. Credit: Getty Images.

First, they recruited 19 young people being treated for smartphone or internet addiction. 9 were boys and 10 girls. They’re average age was 15.5. Next, the severity of their addiction was evaluated using standardized addiction tests. These included assessments of their productivity, feelings, social life, and daily routines.

Turns out, smartphone addicted teens had higher rates of anxiety, depression, impulse control problems, and sleep disorders. Then these participants were compared to 19 other teens who matched their group in age and gender makeup. These stood as healthy controls.

Dr. Seo and his team evaluated the teens using a technique called magnetic resonance spectroscopy (MRS). This identifies and tracks the movement of biochemicals within the brain. MRS is usually employed to evaluate biochemical concentrations in patients with Alzheimer’s, brain tumors, or certain mood disorders. In this study, researchers found that teens who were being treated for smartphone or internet addiction were much more likely to suffer from anxiety or depression. Chemical imbalances in the brain are responsible.

12 of the addicted participants received cognitive behavioral therapy (CBT) over the course of the study. The type used was adapted from a program catering to gaming addicts. Such participants had MRS exams before and after CBT took place. What researchers found is in smartphone and internet addicts, a certain neurotransmitter in a part of the brain called the anterior cingulate cortex, had a higher level of activity than normal.

This area is known to be linked with addiction. It’s associated with the reward center of the brain. So, this research clearly shows that the brain has been altered as a result of internet or smartphone addiction. 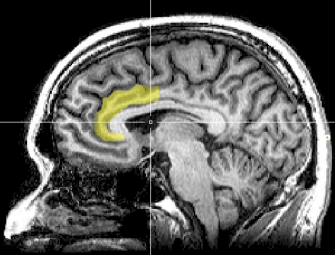 The anterior cingulate cortex, which plays a role in addiction. Credit: By Geoff B Hall, Wikimedia Commons.

The identified neurotransmitter is called gamma aminobutyric acid (GABA). In greater concentrations, it’s known to slow brain signals. Previous studies have found GABA is involved in motor control, the regulation of certain brain functions, and vision. An overabundance of GABA may lead to anxiety.

Another neurotransmitter in abundance among those with such addiction is glutamate-glutamine (Glx). Ratios of GABA to Gix or GABA to creatine in this area of the brain help regulate the emotions and cognitive ability. Addiction, anxiety, and depression can occur when they’re out of balance.

Higher GABA activity may be related to the breakdown of certain integration and regulation processes within the cognitive and emotional networks of the brain. Luckily, the ratios of both neurotransmitters returned to normal after smartphone and internet addicts underwent CBT. These findings were recently reported at the annual meeting of the Radiological Society of North America, this year held in Chicago. Dr. Seo and colleagues say these changes in the brain may mimic those seen in other addictive disorders.

One limitation was the size of the sample used. A much larger follow-up study should be conducted. Some experts suggest including fMRI scans as well, so that blood flow can also be tracked. These results “may contribute to our understanding the pathophysiology of and treatment for addictions,” Dr. Seo said. Though the findings are compelling, they remain preliminary until they’re published in a peer-reviewed journal.

To learn further how constant smartphone use is affecting us, click here:

Related
The Learning Curve
Why do high IQ people stagnate in their careers? Emotional intelligence
Research suggests that emotional intelligence is more vital for success than IQ.
The Present
Even in the age of AI, some problems are just too difficult for computers
Computers are growing more powerful and more capable, but everything has limits
The Future
How the metaverse will revolutionize K-12 and higher education
Imagine going on a tour through the human circulatory system as a tiny cell. That is just one example of education in the metaverse.
Starts With A Bang
Ask Ethan: What are white holes, and do they really exist?
In General Relativity, white holes are just as mathematically plausible as black holes. Black holes are real; what about white holes?
Life
Strange life forms create an “alien” ecosystem in an abandoned uranium mine
Slimy biofilms made up of bacterial and eukaryotic life forms have taken over an abandoned, flooded uranium mine in Germany.
Up Next
Hard Science
Researchers Discover Excitonium – a Weird New Form of Matter
Researchers create a new form of matter, first theorized 50 years ago.