How Americans feel about abortion

Abortion is an extremely divisive issue that nearly splits the country down the middle. According to a May 2021 Gallup poll, 47% of Americans said that abortion was morally acceptable, up from 39% in 2009, while 46% said it was morally wrong. About 6% said it depends on the particular situation.

The picture gets more complicated after factoring in the stage of pregnancy. A 2021 survey from The Associated Press-NORC Center for Public Affairs Research found that 51% of Americans believed that abortion should be legal or “legal in most cases” during the first trimester. However, that figured dropped to 34% when respondents were asked about abortion in the second trimester, and 19% when asked about the third.

In the political arena, the divide couldn’t be clearer. According to a 2022 ABC News/Washington Post survey, 79% of Democrats said they support legal abortion compared to 33% of Republicans. Notably, support for legal abortion has increased significantly among Democrats in recent years, rising from 63% in 2007 to 80% in 2021, according to Pew Research Center. In contrast, views among Republicans have remained relatively steady.

Americans do seem to agree on abortion when it comes to extreme cases, such as pregnancies due to rape or pregnancies that endanger a woman’s life. Among pro-life Americans, for example, 71% support legal abortion when the woman’s life is in danger and 57% support it for cases of rape or incest, according to 2018 survey data from Gallup.

What Alabamians think about abortion

In Alabama, the ground zero of the abortion debate due to a recently passed abortion ban, repeated polling has shown that most of the voters oppose abortion rights, women included. A 2014 Pew Research Center poll found 58% of residents saying abortion should be illegal in mostly all cases. 51% of the pro-life respondents were women. Other polling indicates similar patterns.

The New York Times reports that in 2017, the citizens of Alabama approved modifying the State Constitution to include the language that the state must “to recognize and support the sanctity of unborn life and the rights of unborn children, including the right to life.”

Most Alabamians, however, do think the extreme abortion ban recently passed by their legislature goes too far. Only 31% supported having no rape/incest exception in a 2018 poll. 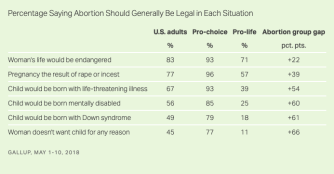 Americans generally agree on the legality of abortions in cases of a woman’s life being endangered or those involving rape and incest.

How many abortions are performed?

According to CDC stats, 629,898 abortions were reported in the US in 2019. Compare that to the period from the late 1970s till the late 1990s when the number of abortions was regularly fluctuating between 1 to 1.4 million per year.

In general, abortion rates in the US have been falling since the early 1980s, with rates in recent years nearing all-time lows, likely thanks in large part to Improved access to contraceptives.

Still, it remains a fairly widespread procedure, with about 23.7% of American women having an abortion before reaching 45, concluded Guttmacher Institute’s 2017 research. Before 30, the percentage is 19%. Before 20 it’s 4.6%.

This article was originally published on Big Think in May 2019. It was updated in May 2022.

Tags
cultureCurrent EventsEthicsreligion
In this article
cultureCurrent EventsEthicsreligion
Related
A Wave of New Abortion Restrictions Is Eroding Roe v. Wade
The dream of overturning Roe v. Wade may yet come to pass for abortion opponents. But as state-level restrictions on the right to abortion continue to mount, the anti-abortion movement is steadily chipping away at the spirit of Roe while it remains on the books.
Pope Francis: Catholic Church “Obsessed” with Abortion, Gay Marriage and Contraception
While Francis points the finger at leaders who have been “obsessed” with divisive social issues, some find his silence on these issues to be problematic.
Politics & Current Affairs
Supreme Court rules pro-life pregnancy centers don’t have to inform women of abortion options
The decision, supported in the majority opinion by the court’s conservative justices, is a victory for nationwide religious groups and a defeat for the mostly liberal state.
Guest Thinkers
Do profit motives limit a woman’s right to chose abortion?
This week Feministing called the UK Bill that would have banned abortion counseling “anti-choice” legislation. I think they have got that all wrong. The current arrangement gives abortion providers a financial […]
Culture & Religion
Fetuses Can Recognize Faces. How Will This Change the Abortion Debate?
This is the first vision test of a fetus from inside the womb.
Up Next
Hard Science
Cheers! How the physics of fizz contributes to human happiness
The phenomenon that makes our favourite drinks bubbly is, alarmingly, the same one that causes decompression sickness in divers. Why do we still love it?