In a 5-4 decision, the Supreme Court on Tuesday ruled against a California law that required anti-abortion pregnancy centers to display notices informing women that alternative, state-funded services could provide the procedure.

The decision, supported in the majority opinion by the court’s conservative justices, is a victory for nationwide religious groups and a defeat for the mostly liberal state.

It was a violation because the centers were compelled to speak a message to which they’re fundamentally opposed, according to the court. 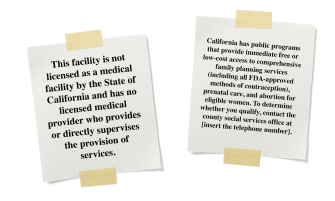 The court’s majority saw no justification to require unlicensed centers to declare their status, writing, “California has not demonstrated any justification for the unlicensed notice that is more than ‘purely hypothetical.’”

California has about 200 religiously affiliated “crisis pregnancy centers” whose goal is to encourage low-income pregnant women to choose adoption or birth over abortion. The state’s lawmakers had found that the centers used “intentionally deceptive advertising and counseling practices that often confuse, misinform, and even intimidate women from making fully-informed, time-sensitive decisions about critical health care.”

The National Institute of Family and Life Advocates (NIFLA), a public interest law firm that represented more than 100 religiously affiliated pregnancy centers, challenged the law in 2016.

“Can the government impose and compel a faith-based ministry to proclaim a message that they are fundamentally opposed to with the risk of being fined or shut down?” Thomas Glessner, founder and president of NIFLA, told Fox News. “That’s the issue here.”

The 9th Circuit Court of Appeals upheld the law.

“California has a substantial interest in the health of its citizens, including ensuring that its citizens have access to and adequate information about constitutionally protected medical services like abortion,” Judge Dorothy W. Nelson wrote.

“The notice informs the reader only of the existence of publicly funded family-planning services. It does not contain any more speech than necessary, nor does it encourage, suggest or imply that women should use those state-funded services.”

A key factor in that court’s decision was it considered the notices to be “professional speech,” which typically doesn’t enjoy the same protections as regular speech under the law.

The Supreme Court’s majority disagreed, however, writing that it’s historically “been reluctant to mark off new categories of speech for diminished constitutional protection.”

“Speech is not unprotected merely because it is uttered by professionals.”

But Justice Stephen Breyer, writing for four liberal dissenters, said the majority’s decision could have unintended consequences. For example, Breyer said that other laws requiring organizations to put up notices—“ranging from securities disclosures to signs at petting zoos”—could now be interpreted as compelled speech violations, if the majority’s position is taken literally.

To learn more about how crisis pregnancy centers can be started without a license and misinform women about their rights, watch:

Related
Starts With A Bang
The path forward for astronomers and native Hawaiians
A history of injustice and the greatest natural location for ground-based telescopes have long been at odds. Here’s how the healing begins.
Thinking
“Give a f***, actually”: The surprising benefits of being grateful for things you dislike
Radical Emotional Acceptance calls on you to celebrate all of life’s emotions — even the negative ones.
Thinking
Visual thinking: How to understand the inner lives of animals
Humans are good visual thinkers, too, but we tend to privilege verbal thinking.
Strange Maps
The world’s longest straight line connects Portugal to China
It’s nearly 20,000 miles long.
The Well
This is what the fourth dimension looks like
Left–Right, Back–Forth, Up–Down. What’s the fourth dimension?
▸
3 min
—
with
Brian Greene
Up Next
Effective Communication Techniques for Direct Communicators
In the Communication Styles Matrix, there are four basic styles of communicators: the Director, Expresser, Thinker, and Harmonizer. Typically, people are a combination of at least two communication styles—one “primary” […]