William Shatner created the role of Captain James T Kirk on the original Star Trek, and won two Emmys and a Golden Globe for his portrayal of Denny Crane on “The Practice” and “Boston Legal”. He’s also written nearly 30 bestselling books of fiction and non-fiction and released two albums of music with the artist Ben Folds. His new book Zero-G, coauthored with Jeff Rovin, is a science fiction terrorism thriller set in the year 2050. It begins with an unnaturally powerful Tsunami that destroys most of the coast of Japan, and follows FBI Field Agent Samuel Lord as he attempts to unravel the mystery.

In this extra feisty episode of Think Again – a Big Think Podcast, Shatner and host Jason Gots talk ego, the extinction of the human race, bullying, and whether or not it’s a dog-eat-dog world out there. 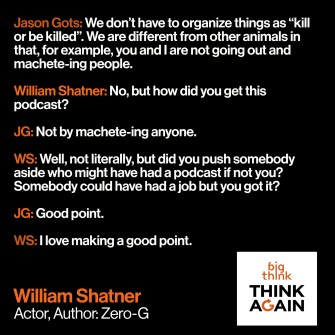 Subscribe for counterintuitive, surprising, and impactful stories delivered to your inbox every Thursday
Related
Starts With A Bang
The good reasons scientists are so hostile to new ideas
Many people out there, including scientists, claim to have discovered a series of game-changing revolutions. Here’s why we don’t buy it.
The Present
Climate change is altering the chemistry of wine
Smoke taint from wildfires is gross, even to wine amateurs.
13.8
Could a hidden variable explain the weirdness of quantum physics?
We have searched and searched but have never found one.
The Past
The Wild West was lawless and chaotic — and the police helped keep it that way
Lawmen and outlaws were often the same people.
Thinking
6 great philosophers and how they used their political power
Most philosophers merely contemplate the world, but what about the ones who actually tried to change it?
Up Next
High Culture
Why Bob Dylan Deserves a Nobel Prize in Literature
Though the logic of the Nobel committee is pretty easy to glean when it comes to the sciences, in other, less-defined categories, it surprises on a fairly regular basis.