THIS IS CONGO, a new documentary film, attempts to wrap its mind around the incomprehensible realities of the Democratic Republic of Congo, almost 60 years after it was founded. At one point, commenting on one of the more incomprehensible recent events, a high-ranking military officer remarks:

“They will say, “This is Congo”

But when will they ask “Why? why is Congo like this?”

Where do we begin? Where can we begin? For as long as I can remember, the news out of Congo has been bad. But my memory of the news only goes back about two decades, to when I started paying attention.

The cycle of violence is a funny thing. It has its own momentum. People get swept up in it for personal reasons, or manipulated by politicians fanning the flames of old resentments. Ask anyone on either side of a blood feud where it started—who threw the first stone, and when the sun goes down, they’ll still be talking.

Where does Congo’s trouble begin? Why is the country in a seemingly unending state of war between marauding rebel groups and marauding government soldiers, the people’s lives torn to shreds in between? And even if the people of Congo could fully trace this nightmare to its roots, how could they save the tree?

My guest today is documentary filmmaker Daniel McCabe. His new film THIS IS CONGO asks all of these questions and more. 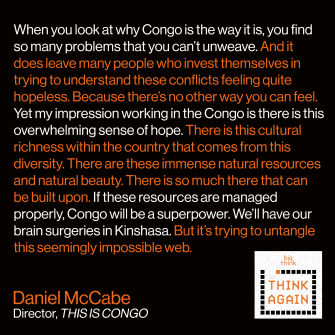 Our Solar System’s outer reaches, and what’s in them, was predicted long before the first Oort Cloud object was ever discovered.
Up Next
Surprising Science

New research spots a remarkable meeting of Jupiter’s jet streams and its magnetic field and proposes that it may contain the explanation for the planets’ striking cloud patterns.