When I started college at New York University in 1990, nobody lived in Brooklyn. Brooklyn was the dark side of the moon. At least that’s how we NYU students thought about it. Lots of people lived in Brooklyn, of course. Just not us. It’s 2018, and Brooklyn has become an international brand, synonymous with artisanal pickles, gastropubs, and luxury condos. It’s the place even former NYU students can’t afford to live anymore.

But in a couple of Brooklyn neighborhoods, people are still dressing and living in many ways like it’s the 18th century, and adhering to laws that date back centuries, even millennia earlier.

I’m talking about Hasidic Judaism, and particularly, today, about Borough Park, Brooklyn, where this community thrives. And even more particularly about one woman—Rachel “Ruchie” Frier—who, in spite of being religiously observant as most humans would define it has nonetheless become a thorn in the side of the more conservative elements of this already deeply conservative community. The all-female volunteer ambulance corps she started was a radical move for Borough Park, and it’s the subject of 93Queen, a new documentary by Paula Eiselt. 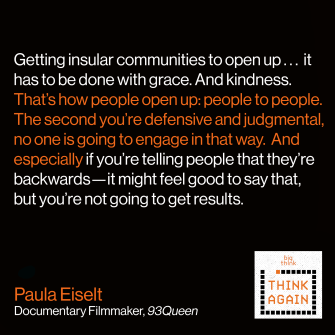 Michael Hobbes on myths and realities of the millennial generation

Guess which country has 269% inflation.
Up Next
Surprising Science

A new report from the American Meteorological Society shows that Earth’s atmosphere had the highest levels of carbon dioxide in the atmosphere in 2017 than it’s had in the past 800,000 years.