Elon Musk has a pretty ambitious plan to get humans to live on Mars in 40 years. The key part, as he announced yesterday at the International Aeronautical Conference, is creating technology that would bring the cost of the journey down and bring enough people and supplies to Mars to create a self-sustaining civilization.

In order to do that, Musk and his private space development company SpaceX need to bring the cost of a Mars mission down from $10,000,000,000 per person to $200,000. They identified 4 main ways to do that: 1) creating fully reusable spacecraft; 2) refueling them in orbit; 3) producing propellant on Mars, and; 4) using the right propellant.

SpaceX is tackling the reusability problem by building the rocket in 3 separate sections: the spaceship, the rocket booster, and the propellant tanker. They’re rethinking the design components of all 3 of those sections, too. For starters, the rocket needs to be bigger. WAY bigger:

See that tiny dot at the bottom right of the ship? That’s a person. Credit: SpaceX

That might seem excessive, but not to Musk. “The rocket needs to be about this size to fit 100 people in the pressurized section, plus luggage, cargo, propellant plants, iron foundries, pizza joints. We need to carry a lot of cargo.”

Musk theorized that SpaceX most likely be able to expand the crew section and bring closer to 200 people to minimize the number of trips. He also clarified that they’ll flat-pack all the cargo to maximize speed and efficiency. Then he broke down the math: “If a civilization needs 1 million people, [if we bring] 100 people per ship that’s 10,000 trips.” How exactly is all that stuff supposed to fit? Like this:

The interior of the Mars spaceship. Credit: SpaceX

“In order to make people want to go, it’s gotta be really fun,” Musk said about the design. “We have to design it like people see in the movies. Not cramped. Lots of room to move.”

Aside from being a fun design, the rocket is being built out of carbon fiber. SpaceX chose carbon fiber because it’s a durable material that wouldn’t require a separate liner, decreasing the mass of the overall ship. But carbon fiber tends to crack at a large scale, so “it’s a huge technical challenge to make cryogenic tanks out of it,” Musk admitted. “It’s just really hard to make huge carbon fiber structures that can do [all the things we need it to] and carry incredible loads.”

But his team is trying. And they’ve already built the first tank.

“This is the hardest part so we wanted to tackle it first,” Musk said of the tank. “Carbon dioxide and oxygen will need to be gassified [sic] though tanks into the engine. That powers the ship.” That’s much simpler than the Falcon 9 rocket’s system, which uses five ingredients: nitrogen, helium, carbon dioxide, hydrogen, and an ignition chemical. The team worked 7 days a week to get the tank done in time for IAC. Thus far, their efforts are paying off. “Initial tests look positive,” Musk said. “We haven’t seen any leaks.”

As encouraging as that is, the tank will still need to prove its reusability. “Spaceships last 30 years,” Musk explained. “They’ll take 12 to 15 flights at most, so we need to maximize the cargo and reuse the booster and tanker a lot.” The tanks will require between 3 and 5 trips filling trips from separate propellant tankers as the spaceship sits in orbit, waiting for the Mars rendezvous.

The next part of the ship SpaceX is working on is the rocket booster. The booster will act “like a javelin thrower,” Musk said, directing and accelerating the ship to 8,650 km/hour or 5,375 mph. Once it’s kicked the spaceship off towards Mars, it’ll come back to Earth in “20 minutes,” according to Musk.

The booster will be still be a “high-pressure turbo pump fed with cool proponent,” Musk said, but it’ll be simpler to build than the tanks because SpaceX is essentially scaling up their Falcon 9. The biggest difference is that it’ll be made of carbon fiber.

Remember, all of those pieces have to get back from Mars in order to make this plan feasible. Again, Musk’s solution is to build a propellant plant on Mars using methane as the ship’s primary fuel source. Here’s the breakdown of how that’s going to happen:

So now that we’ve seen the details of Musk’s 4-step plan to get people on Mars, the real question is how much will the whole system cost. Musk has a chart for that, too: 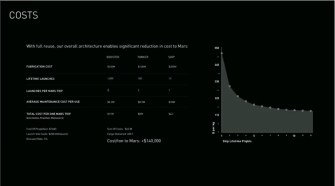 “That is quite expensive,” Musk admits. He expects to “generate decent cash flow from launching satellites” with SpaceX and also ferrying items to the International Space Station. There’s also private sector interest as well, prompting Musk to admit that he knows this project will ultimately be a huge public-private partnership. “As we show that this dream can be someday made real, the support will snowball over time.”

That support is likely, as Musk’s dream doesn’t end at Mars. He hopes his rocket system will take us even further than that. “We have the basic system,” he said, “provided we have filling stations along the way. That gives access to the greater solar system.” Musk theorized about visiting Saturn’s Enceladus moon, Jupiter’s Europa moon, and even past Pluto and into deep space. “We’d need a different system for interstellar journeys,” Musk admitted, but it’s in the back of his mind.

What the Mars rocket would look like on Europa. Credit: SpaceX/Flickr

Musk is so dedicated to the idea that “the main reason I’m personally accumulating assets is to fund this.”

SpaceX began in 2002 “with a carpet and a mariachi band,” as Musk put it. It’s now a pioneering space company at the forefront of technical innovation. It will find a way to make us a multiplanetary species. The only question is when. 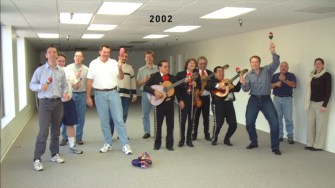 In case you thought he was kidding about the mariachi band. Credit: SpaceX

Related
Hard Science
Some earthquakes last for seconds, others for minutes — and a few for decades
What do you call it when the Earth shakes for three decades?
Sponsored
What childhood “money story” is shaping your financial behaviors?
Here are the signs that you inherited “money anxiety” from your parents.
The Present
The “maritime Indiana Jones” who salvages shipwrecks now wants to tow icebergs
Simple physics makes hauling vast ice chunks thousands of miles fiendishly difficult — but not impossible.
Neuropsych
Inside the brains of aging dogs
In a citizen science project, thousands of pet dogs are helping scientists to understand what happens to memory and cognition in old age.
Neuropsych
The most common source of awe might surprise you
It’s us.
Up Next
Surprising Science
As Opioid Deaths Soar, the DEA Stifles Alternate Remedies
More Americans now use opioids than tobacco, while pro-painkiller lobbies outspend opposition 200 to 1.