In a talk at the International Astronautical Congress in Adelaide, Australia, Elon Musk, the CEO of SpaceX, presented his new plans for the future of space exploration. SpaceX will eventually replace its whole current fleet of spacecrafts that include the Falcon 9, the Falcon Heavy and the Dragon with just one new vehicle – the cheekily codenamed BFR (“Big Fucking Rocket”).

Musk explained that the company’s strategy for building “a system that cannibalizes our own products” and makes them “redundant” lies in freeing up resources from other vehicles towards the BFR.

“All our resources will turn toward building BFR,” Musk said. “And we believe we can do this with the revenue we receive from launching satellites and servicing the space station.”

The BFR, as part of its Interplanetary Transport System, will be the focus for Space X. It will have 31 main engines and be 48 meters long, producing a liftoff thrust of 5400 tons that lifts a total vehicle mass of 4400 tons. It would be able to house about a 100 people on a trip to Mars and have up to 40 cabins, along with a spacious payload area. 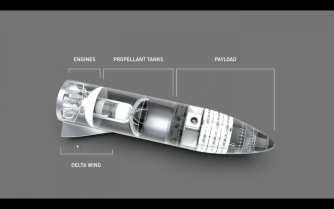 The BFR will make the company money for its loftier endeavors by launching satellites, transporting cargo to the ISS and helping with lunar missions as part of setting up a Moon base. This inclusion of the Moon may have connection to Musk’s contacts with the White House. Vice President Mike Pence, who is in charge of the National Space Council, expressed that the return to the Moon could be a possible new direction for the space program.Just recently, Russia and the U.S. agreed to cooperate on building the first lunar station.

How long will the new spacecraft take to build? Musk announced an “aspirational” timeline of launching first BFR cargo craft to Mars in 2022.

“That’s not a typo, although it is aspirational.” half-joked Musk. ”I feel fairly confident that we can complete the ship and be ready for a launch in about five years. Five years seems like a long time to me.”

You can watch the whole event here –

Related
The Present
How circular economics can make us happier and less stressed
Entrenched business wisdom says that community-led economic systems are pure fantasy. Douglas Rushkoff disagrees.
The mind-bending physics of time
How the Big Bang gave us time, explained by theoretical physicist.
▸
8 min
—
with
Sean Carroll
The Learning Curve
The art of asking the right questions
The right questions are those sparked from the joy of discovery.
Starts With A Bang
Ask Ethan: Do my atoms really “touch” each other?
When you bring two fingers together, you can feel them “touch” each other. But are your atoms really touching, and if so, how?
13.8
Why the origin of life and the Universe itself might be forever unknowable
There might be a hard limit to our knowledge of the Universe.
Up Next
Starts With A Bang
What The James Webb Space Telescope Will Do For Science
A new podcast tells the incredible tale of the next great leap into the Universe“And so far as I’m concerned, I’m not going to run a program that’s just a one-shot […]