Elon Musk told a crowd at South by Southwest on Sunday that SpaceX could be embarking on its first mission to Mars by as early as next year.

“We are building the first Mars, or interplanetary ship, and I think we’ll be able to do short trips, flights by first half of next year,” Musk said during his surprise talk in Austin, before cautioning: “Although sometimes, my timelines are a little, you know…”

In September 2017, SpaceX announced plans to send a cargo mission to the Red Planet by 2022, which would confirm water sources and install “initial power, mining, and life support infrastructure.” The company eventually wants to set up a long-term human colony on Mars.

SpaceX’s “Big Fucking Rocket” (BFR) would be the spacecraft for the journey. The nearly 350-foot rocket is reusable and would only cost the privately funded company about $7 million per launch. 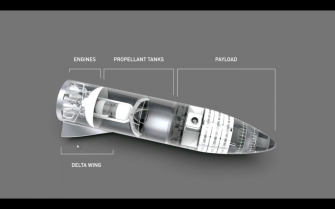 “The biggest thing that would be helpful is just general support and encouragement and goodwill. I think once we build it we’ll have a point of proof, something that other companies and countries can go and do. They certainly don’t think it’s possible, but if we do they’ll up their game.”

The focus of the first mission would be to set up basic infrastructure for a colony. But after that?

“… then really the explosion of entrepreneurial opportunity [will begin], because Mars will need everything from iron foundries to pizza joints,” Musk said.

But Musk’s talk wasn’t marked only by interstellar optimism. He spent much of the morning in Austin warning about the existential threats facing humanity.

“There’s likely to be another dark ages… particularly if there’s a third world war,” he said, adding how human settlements on other planets could basically serve as an insurance plan when catastrophe strikes on earth.

Musk also posed questions over the lack of A.I. regulation.

“Mark my words: A.I. is far more dangerous than nukes. So why do we have no regulatory oversight?”

To be sure, there were some lighter notes in his talk. Musk said he expects self-driving cars to be 200 percent safer than the ones we careen around in today. He also revealed that Kanye West was a source of inspiration for his ventures. Finally, Musk and his brother, who joined the space entrepreneur onstage near the end of the talk, capped things off by donning cowboy hats and dancing on stage.

They’re now going to sing along to the song from Three Amigos that Musk promised would happen on Twitter. “This is going to be terrible.” I don’t know what more to say! pic.twitter.com/9lCzopKb3r

Related
13.8
The weirdness of quantum mechanics forces scientists to confront philosophy
Though quantum mechanics is an incredibly successful theory, nobody knows what it means. Scientists now must confront its philosophical implications.
Neuropsych
Why is a Starbucks loyalty rewards program making customers so angry?
The rewards price to get a free cup of hot coffee at Starbucks is going up.
Empowering growth
7 essential management training topics for every team leader
From emotional intelligence to problem solving, these management training topics will set team leaders up for success.
Thinking
What if you could rewire your brain to conquer suffering? Buddhism says you can
For Buddhists, the “Four Noble Truths” offer a path to lasting happiness.
Hard Science
Solved: 500-year-old mystery about bubbles that puzzled Leonardo da Vinci
The solution involves the infamous Navier-Stokes equations, which are so difficult, there is a $1-million prize for solving them.
Up Next
Strange Maps
42 of the world’s 50 deadliest cities are in one region
Here’s why Latin American cities are the deadliest in the world.