Back in 2016, 61 people were killed in Los Cabos, a favorite holiday destination for Americans. The following year, 365 people were murdered in the city, a 500% increase over 2016. The Mexican municipality at the southern tip of the Baja California peninsula now officially is the deadliest city in the world.

With an average of one murder per day and a total population of just under 330,000, Los Cabos has a murder rate of 111.33 per 100,000 inhabitants—a fraction more than the 111.19 figure for Caracas, in second place. But the Venezuelan capital is much larger. With a population of just over three million, its (relative) murder rate translates into an (absolute) death toll of 3,387 murders last year, more than any other city on the list (which excludes combat zones like Syria or Yemen).

That list, of the world’s 50 most violent cities translates into this map. If it doesn’t much look like a world map, it’s because no less than 42 of those cities are in Latin America. Most of this are in Brazil—17, in all. Mexico has 12. Third in the country ranking is Venezuela, with five cities. Only eight cities are outside Ibero-America: four in the U.S. (St Louis, Baltimore, New Orleans and Detroit, in that order), three in South Africa (Cape Town, Durban and Nelson Mandela Bay—i.e. the Port Elizabeth area) and one in the Caribbean (Kingston, Jamaica). 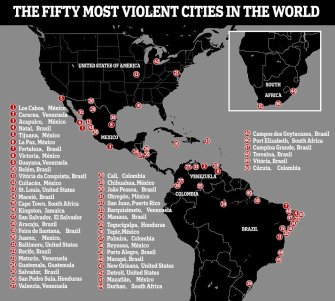 The annual ranking of the world’s deadliest major cities (with a population of at least 300,000) is the work of the Mexican anti-violence think tank Seguridad, Justicia y Paz, which draws three conclusions from the latest figures:

1 – Honduras is getting better

From 2011 to 2014, San Pedro Sula was the deadliest city in the world. In 2016, it was still ranked third. With the murder rate more than halving between 2016 and last year, it dropped to 26th place. Homicides in the Central District (the municipality that includes the country’s capital Tegucigalpa) dropped by almost 44%, leading to a drop from 4th place in 2016 to 35th place last year.

“These extraordinary reductions did not happen by chance,” the think tank says. “They are the Honduran government’s commendable efforts to systematically eradicate criminal cells, reduce judicial impunity and act against gang crimes other than homicides, as well as restoring order to the prison system.”

2 – Mexico is getting worse (again)

Things had gotten better in Mexico. In 2015, only five Mexican cities were included in the ranking. Now the figure is up to 12 again, the same number as in 2011. Things aren’t quite as bad as back then, when the homicide rate in Juarez approached 300, but the situation is definitely worsening.

Why? “The opposite has been done from Honduras: no action is undertaken to systematically eradicate the private militias of criminal groups. And judicial impunity has been allowed to reach its worst levels ever recorded.”

3 – Chaos in Venezuela leads to undercounting

The situation in Venezuela is so chaotic that it has become difficult to count the dead.

“The official data is scarcer, less periodic and less specific than in previous years. That is why we took two Venezuelan cities (Gran Barcelona and Cumana, Ed.) off the list. Also, with four million Venezuelans having left the country, population estimates no longer reflect reality, and homicide rates based on them should, in fact, be higher.”

For all 50 cities combined, the average homicide rate was 59.17 per 100,000 inhabitants, which translates to 41,430 intentional killings for a total of just over 70 million inhabitants.

The ‘deadliness’ of the rankings is relative. For instance, Los Cabos only ranks 31st in absolute terms. Of the 14 cities with more than 1,000 murders last year, no less than seven are Brazilian; two are in South Africa, and Tijuana is the only one in Mexico.

In the ‘relative’ ranking, five of the ten deadliest cities are Mexican. The uptick in killings in Mexico can be related to the fragmenting of criminal groups, leading to more intra-gang violence.

According to the think tank, the violence across Latin America has two common, related traits: it is driven by drug trafficking, and by the prevalence in organized crime gangs. Enabling the violent climate is a general backdrop of poverty, instability and corruption.

Related
The Present
How heat pumps of the 1800s are becoming the technology of the future
Innovative thinking has done away with problems that long dogged the electric devices — and both scientists and environmentalists are excited about the possibilities.
Starts With A Bang
JWST’s hunt for most distant galaxies gets double boost
Along with gravitational lensing and ALMA’s incredible long-wavelength spectroscopy, JWST is reshaping our view of the early Universe.
Thinking
Finding your essential self: the ancient philosophy of Zhuangzi explained
Adopting a healthy scepticism towards inherited ideas means “emptying the container of the Self.”
The Future
Startup’s bladeless flying car is designed to reach Mach 0.8
One of Jetoptera’s VTOLs is expected to reach speeds of around 614 mph, about as fast as a commercial jet airliner.
Health
New blood types are often discovered following medical disasters
New blood types are regularly discovered by an unusual absence or an unusual presence — both of which can result in tragedy.
Up Next
Starts With A Bang
The 5 Reasons To Keep Daylight Saving Time Have No Science To Back Them Up
For most of us, it’s something we just accept every year. But there’s arguably no good that comes from it.Every year on the second Sunday in March, most places in the […]