Napping is not the first piece of advice that came to mind when purchasing a ticket to listen to author Daniel Pink in conversation with neuroscientist Daniel Levitin. Yet two weeks ago I sat in a small Santa Monica theater listening to the men discuss the benefits of naps. Given the fact that both men are not that much older than me, I shook my head in agreement.

The men were discussing Pink’s latest book, When: The Scientific Secrets of Perfect Timing. Pink argues that we often ask why something did or did not work out, but rarely do we consider timing. Over the course of 218 pages, he makes a convincing argument. Along with two research assistants, he pored over 700 clinical studies to discover a common trend: the midday trough is not an optimal time to handle serious work.

Pink divides humans into three camps: larks, which make up 14 percent of the population; owls, 21 percent; and third birds, 65 percent. This he measured by the average midpoint of sleep. The predominant number of people hit their midpoint around 4 am, making them third birds.

From these data, Pink devised a schedule: do your analytic tasks in the morning and insight tasks later in the afternoon and evening. And do not perform either during midday. That’s the time for administrative work, tasks not requiring creative problem solving or deep insights. While exact times vary from person to person, Pink’s outlook is based on circadian rhythms, which affect us to a degree few recognize.

Which is why Pink is now an advocate for napping, what he calls “Zambonis for our brains.” A former nap skeptic, he now believes that naps “smooth out the nicks, scuffs, and scratches a typical day has left on our mental ice.” Among the studies he covers:

Duration matters. The ideal nap is 10 to 20 minutes long. After 20, sleep inertia sets in—you wake up groggy and confused. Hit an hour and your recovery time will be like waking up from a long slumber.

Interestingly, there’s even a coffee nap hack. I’ve done this inadvertently and can anecdotally confirm its benefits. Since caffeine takes 25 minutes to enter your bloodstream, drinking coffee and then taking a 20-minute nap—Pink calls it a “nappuccino”—lets you get the nap boost and the coffee lift. This technique has been shown to reduce sleepiness and improve performance.

Pink concludes by calling for a return to the siesta. In an attempt to compete with other nations, Spain eliminated it a decade ago. In some ways, Pink’s entire book can be summed up in this example: by trying to improve performance, the government took the exact opposite route to achieving such. Instead of pulling other nations to their side, Spain abandoned a longtime practice with a positive track record. 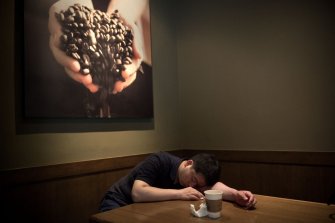 A man takes a nap after drinking a coffee inside a Starbucks in Beijing on June 28, 2017. (Photo by Nicolas Asfouri/AFP/Getty Images)

Pink reminds us of our own cultural attitude. At the time when Spain was eliminating sanctioned midday rest, Americans boasted about getting by on only four hours sleep. Then a library’s worth of research on sleep was published. We went from calling that person a hero to a fool. Instead of getting work done, he was likely performing at a subpar level while risking the safety of others.

We are in need of many shifts. For all the accolades we award ourselves for technological innovation, we’ve taken a dozen backward in our diets, movement patterns, social relationships, and sleep. Churning out content and pushing files across networks does not make for a fulfilling life. Living a healthy life means we’re imbued with a sense of meaning, which is hard to feel when constantly exhausted.

As with most things, humans are more reactive than proactive. We don’t change our diets until organs fail. We don’t exercise until our body feels so foreign that we realize we have no clue how to control our limbs. And we don’t sleep until unconscious processes are so compromised that our body rebels in the form of disease and discomfort. Even then we still refuse, so deeply embedded are habits of behavior, no matter how toxic.

Which is a shame. A healthy mind and a healthy body are not separate processes. They’re part of the same phenomenon—the process of being. We might bathe ourselves in electric light late into the night and think it an advance, but there’s a quarter-million years of evolutionary history that put us to sleep when the sun set and woke us up on its return. The midday sun was the worst, so our ancestors took cover and… napped. We can fight history but we can’t escape it. It made us. Honoring that rhythm is only to our benefit.

Related
3 game theory tactics, explained
How to maximize wins and minimize losses, explained by four experts on game theory.
▸
7 min
—
with
Kevin Zollman
Health
When’s the best time to consume caffeine? Hint: Not right after you wake
Get the most out of your coffee.
Starts With A Bang
The quantum reason why neutral atoms first formed
If it weren’t for the intricate rules of quantum physics, we wouldn’t have formed neutral atoms “only” ~380,000 years after the Big Bang.
Hard Science
Some earthquakes last for seconds, others for minutes — and a few for decades
What do you call it when the Earth shakes for three decades?
Sponsored
What childhood “money story” is shaping your financial behaviors?
Here are the signs that you inherited “money anxiety” from your parents.
Up Next
Culture & Religion
How the god you worship influences the ghosts you see
People across eras, religions, and cultures have always been curious about a spiritual world that exists behind the curtain of death.