According to the International Coffee Organization (ICO), the world pours about 1.4 billion cups of coffee per day. This might explain why you rely so heavily on your Keurig every morning or why you stop at Starbucks on the way to work even though you’re already running late.

How does your morning coffee really impact your brain? Most importantly, are there certain times of the day where your latte-caffeine boost is better for your health?

Your Brain On Coffee

Your brain on coffee

Caffeine, the main stimulant in coffee, works on a chemical level to give you a boost of energy. However, caffeine is structurally similar to another chemical naturally created in the body, called adenosine, which makes you tired.

Some substances imitate natural neurotransmitters and can take their place in receptors. For example, morphine can bind to the receptors in the brain meant for your endorphins (which is a natural kind of ‘morphine’ produced by your brain).

Caffeine replaces adenosine, which builds your adrenaline and causes dopamine to linger longer.

Similar to how morphine binds to endorphin receptors, the caffeine in your morning coffee binds to your brain’s adenosine receptors, preventing the biochemical from making you tired.

This lingering of dopamine is what often triggers the brain to crave more caffeine. After all, while dopamine itself isn’t inherently addictive, it does play a large role in many addictions.

The brain is a complex and intricate system. The more coffee you drink, the more adenosine receptors are formed, meaning it can take more coffee to keep you awake now than it did when you started drinking coffee as a young adult.

According toresearch, caffeine has a half-life of around 6 hours.

Within the first 10 minutes, the caffeine enters your bloodstream and is pumped throughout your body, causing an increase in blood pressure and heart rate.

Up to 20 minutes after intake, caffeine binds to the adenosine receptors, neutralizing fatigue. Dopamine levels increase and linger, which provides the drinker with an alert and focused feeling.

Within 30 minutes, your adrenal glands shift into high gear and begin producing more hormones. During this time your vision may become sharper due to your pupils dilating.

Within 40 minutes, your body begins producing more serotonin, which improves the neuron function within your spinal cord – this leads to improved coordination and muscle strength.

After 4 hours, your metabolism increases, which is why you burn energy faster. Your body begins to break down stored fats during this time.

Within 6 hours, the liquid coffee has gone through your system and you will likely feel the urge to urinate, during which time approximately half the caffeine you consumed is expelled. 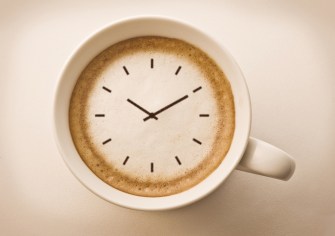 What time of day you drink your coffee can mean the difference between a good habit and a bad habit.

Photo by bluehand on Shutterstock

How to make your coffee habit benefit you

Of course, with anything caffeinated, moderation is key. When consumed in excess, caffeine can cause anxiety, heart palpitations, and sleeping problems.

According to Consumer Reports, up to 400mg of caffeine per day (which equals two to four 8 ounce cups) can be part of a healthy diet, however anything over 600mg per day is too much.

What are the health benefits of coffee?

Despite what you may have been told, there are several ways your daily caffeine intake is good for you. Not only can coffee improve your energy levels, but it can cause your brain to function at optimal levels, making you smarter.

Some other health benefits of coffee include:

Cortisol, a naturally-occurring stress hormone, has a very distinct circadian rhythm that is regulated by the brain’s central pacemaker. Interrupting this rhythm can lead to metabolic abnormalities, fatigue, and poor quality of life, according to a 2009 study published in the Journal of Clinical Endocrinology and Metabolism.

Consuming caffeine when your cortisol levels are at a natural peak can lead to interference in the production of cortisol and an increase in your tolerance, which can impact your response to stress and will cause to you need more and more caffeine as time goes on.

When is the best time to drink coffee?

The cortisol levels in your body are at a natural peak three times per day, one of which is in the early morning. According to this article in Time Magazine, the best times to drink coffee (or ingest caffeine) are between 10 in the morning and 12 noon, and then again between 2 in the afternoon and 5 in the evening.

This will allow your brain to make the most of your caffeine surge, as it’s not replacing any other important functions, such as the cortisol release that naturally happens several times per day.

The development of the revolutionary gene-engineering tool CRISPR is a tale fit for the big screen.
Neuropsych

"Theory of mind" enables all people to naturally infer other people's mental states. Psychopaths don't seem to put much effort into the process.
Health

When Tal Golesworthy was told he was at risk of his aorta bursting, he wasn’t impressed with the surgery on offer – so he came up with his own idea.
Up Next
The Present

Today is the 50th anniversary of the Kent State shooting. Here’s what happened.

On May 4, 1970, the National Guard shot and killed four students during an anti-war protest. The massacre went on to change American culture forever.