Bees produce honey, beeswax, and… maps? Yes they do, if they’re one of Ren Ri’s swarms. Since he started beekeeping in 2006, the Beijing-based artist has learned to marry the organic industriousness of his apian collectives with the studied artifice of his own, human designs. The resulting structures exude an eerie menace by their unexpected intentionality. 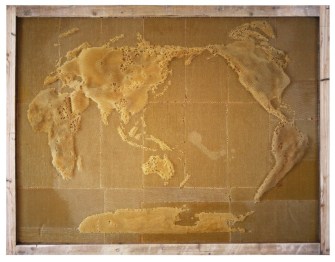 Ren Ri calls them yuansu, a combination of yuan (“nature” or “element”) and su (“restriction,” “mold”). Together, that would be something like “an original artifice,” or, in art gallery speak, “a comprehension of the gestalt of life.” 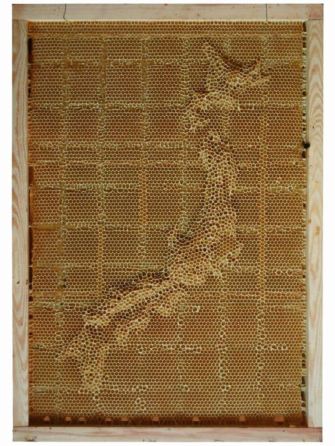 In the third of his yuansu projects, Ren Ri himself is the canvas, allowing himself to be covered and stung by a great number of bees. For Yuansu II, he put the queen bee in the middle of an acrylic box, modifying the honeycomb structure the worker bees built around her by changing the position. He did this every seven days — a reference to Genesis — and by throwing dice — an ironic rebuke of that famous Einstein quote [1]. 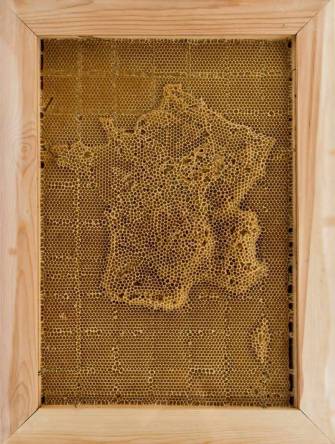 The oldest project, Yuansu I  — The Origin of Geometry (2007-2011) consists of a series of beeswax maps. Ren Ri created these by making molds of the world and of various individual countries, placing them in the beehives. Upon removal a few months later, they revealed the honey-flavored topographies shown here. 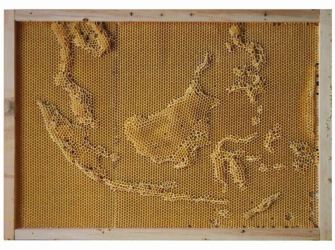 The press release for one of Ren Ri’s recent exhibitions, at the Pearl Lam Galleries in Hong Kong, states that “The artist believes his sculptures represent the truth of how humans interact with nature, which involves harmony, destruction, molding, and interference, and can result in unpredictable, sometimes volatile, but sometimes wondrous results.” 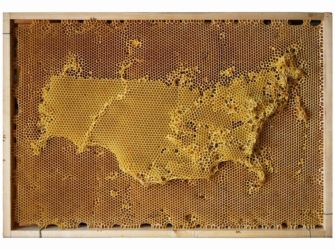 On Bored Panda, Ren Ri explains his interest in bees from childhood experience: “The house I lived in was located on a hill on the campus of Wuhan University. In the woods behind the house, there were honeycombs. Every day, I observed those busy bees from a distance, but they seemed not to notice my existence. It was as if the little creatures only cared about their relationship with nature.” 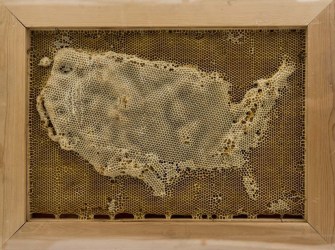 “As an artist, I realized that bees can create more mysterious sculptures than I could, so I began to abandon imaginative shapes, forms, and images and attempted to return to more purified state. Now I spend almost 70 percent of my day with bees. Not only have I gained some knowledge of the activities and habits of these creatures, but the bees themselves also get familiar with me after this day-to-day interaction.” 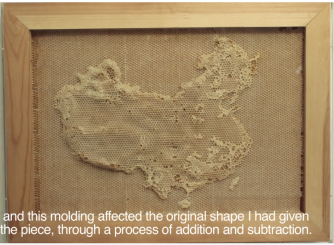 Ren Ri’s bees are not the only animals dabbling in cartography. As experiments have shown, slime mold is pretty good at recreating transport networks on maps of various countries (see #558). 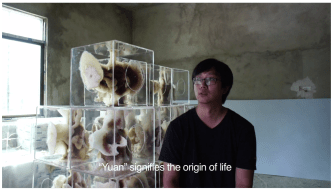 Many thanks to Tony Pappas, who sent in this link at the fantastic Flowing Data blog. More here on Ren Ri’s exhibition at the Pearl Lam Galleries. The artist explains his work in his own words here on Bored Panda, and here on Vimeo. Images 1 to 5 taken from this page at Distractify. Image 6 taken here from The Creators Project. Images 7 and 8 from the Vimeo video.

[1] Albert Einstein said that “God does not play dice with the universe,” thereby registering his disapproval of Heisenberg’s Uncertainty Principle. This states that the more accurately you try to measure the position of a particle, the less accurate will be your measurement of its speed, and vice versa – the implication being that the universe in essence is random and unpredictable. Einstein’s attitude could be summarised as the “hidden variable theory”: The universe is predictable; we just don’t know all the variables.

The astrophysicist Stephen Hawking objects: He claims that “even God is bound by the Uncertainty Principle, and can not know both the position, and the speed, of a particle. So God does play dice with the universe. All the evidence points to him being an inveterate gambler.” It seems at least one Chinese beekeeper/artist agrees.

Most “irrecoverable carbon” is concentrated in these tiny bits of the Earth’s land mass. Can we keep it there?
Up Next
Technology & Innovation

After 1.8 million miles, Google’s self-driving car has been involved in only 13 accidents — all of which were caused by the other car.