Amid vagabonding taco trucks and art galleries, in Miami’s sunny art district, Wynwood, there are blocks and blocks of mural-embossed buildings. It’s a neighborhood with fantastic imagery only limited to an artist’s imagination. It’s also a community that is using technology in an unprecedented way to engage smartphone-distracted passersby.

Indeed, it’s here, among walls that have borne murals of Yoda wielding a “Stop Wars” sign and an elephant with a swaying bouquet of tentacle-like trunks, that a curious new spray-painted mural has been beguiling locals and visitors alike for months. If Miami creatives are right, then this particular work, by street artist Eduardo Kobra, is one of the first fruits of a revolution about to take the art world by storm. 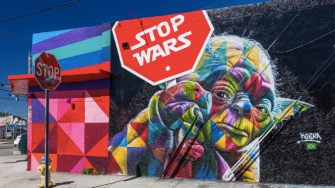 Fittingly, one of the subjects of the massive mural, emblazoned on the exterior of a restaurant named R House, is Salvador Dali. With a surprised gaze, the surrealist looks on with a rainbow-checkered pattern across his face. The mural already looks bold and vibrant, much like the other works across the neighborhood. It’s not like every other mural, though. When an in-the-know passerby points their smartphone to the work the image becomes animated via augmented reality.

On the phone’s screen, the colorful blocks begin to be swept away, as though by the wind, revealing a black-and-white checkered underlayer. It’s in this grayscale scene that a butterfly with ultraviolet wings flits and rests on Dali’s cheek, sending his eyes into rolling excitement. To the naked eye, the mural is static, immutable, but with AR the image is placed within a dynamic scene.

South Florida-based artists, such as Luis Valle, who has spraypainted murals across Miami, say this particular intersection of technology and art is thrilling. Valle believes AR will help creatives better connect their work with onlookers because of its ability to make art more evocative.

“The technology is brand new and only the beginning. What we can do with it is only limited to what we can think up,” Valle tells Big Think. “It definitely does enliven the art experience. Everyone has a smartphone these days and with AR you can add many added elements to an art piece. You can add sound, motion and 3D elements to the experience, which affects more of your senses.”

Dubbed ‘ARt’, pieces where augmented reality and art converge aren’t just bringing passersby together in wide-eyed clusters, they’re also bringing artists closer to their tech-savvy counterparts. For instance, when Valle decided to make new business cards, he collaborated with the AR team that brought Kobra’s mural into motion, Mussa. The result? Cards and promotional posters that, when viewed on the company’s app, conjure up one of Valle’s characters, El Shamansito—a skull-faced demigod, of sorts.

“So far my experience has been with my logo and character, El Shamansito,” Valle says. “With this, I worked with the AR team as far as telling them what I would like to see happen with my character as it comes out of my logo. We talked about motion and sound, as well as effects. Then there was the actual modeling part. I had to work with them by showing 2D samples of the character so that the 3D graphics team could turn the character into a 3D model with animation around. There were a few modifications and adjustments but we got to a place where we felt pleased with the results.” 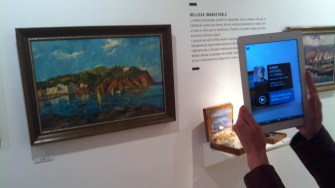 Augmented reality at Museu de Mataró, an example of how AR can enhance the museum experience. (Wikimedia Commons)

As the collaboration process becomes increasingly streamlined, ARt may begin to pop up, en masse, in other cities across the United States—and the world. Not just in New York galleries and trendy events such as Art Basel, but just like Pokémon gave people the motivation to traverse their hometowns, and discover new spots, ARt is expected to give people an initiative to discover what dynamic visuals the street art in their neighborhoods may be quietly hiding.

“The technology is poised to become an integral aspect of how we interact with our environment, and allows us to connect individuals with their communities through AR experiences created around public art,” says Leon Posada, who co-founded Mussa two years ago with his friend Ignacio Montes. “The technology has the potential to turn individuals from passive observers to active participants.”

However, there are still some criticisms of the emerging technology’s liaison with art. Shoshana Resnikoff, curator of Miami Beach’s Wolfsonian-FIU Museum, believes augmented reality’s success in the art world depends on whether the experiences arouse people’s interest in the world around them.

“I’m definitely intrigued by the potential of AR to reach people who are otherwise engaged in their phones, but it’s also important to remember that one of the most valuable aspects of art is its ability to pull us away from our daily distractions and get us looking and thinking differently about the world around us,” Resnikoff tells Big Think. “Experiencing the art itself through the phone may or may not impact that—it’s all about how it’s implemented.”

This said, Resnikoff foresees a future in which fine ARt—as opposed to visual gimmicks—will be a supplement to in-depth art interpretation rather than a replacement of it. “When applied thoughtfully, AR can provide valuable context to art and objects in a gallery environment or a public space, helping visitors to understand art experientially, not just through a static viewing experience,” she says.

So long as the augmented reality component remains thoughtful, centered on expanding a work’s experience, then ARt may literally change how we view and experience art. The ultimate goal? Getting people excited about checking out museums, galleries, and their neighborhood streets. “Now that artists are integrating new technologies like AR and VR into their work,” says Posada, “the sky is the limit as to how far we can go as an art community.”

A conservator from the Rijksmuseum explains how to confirm whether a painting is a genuine Rembrandt.
Up Next
Politics & Current Affairs

6 revelations from Facebook’s 500-page response to the U.S. Senate

In about 500 pages of documents, Facebook responded to questions from U.S. senators about privacy, monopoly, and political discourse on the world’s largest social media platform.