“[H]e offers you a shiver down your spine/ or: a longing, to see your loneliness,” Danish poet Naja Marie Aidt wrote of her countryman Vilhelm Hammershøi’s art in 2012. “He offers you recognition of something — calm, silence, something very subdued — cool that isn’t cold.” A realist painter (albeit an odd one), Hammershøi’s international fame at the time of his death in 1916 disappeared under the barrage of unrealistic modern art until its resurrection in the early 1980s. A new exhibition of Hammershøi’s art continues this rediscovery of a painter of cool, tranquil interiors that are nonetheless unsettling — all without being cold and distancing. Such art makes Hammershøi the most influential modern artist you’ve never heard of. 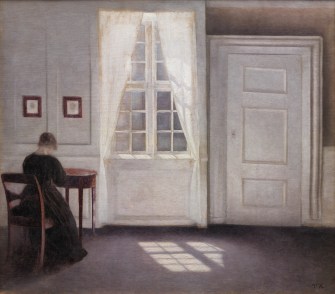 Painting Tranquility: Masterworks by Vilhelm Hammershøi from SMK – The National Gallery of Denmark at the Scandinavia House: The Nordic Center in America, the first exhibition in New York exclusively dedicated to Hammershøi’s work in over 15 years, features 24 works from the Danish Statens Museum for Kunst (SMK) that cover all of Hammershøi’s greatest hits, or at least his favorite subjects.  “Classic” Hammershøi — the Hammershøi the general public knows, if at all — are the still, silent, almost eerie interiors such as Interior in Strandgade, Sunlight on the Floor (shown above). At first glance it seems a modernized Johannes Vermeer, but upon closer inspection, the cool, in contrast to Vermeer’s warmth, settles in.

Dr. Kasper Monrad, chief curator at the Statens Museum for Kunst, explains the nature of Hammershøi’s temperature change in the catalog. Like other realists in the Danish tradition, “Hammershøi chose similarly mundane, everyday-like scenes as his subject matter,” Monrad writes. “However, he abolished any type of narrative or action in the painting, preferring to freeze time instead.” Interior in Strandgade, Sunlight on the Floor features a seated woman on the left, but, unlike Vermeer’s women, we know nothing about what she’s doing.

Rather than reading a letter, playing an instrument, pouring milk, or simply meeting our eyes with her own, Hammershøi’s woman, Monrad explains, “is caught in a state of stasis, all movement suspended; she will never complete her action. The space is entirely bare and indeterminate, and we get no impression of the woman’s life world at all.” Whereas Vermeer provides the warmth of human narrative, Hammershøi cooly denies us that narrative, but comes short of total coldness by giving us the setting of human interaction. Like John Keats’ “Ode on a Grecian Urn,” Hammershøi’s peopled interiors “tease us out of thought/As doth eternity.” Hammershøi’s refusal to give us the obvious clues to the obvious answers teases us in a fascinating, addictive way that adds a modernist twist to familiar scenes. 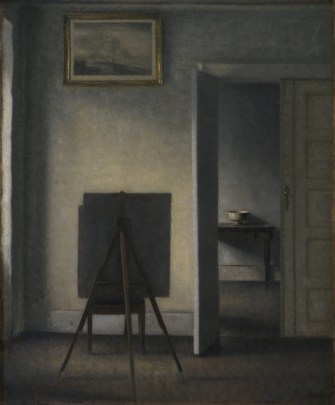 Even more unsettling than Hammershøi’s populated interiors are the unpopulated ones, such as Interior with the Artist’s Easel (shown above). Here, Hammershøi plays with the classic trope of an artist painting his profession. “However,” as Monrad points out, “the painter himself is absent, and the easel has been placed so that we only see the back of the painting. Thus, the theme that is hinted at remains vague, entirely shorn of any of the narratives traditionally associated with such motifs.” In fact, as Monrad comments, the place of honor usually reserved for the artist is taken by the light streaming through the window, as if Hammershøi humbly credits light itself (rather than his talents) as the true source of his art.

Similarly, in Interior. Artificial Light (shown at top of post), we see chairs gathered around a table illuminated by two candles. Who lit those candles and why is never explained. Instead, “Hammershøi has entirely revoked their usual function, i.e., to act as a setting and backdrop for human interaction,” Monrad explains. Monrad goes on to suggest that Hammershøi framed this mystery in “an oval shape, as if it were observed in a mirror.” If mirrors reflect reality, Monrad concludes, therefore, “Hammershøi’s ‘reality’ is a room devoid of people.” This modern alienation from others and even self so frequently found in Surrealist art and other modern movements finds a different approach in Hammershøi that influenced American artists known for their “different” flavors of realism from Edward Hopper to Andrew Wyeth. Yet neither Hopper nor Wyeth managed the magic trick of total disengagement with narrative that Hammershøi pulled off. 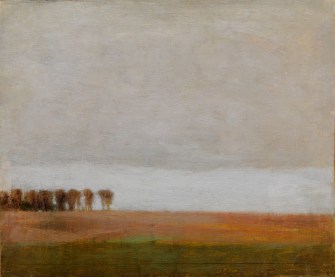 Painting Tranquility excels in bringing us the whole Hammershøi and not just the master of the near-Hitchcock-ian interior. In View of Jægersborg Allé. Gentofte, North of Copenhagen (shown above), Hammershøi gives us the classic landscape, but not really. Rather than Romanticized, wild, unblemished nature, Hammershøi “always painted near settled areas, showing places where human activity was frequent — and yet the scenes never include human figures,” Monrad writes. Just as we can never truly connect with the inner life of a painted figure, we can never get back to the Edenic garden of nature. Hammershøi refuses to perpetuate the lies he saw in narrative paintings of any genre, choosing instead to deconstruct how those lies are made and shared. Rather than the Impressionist field of flowers that seem to speak to us, View of Jægersborg Allé. Gentofte, North of Copenhagen gives us only the silent, clear, godless sky. For Americans, Painting Tranquility: Masterworks by Vilhelm Hammershøi from SMK – The National Gallery of Denmark provides the perfect opportunity to discover and appreciate Vilhelm Hammershøi, who seems amazingly modern and present to our present-day alienation for someone dead for nearly a century. Yet, we want to look at works such as Self-Portrait. The Cottage Spurveskjul at Sorgenfri, North of Copenhagen (shown above) and think we know Hammershøi, but not knowing Hammershøi is the only way to “know” Hammershøi. In this Self-Portrait, painted in 1911, when he may have felt the first effects of the cancer that would take his life five years later, he places himself on one side counterbalanced by an open door on the other, as if he is equivalent to an “open door.” Yet, he denies us the view beyond that door. What we find beyond that door is up to us, Hammershøi may be hinting. All Hammershøi offers is the open door itself. It’s that cool world of possibility that makes Hammershøi the “cool” choice for a new generation.

[Many thanks to Scandinavia House: The Nordic Center in America in New York City for providing me with the images above, a review copy of the catalog to, and other press materials for the exhibition Painting Tranquility: Masterworks by Vilhelm Hammershøi from SMK – The National Gallery of Denmark, which runs from October 17, 2015, through February 27, 2016.]

Related
Starts With A Bang
Ask Ethan: What are white holes, and do they really exist?
In General Relativity, white holes are just as mathematically plausible as black holes. Black holes are real; what about white holes?
Life
Strange life forms create an “alien” ecosystem in an abandoned uranium mine
Slimy biofilms made up of bacterial and eukaryotic life forms have taken over an abandoned, flooded uranium mine in Germany.
Hard Science
Earth has an eerie “sodium glow,” and astronomers use it to image stars
Air currents in our atmosphere limit the resolving power of giant telescopes, but computers and artificial stars can sharpen the blur.
Health
How saliva changes the flavor of food
“It’s a liquid, but it’s not just a liquid.”
High Culture
Why are flood myths so common in stories from ancient cultures around the world?
Could the prevalence of flood myths around the world tell us something about early human migration or even the way our brains work?
Up Next
Culture & Religion
Genius or Crazy? Pangaea Reborn
In order to bring conflicting countries closer together mentally, experimental philosopher Jonathon Keats wants to bring them closer together physically. He proposes action that would speed up Earth’s tectonic activity and lead to the rapid formation of a new supercontinent.