Many non-locals will be surprised to learn that San José is the largest city in the Bay Area (having surpassed San Francisco in the 1980s). Another lesser-known fact is that a map of the entire Bay Area can be created using nothing more than two functioning, interlocking hands (preferably your own). 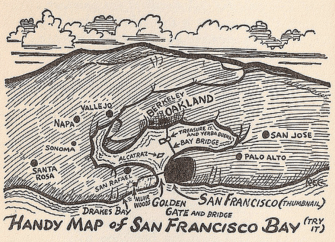 This ‘Handy Map of San Francisco’ does not say why or whether it is absolutely necessary to paint your right thumbnail black to create the effect of San Francisco. For other manual maps, see also Michigan (#454) and Santa Cruz (#512).

Many thanks to Adam Koford for sending in this map, found in a 1938 Cartoon Guide to California by Reg Manning.