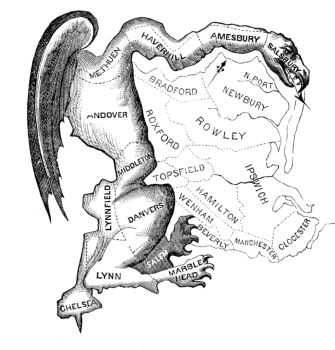 The original cartoon of the ‘Gerry-Mander’, published in 1812 in the Boston Centinel.Image: Elkanah Tisdale (1771-1835), Public Domain.

One way for a political party to manipulate the outcome of elections is to ‘gerrymander’ electoral districts: manipulate their boundaries to increase the likelihood of a favorable outcome (see also #53).

The term is almost as old as the United States itself, and the practice continues to disfigure the electoral map to this day. Perhaps these maps can serve as the inspiration for a radical solution.

They show the contiguous United States (i.e. without Alaska and Hawaii) sliced latitudinally and longitudinally into ten straight-bordered bands of varying size, so that each contains exactly 10 percent of the population.

Although certainly not intended as a reflection on electoral redistricting, it’s tempting to see these sweeping re-alignments of the U.S. as a suggestion with some potential in that direction. 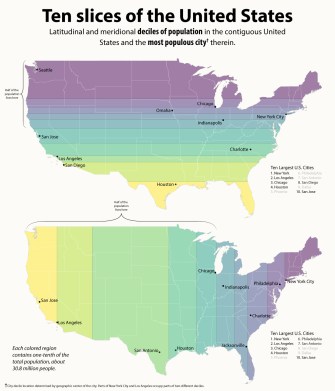 Reddit user curiouskip used U.S. Census population data to divide the ‘Lower 48’ into deciles (ten equal parts), each representing about 30.8 million people. Each decile is consigned its most populous city as ‘capital’.

Looking at the top map, which divides the U.S. into 10 longitudinal strips, we see

The bottom map shows the U.S. divided latitudinally into 10 bands of equal population.

Redistricting a country into zones of equal population – and that being your only criterium – will create districts that are randomly diverse, and perhaps also, at least in this case, unmanageably large.

However, mixing up the political map with a bunch of straight lines as the only instrument is something that has been considered before. Usually, the objective is the wholesale removal of age-old divisions. 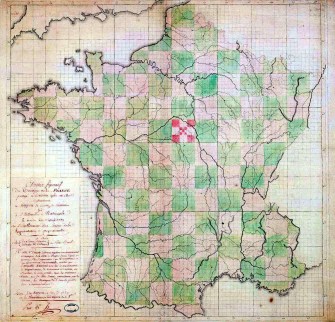 In 1790, the French revolutionary Jacques-Guillaume Thouret proposed doing away with France’s old provinces by replacing them with about 80 perfectly square departments. The plan lost its main proponent when Thouret lost his head during the Reign of Terror in 1794 (see also #159). 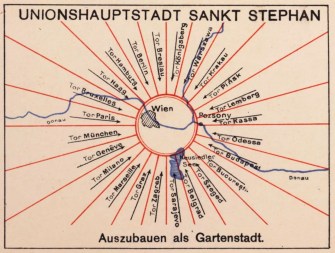 And in 1920, an anonymous author – possibly the Austrian P.A. Maas – proposed slicing up Post-World-War-I Europe as a pie, into 24 slices that would center on Vienna’s St. Stephen’s Cathedral. Each of those slices would be made up of a wide and random variety of linguistic, ethnic, and religious groups – and that would be the point: the better to unite them all into one massive superstate (see also #851).

Needless to say, both plans never left the drawing board. Would a proposal for the longitudinal and/or latitudinal redistricting of the U.S. have more traction? 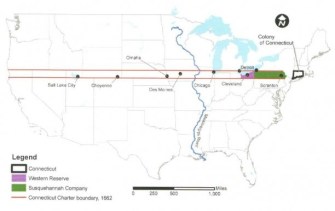 Putting the ‘connect’ into Connecticut: the Nutmeg State extending from the Pacific to the Atlantic. Image: Connecticuthistory.org

Well, for one, coast-to-coast polities have some pedigree in America’s past: some of the first colonies had claims that extended from the Atlantic all the way to the Pacific.

If history had gone entirely the way Connecticut would have wanted, the state would include such inland cities as Detroit, Chicago, and Salt Lake City, and extended to what is now the northern part of California.

Is such geopolitical weirdness reasonable or feasible today? Absolutely not. But in its randomness, would it be it as unfair as gerrymandering?

Like Dua Lipa, he had to create new rules.
Up Next
Life