The idea of freedom is central in the founding philosophy of the United States. It’s also the focus of many of the nation’s most cherished speeches like the oration given by one of its founding fathers, the attorney Patrick Henry on March 20th, 1775, to the delegates of the Second Virginia Convention, which ended with the declaration “give me liberty or give me death!” in what was to become the war cry of the American Revolution.

The coronavirus pandemic that has stricken contemporary America makes the choice for some just as stark. The tension between freedom and the measures necessary to stop the spread of a deadly disease lays bare the basic conflict in the country’s DNA. With the United States becoming by far the global epicenter of the disease, the virus directly assaults what it means to be free in this modern age, when the rights of one are confronted with the welfare of many.

The powerful choice posed by Henry propelled Virginia to contribute troops to the rebellion, fueling the Revolution. Choosing freedom has been paramount to the country’s governance since. It is part of the cultural fabric of the society, with the notion of “freedom” celebrated in its mythology, books, movies and art, even if it has clearly become more nebulous over time. 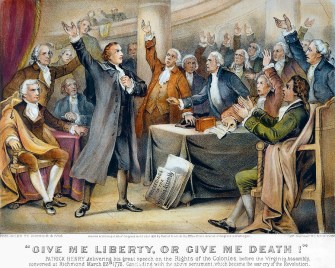 Henry’s speech was a list of grievances against the “tyrannical” power abuses of the British, likening the situation to slavery, and proclaiming the inevitability of war, which he called “the last arguments to which kings resort.” The fear of losing control to a dictatorial government are key to the country’s psyche and have certainly resurfaced due to the restrictions imposed upon the United States due to the coronavirus, sparking spreading paranoia that liberty is being lost.

A slew of right-wing politicians have been raising alarms about big government trampling on their rights by closing down churches, gun stores and preventing people from doing as they please. This harkens to the long-held conspiracy theory of the government wanting to use a national emergency to take over people’s freedoms. Of course, the measures taken were intended to stop the spread of the pandemic, have been shown to work, and were advised by health professionals.

Nonetheless, the idea of overreaching government has been a concern for people like State Rep. Heather Scott from northern Idaho, who called the government’s policy on stopping the virus “a way to chip away at the foundations of our Constitution to push a global, socialistic agenda while in the midst of a national emergency.” 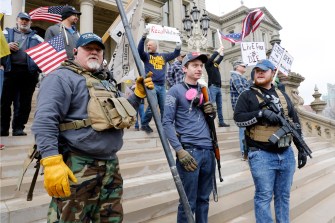 People take part in a protest for “Michiganders Against Excessive Quarantine” at the Michigan State Capitol in Lansing, Michigan on April 15, 2020.

Thousands of cars participated in an anti-quarantine rally in Michigan, protesting against the restrictions imposed by the governor. Elsewhere, some experts have warned about the use of police or National Guard to set up checkpoints in places like Texas and Florida as possibly unconstitutional and certainly not something you would ever see in America. Of special concern is impeding movement by license plates, singling people out by states of residence, rather than posing the same requirements for all people traveling from the same direction.

The virus has also produced the need to keep track of the people who’ve been infected, in order to slow the spread. This has led to concerns that the gathered data about the patient’s health and location could violate people’s privacy and, while useful now, could be used eventually as another tool of governmental control and surveillance.

More elaborate fears of this nature lead to veritable conspiracy theories, with people burning down 5G cellphone towers which they blame for causing the virus – a misinformation theory that is possibly spread by a foreign state, as has been recently reported. 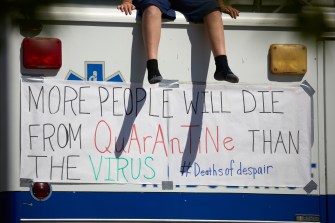 Another such “government control” proposal, spread by none other than the provocateur and President Trump’s adviser Roger Stone, maintains that Bill Gates created the coronavirus so he and his “globalist” friends can institute mandatory vaccinations and microchip people (to presumably then exercise some measure of ruling over their lives).

All such attitudes are certainly to be expected in a dreadfully divided country under the leadership of a President with a media aversion and his own definitions of what constitutes truthful facts. But for the United States, which has about a third of the global pandemic’s infected (while being just 4% of its population), with a deathly rate that doubled in the past week, the conflict playing out in its psyche may be just a false dichotomy that can lead to an existential disaster.

You can read the full text of Patrick Henry’s speech here.

Orson Welles Patrick Henry Give Me Liberty Or Give Me Death

Hear Orson Welles read “Give me liberty or give me death”

Geopolitics is not a magic 8-ball. But making financial decisions — such as those regarding retirement — in a multipolar world without geopolitics is akin to flying blind in a storm.
The Past

Was there an intelligent, technologically advanced species long before humans existed? Could there have been a dinosaur civilization?
Up Next
The Present

Colleges and universities can continue to ignore what the market wants, or they can get in the game and differentiate with new on-ground and online pathways to employment-centric education.