If more proof were needed that the U.S. is two nations in one, it was offered by the recent mid-term elections. Democrats swept the House, but Republicans managed to increase their Senate majority. There is less middle ground, and less appetite for compromise, than ever.

To oversimplify America’s electoral divide: Democrats win votes in urban, coastal areas; Republicans gain seats in the rural middle of the country. Those opposing blocs have consolidated into ‘red’ and ‘blue’ states decades ago.

Occasionally, and often after tight-run presidential elections, that divide is translated into a cartographic meme that reflects the state of the nation. 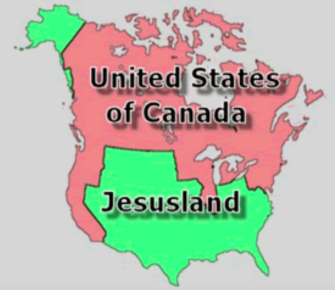 Jesusland vs. the U.S. of Canada

In 2004, this cartoon saw the states that had voted for Democratic presidential candidate John F. Kerry join America’s northern neighbor to form the United States of Canada. The states re-electing George W. Bush were dubbed Jesusland. 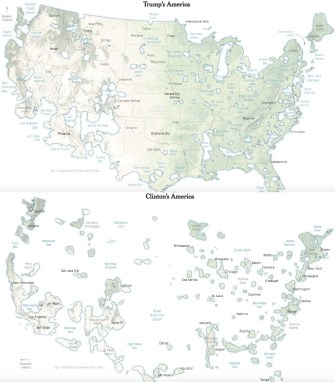 Trumpistan is a perforated continent, Clintonesia is a disjointed archipelago.

In 2016, these two maps disassembled the U.S. into Trumpistan, a vast, largely empty and severely punctuated land mass; and Clintonesia, a much smaller but more densely populated archipelago whose biggest bits of dry land were at the edges, with a huge, empty sea in the middle. 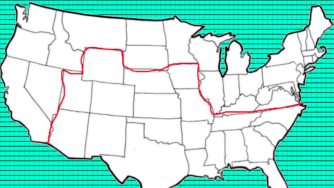 Following state borders, a line separates ‘red’ America (in the south) from the ‘blue’ half of the country.

Soyland vs. the FSA

Writing in The Federalist, Jesse Kelly in April this year likened America to a couple that can’t stop fighting and should get a divorce. Literally. His proposal was to split the country into two new ones: a ‘red’ state and a ‘blue’ state.

On a map accompanying the article, he proposed a division of the U.S. into the People’s Republic of Soyland and the Federalist States of America (no prizes for guessing Mr Kelly’s politics).

It’s a fairly crude map. For example, it includes Republican-leaning states such as Montana and the Dakotas in the ‘blue’ state for seemingly no other reason than to provide a corridor between the blue zones in the west and east of the country.

Mr Kelly admitted that his demarcational talents left some room for improvement: “We can and will draw the map and argue over it a million different ways for a million different reasons but draw it we must,” he wrote. “I suspect the final draft would look similar (to mine).” 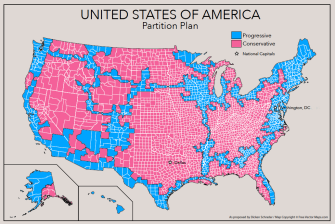 A county-level division between red and blue, with contiguous territories for both.

“No, this map won’t do,” comments reader Dicken Schrader. “It’s too crude and would leave too many members of the ‘blue’ tribe in the ‘red’ nation, and too much ‘red’ in the ‘blue’ state.”

Agreeing with the basic premise behind Mr Kelly’s map but not with its crude execution, Mr Schrader took it upon himself to propose a better border between red and blue.

Analyzing election maps from the past 12 years, he devised his own map of America’s two nations, “inspired by the original UN partition map for Israel and Palestine from 1947.” Some notes on the map: 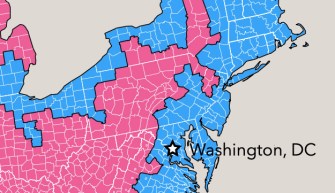 Washington DC would remain part of ‘blue’ America, and its capital.

Some interesting stats on these two new nations: 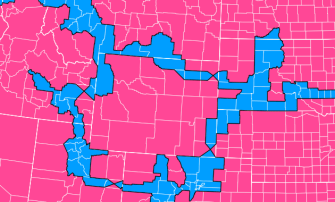 The partition would not create enclaves, but allow citizens of either nation frictionless access to the entire territory of their state.

What about the nukes?

‘Blue’ America would be roughly half the size of ‘red’ America but have almost double the population.

For those who think this divorce would end the argument between both tribes, consider that both countries would still have to live next to each other. And then there’s the question of the kids. Or, in Mr Schrader’s translation to geopolitics: “Who gets the nukes?”

Many thanks to Mr Schrader for sending in this map.

Could consciousness all come down to the way things vibrate?